Fly-half Rory Jennings, who is also comfortable in the centres, joined the Exiles after a stint in France with Clermont Auvergne.

Jennings joined the two-time French champions from Championship side Coventry, where he finished the 2019/20 season as joint-top points scorer.

The former Bath Rugby Academy member has represented England at under-16, under-18 and under-20 level.

He performed to high standard in his seven outings for the Exiles in the 2021/22 season, and despite having his season disrupted by injury, still registered 32 points.

His debut arrived with a brief cameo in an entertaining tie against Gloucester Rugby, with his first full start coming at Franklin's Gardens against Northampton Saints in the Premiership Rugby Cup.

Clutch kicking became Jennings' speciality in his opening games for Irish, taking them to a famous comeback draw at StoneX Stadium with the final kick of the game in the Gallagher Premiership, alongside his 11 points in the crucial 36-26 cup win over Saints. 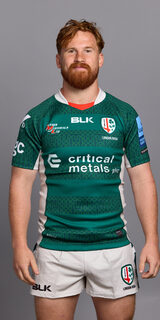