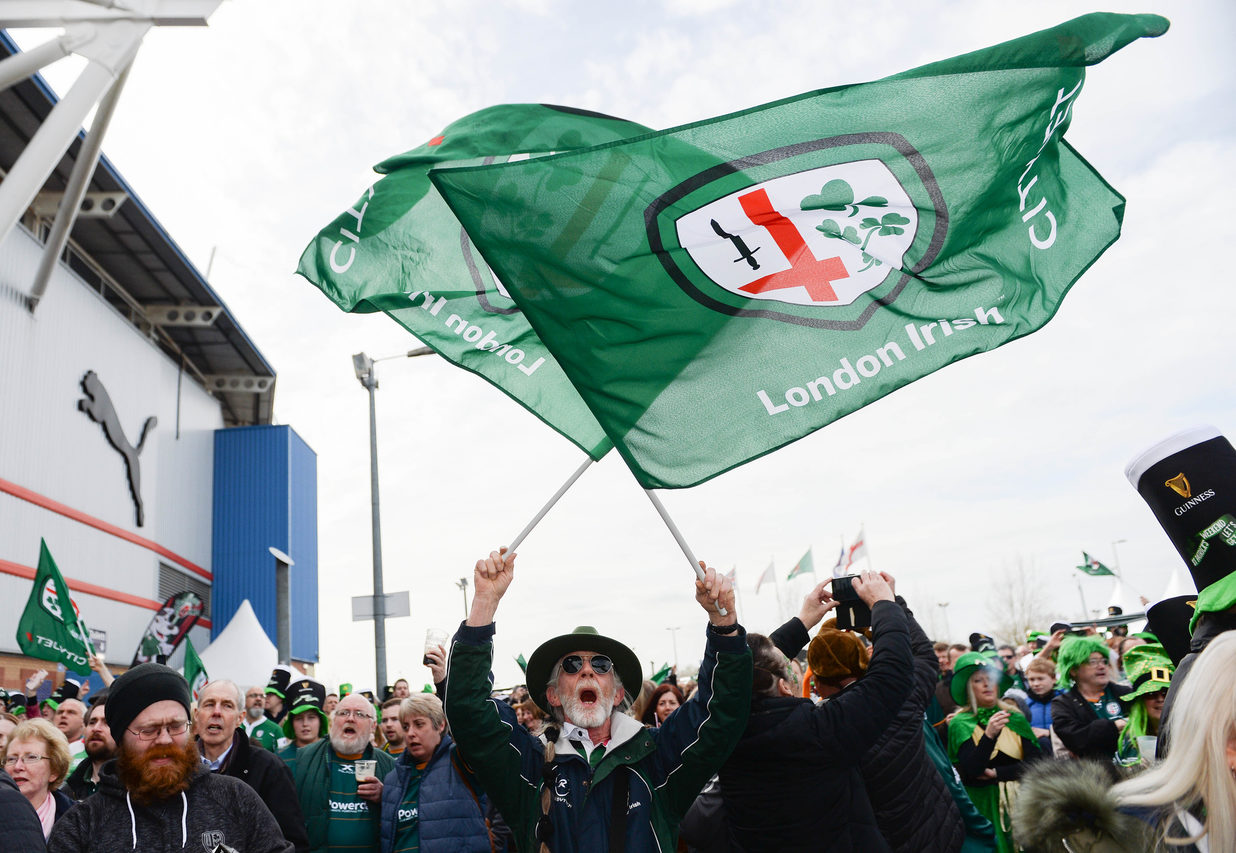 London Irish are back at the Madejski Stadium on Saturday 27 April for the last home game of the season and the final round of the Greene King IPA Championship against Ealing Trailfinders (kick-off 3pm).

The Exiles may have already won the Championship, but with the two sides finishing in first and second place in the league the game still promises to be a hugely competitive fixture. Off the pitch, there will be plenty of entertainment on the day including live music, the trophy presentation and a chance to say goodbye to the leavers - so make sure you're at the Madejski for the final time this season and help us go out with a bang!

Tickets are available from just £22 for adults and £4 for children online at ticketing.londonirish.net or by calling the Ticket Office on 0118 968 1016 (Monday to Friday 9am to 5pm, Saturday 9am to 12pm).

Please note that all ticket prices will increase by £3 on match day, so be sure to book in advance. Click here for full information on tickets and pricing.

Be sure to stay in your seats following the final whistle as London Irish will be presented with the Greene King IPA Championship trophy on the pitch at the end of the game.

The players who will be leaving the club at the end of this season will be welcomed onto the pitch after the game, and supporters will have the chance to say their goodbyes.

We are delighted to have the brilliant Emmanuel Smith performing on the pitch before kick-off. Emmanuel recently made it through to the semi-finals of The Voice and will be treating supporters with two songs in the build up to the game.

The Club Room will be open later than usual from 5.30pm to 7pm due to the activity on the pitch after the final whistle. There will be live music from Gavin Hayes and supporters will have the chance to congratulate the squad and say goodbye to the leaving players.

We're thrilled to be welcoming back a London Irish legend on Saturday - Barry "The Boot" Everitt will be at the game and we'll be catching up with him at half-time.

We will also be speaking to members of the London Irish Amateurs Ladies team, who have recently gained promotion to NC1!

London Irish is synonymous with the warm welcomes and genuine openness of Irish culture. Our club is one of inclusion, support and the best craic! Our hospitality packages will ensure you and your guests leave with fond memories that they take with them long after the game ends. Click here to find out more.

We're proud to have Below the Belt Grooming as the match sponsor for this game.

There will be a player signing session in the Megastore at 1.45pm.

We will be running a huge end of season clearance sale with some serious bargains on offer! The store will be open from 10am until 45 minutes following the final whistle.

Digger's Dugout will be in the North Stand concourse with a bouncy castle, free face painting and children's games.

We're pleased to have pupils from Cranmore School making up the Guard of Honour.

We are delighted to be supporting the Elizabeth Foundation, a charity that helps young deaf children learn to listen and talk.

Do you have a special occasion coming up? If you would like a message to be shown on the big screen during half-time, please email your message to [email protected] by midnight on Wednesday 24 April.

The final official match day programme of the season will be on sale for just £1! You can pick one up outside the Megastore and Gates 1 and 4.

There are a number of kiosks in the West Stand concourses selling a range of food and drink options including pies, hot dogs, gourmet burgers, pizza and soup, as well as crisps, chocolate bars and sweets.

A selection of hot drinks, soft drinks and alcoholic drinks are also available from the concourse kiosks including draught bitter, cider and Guinness and bottles of craft lager and real ale.

Parking is £10 at the stadium subject to availability. You can pre-book car parking through the ticket office by calling 0118 968 1016 or online at ticketing.londonirish.net up to 3pm on Wednesday 24 April.

The Madejski Stadium can be approached from the A33 Reading Relief Road which links to the M4 Motorway. Exit the M4 at Junction 11 heading for Reading on the A33. At the first roundabout, take the 2nd left onto the Reading Relief Road, passing the Stadium on your left. At the next roundabout (past McDonalds) take the first left onto Northern Way and follow signs to car parks. Click here for a map.

Reading Buses operate a frequent R1 service between the Southwest Interchange bus station by Reading Station and the Madejski Stadium on match days.

Returning from the Madejski, services depart from Northern Way after full-time and operate for around two and a half hours until 7.15pm.

Please note that you will need to pay in cash - £3.50 for an adult return and £2 for an under 19 return ticket. Click  here for more information.

Please be aware that stewards will be carrying out bag checks on entry to the stadium. We encourage you to only bring a bag if necessary and to leave extra time to enter the stadium. Please note that alcohol is not permitted to be brought into the stadium.

If you aren't able to make it to the game, you can follow the action on Twitter by following @LiRFC .