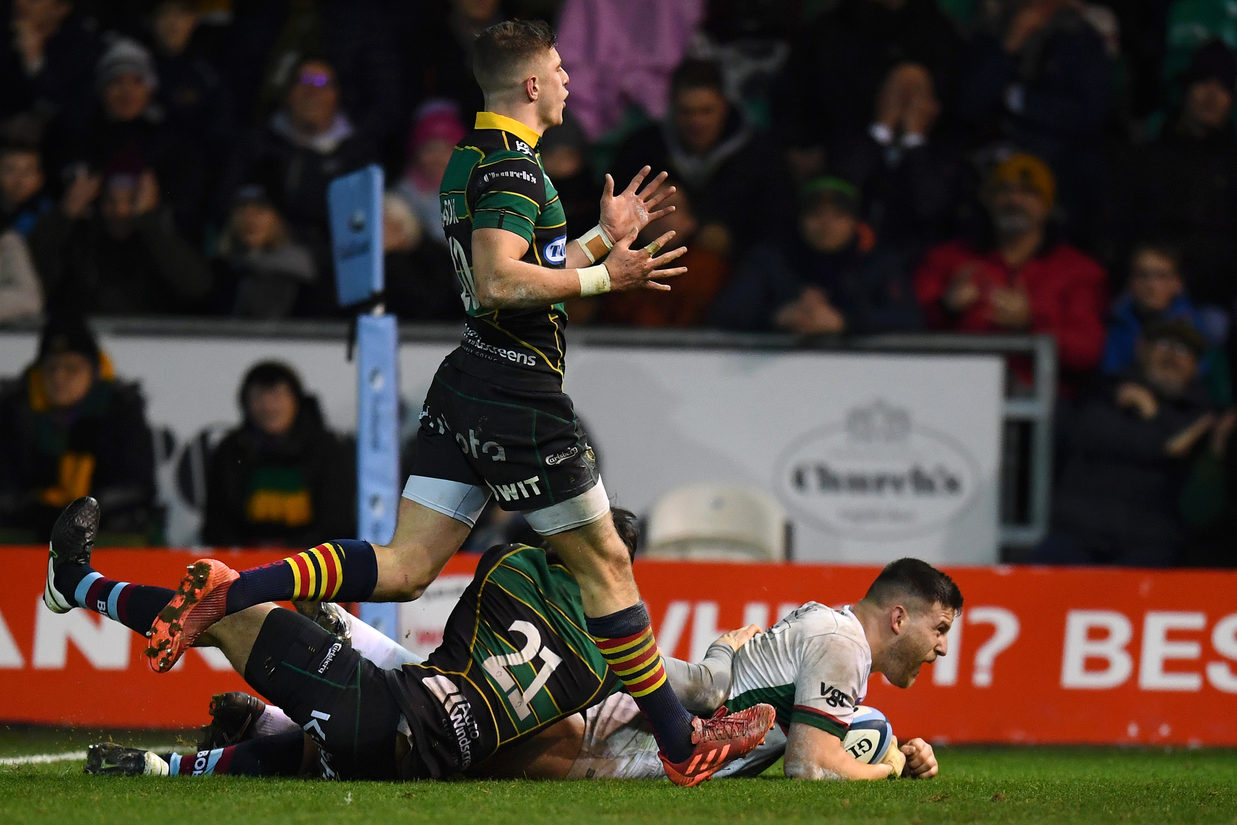 London Irish clawed their way to victory at Franklin's Gardens this evening, scoring two tries in the final five minutes to claim all four points.

Firstly, Franco van der Merwe went over and Stephen Myler converted to bring Irish back within one point of the Saints and then a last minute try from Dave Porecki, making his first premiership appearance of the season, and it was enough to take home the spoils.

Ollie Hassell-Collins crossed for Irish’s first try and Myler kicked five points on his return to his former club.

The opening moments were limited in terms of any real excitement and was dominated by an aerial kicking dual. Piers Francis went off injured on the 14-minute mark which saw a stoppage in play. All at London Irish wish Piers the best.

The Exiles crossed for the first try of the match after 17 minutes. Referee Tom Foley awarded Irish a penalty five metres out and rather than kicking for goal, captain Franco van der Merwe took the scrum. A composed set of phases saw Ben Meehan pass the ball wide to Ollie Hassell-Collins, who finished in the corner. Stephen Myler, on his first return to Franklin's Gardens, hit the woodwork with his conversion.

James Grayson replied with a penalty goal for Saints before Irish were once again in the ascendancy. With the visitors scrum dominant, Tom Foley awarded Irish a penalty under the Northampton goal posts only for Meehan to tackle Cobus Reinach off the ball and have the penalty reversed. Meehan was sent to the sin bin for 10 minutes.

Myler did kick Irish further in front whilst down to 14 men, but Saints South African scrum-half Reinach drew his team level with a trademark snipe from the base of the ruck. James Grayson added the extras to put Saints 10-8 in front.

The home side were testing the Exiles defence in the closing stages of the half and ill-discipline allowed Grayson to kick his second penalty goal on the stroke of half time. Saints led 13-8 at the break.

James Grayson had an early shot at goal in the second half, but his effort drifted wide.

A key moment in the game happened on 50 minutes. Northampton second row Api Ratuniyarawa was shown a straight red card for a shoulder clear out on Harry Elrington, meaning the home side would play for 30 minutes with 14 men.

The decision seemed to galvanise the Saints and their continued pressure and territory should have been rewarded but Grayson was unable to convert a fairly straightforward penalty kick.

The fly-half made amends only a few minutes later landing a more difficult attempt after Nick Phipps was yellow carded for a deliberate knock on. Northampton led 16-8.

Irish needed something special and they almost got it with some Curtis Rona magic to break clear. He passed to Ollie Hassell-Collins, but the winger was denied by a Reinach tackle and the ball was dislodged.

It wasn’t long until they did manage their second score, Franco van der Merwe diving over after some brilliant phase play from the Exiles. Myler’s conversion made it a one-point game with five minutes remaining.

It was a dramatic finish and it fell the Exiles way, literally. Adam Coleman charging down Henry Taylor’s attempted box kick and it fell fortuitously for Dave Porecki to gather and dive over for the match winning score. That was the last play and Irish had their third win in the Gallagher Premiership this season, winning 16-20.

Declan Kidney’s side now have two weeks off before the short journey to the Twickenham Stoop to play Harlequins on 15 February.