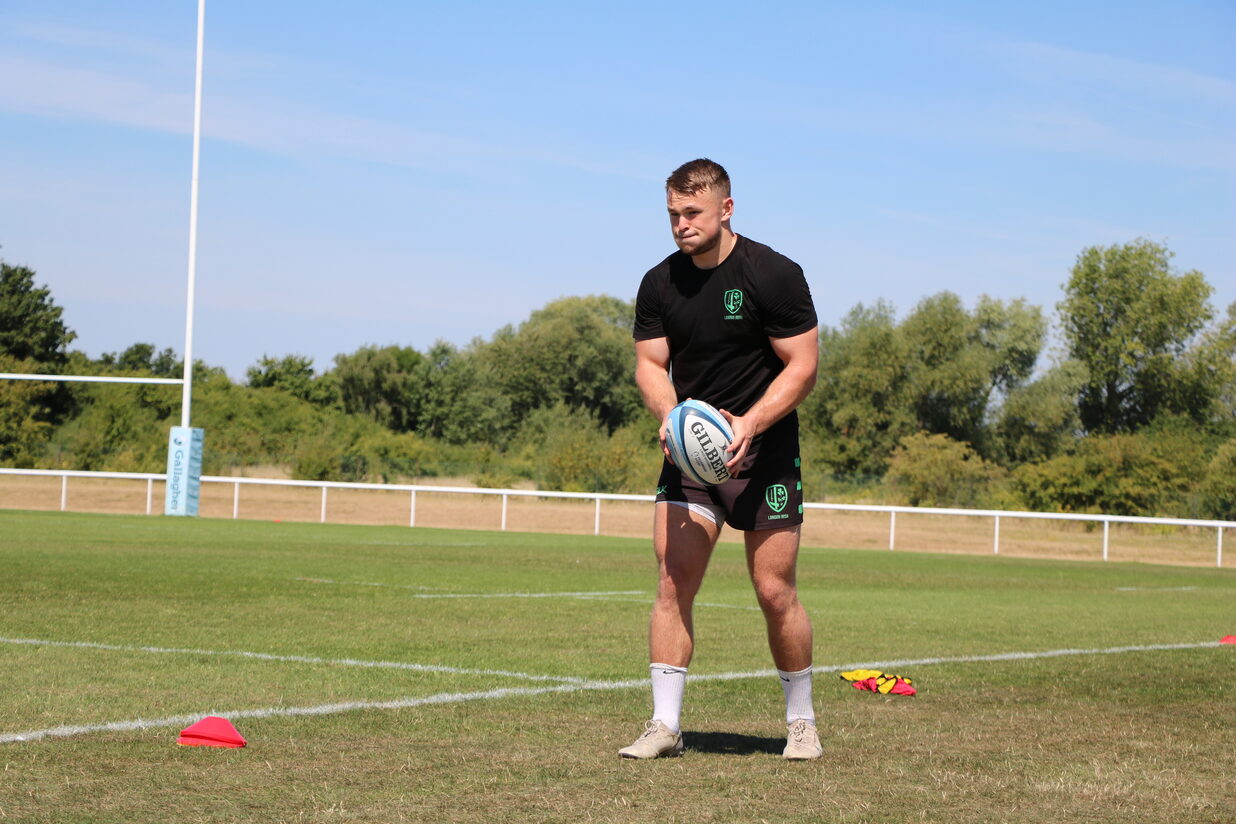 New signing from Exeter University Tom Hitchcock sat down for his first exclusive interview as a London Irish player after signing with the Club back in June.

Signing with the Exiles is “a dream come true” in the words of the Essex native, and he becomes another addition to the squad at Hazelwood directly from university rugby following Tom Pearson last summer.

No stranger to adorning the green and white, Hitchcock has now realised a lifelong ambition in signing his first professional contract and is raring to go ahead of the 2022/23 season.

“It has been a dream to become a professional rugby player for a long time now, so for it to come true now is amazing,” Hitchcock gleefully pronounced.

“London Irish is such a great Club and I’ve been a big fan over the last few seasons, particularly in how the Club play such an exciting brand of rugby.”

An indelible moment for Hitchcock and his family was arriving in west London to sign his contract, with the journey to matches from the Home Counties now much more achievable!

“Myself and my family were very excited when I finally put pen to paper on the deal.

“Hopefully I get to pull on the jersey sometime soon and they can come to Brentford to see me and the boys.

“They are from Essex, so the journey won’t be too bad and not as bad as heading down to Exeter to come and see me play at university!”

The attributes possessed by Irish’s new protégé could seemingly bed in well with the Irish style of play and are poised to rouse the Exile Nation next season at the Brentford Community Stadium, a point of motivation for Hitchcock.

“I would say my strengths are my ball carrying ability and trying to get my team over the gain line, but also having the subtleness with my hands and passing ability- I can’t wait to showcase it to the fans and the team.

“I haven’t had the chance to head down to the Brentford Community Stadium just yet, but speaking to the boys they’ve already let me know how buzzing it can get on gameday so it is something I have set as a personal goal for this upcoming season.”

Despite it being his first permanent move into the professional arena, operating within a professional environment is nothing new to Hitchcock.

Local Gallagher Premiership side Exeter Chiefs came calling in their last Premiership Rugby Cup campaign and offered him the chance to experience life on the field under the Sandy Park lights in their Round 4 tie against Worcester Warriors.

“It was very professional down in Exeter, and I also had the opportunity to train with Exeter Chiefs as well so I would say it has been a smooth transition,” Hitchcock delineated, who played the full 80 minutes in the 31-29 win over Warriors.

“Operating within a professional setting has been something I am used to, which has helped.”

“It gave me a taste of what I wanted for the future, also.

“I think it was around 10,000 people on the night which was an awesome experience and is something I only want to experience further.”

The last year with Exeter University was an historic one, with Hitchcock contributing four tries in their BUCS Super Rugby National Championship success including in the final win over Durham University, finishing 14-13.

Their Super Rugby trophy lift was the Devonshire side’s first in six years, having twice lifted the league title in 2018 and 2019 but it was their first championship win since the reformed competition in 2016.

“It was awesome, BUCS is a great league, and it tests you physically and mentally every week.

“There’s no easy team that you can play either, so it’s put me in good stead to come here, develop and play physical rugby.”

A now well-trodden route of progression out of university level rugby has seen many a junior talent link up with Premiership and Championship outfits, with Hitchcock stating that players making a name for themselves has inspired others, including himself.

“Players like Tom Pearson have shown me that it is possible to progress from university rugby to the professional game.

“Tom and others like Alex Dombrandt and Luke Northmore are the pioneers of it really, so credit to them.

“It’s allowed students like me to push on and then for Clubs to sit up, take notice and look at these students.”

Sam Skinner of Exeter Chiefs and Scotland fame beside Harlequins’ Tom Lawday are two current players to have progressed from Exeter University in recent years, with Hitchcock now etched on the list of those who have advanced into rugby in the first tier.

“I think there will become a more popular avenue for players and Clubs to take in the future when looking at young players.

“Even having a few conversations in the gym with the Academy boys, they are asking about routes through universities such as Exeter or Durham University, and having experienced it all, I think it will only increase in popularity.”

From former university stars to now playing in company with some of the game’s biggest names, the young back is savouring the opportunity of taking to the field with some of the Exiles’ household names.

“There are massive names like Paddy Jackson, Curtis Rona and others that have been great to watch from the touchline since I’ve joined, so I can’t wait to join them and play well for London Irish.

“With it being my first season, I just want to learn as much as I can.

“I will speak to the coaches and senior players every week and take it day by day, and hopefully play a few games for London Irish.”

You can book your place to see Tom Hitchcock and his new teammates take to the field at the Brentford Community Stadium next season with your own Season Ticket, available here.