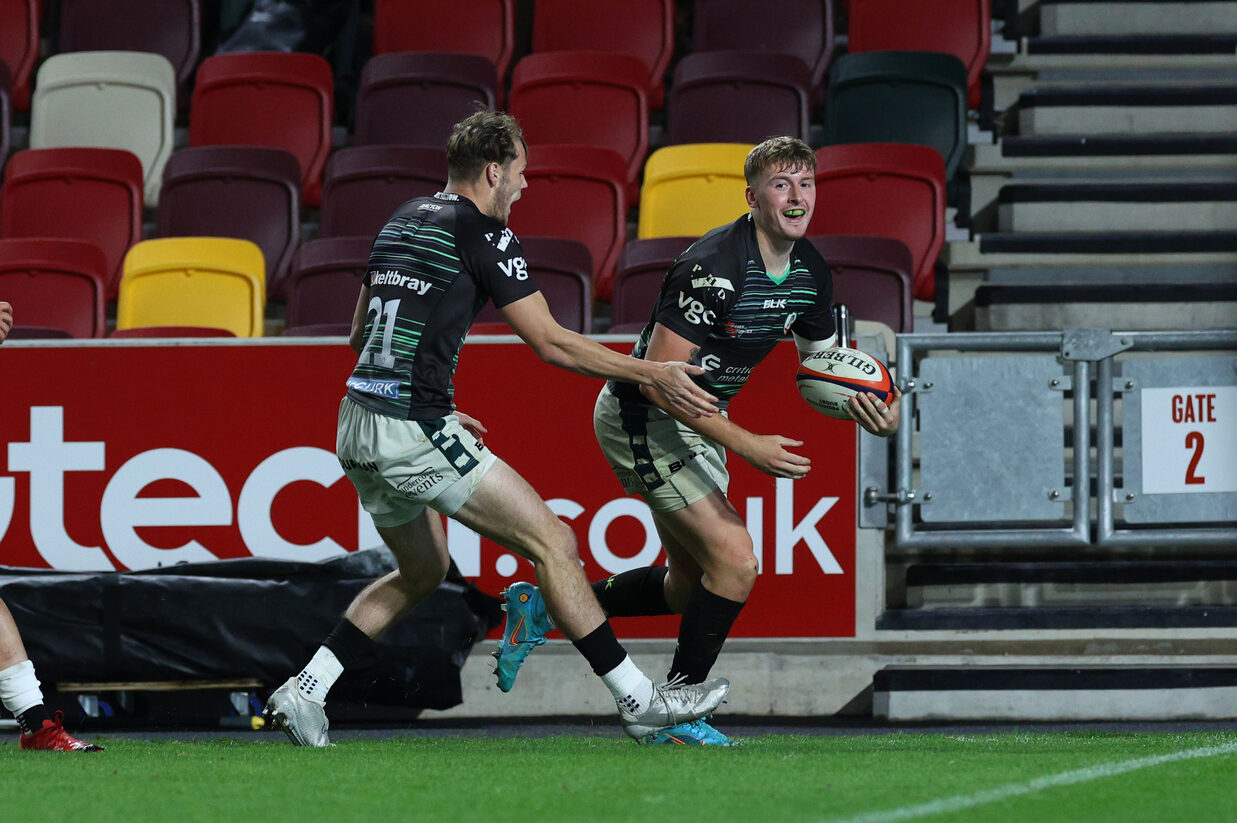 The path to contributing to Irish’s current two wins from two in the Premiership Rugby Cup didn’t come easy for Logan Trotter.

London Irish’s new signing, announced on the day of the Club’s first cup meeting of the 2022/23 season against Harlequins, has faced a tumultuous time in rugby with intermittent injuries prohibiting a nascent career from truly taking off until this point.

That’s not to say Trotter has been totally limited; he is a product of the Glasgow Warriors Academy, appearing for the Scottish side in pre-season friendlies and being capped by Scotland’s under-20s and Sevens sides.

Moving north of the border in his youth for his father’s work, the Harrogate-born 24-year-old tells of his beginnings in the sport and being welcomed into the fray in what became his adopted new home in Stirling.

“The first thing my dad done, even before finding me a primary school, was put me into a rugby Club!” tells Trotter.

“That turned out to be Stirling County, where I played mini rugby, junior rugby and all the way up to the senior side.

“I spent all my childhood there, my friends were there, and I was very involved and connected with the Club.”

Irish acquired the pacy back from Stirling County, playing in the first team from the age of 17 to partaking in the Super 6 tournaments up until this summer.

The Scotsman has had his fair share of difficulty in his time on the field which has led to time off the training paddocks, as he explains.

“I was able to play for Scotland under-20s for two years, representing them in the 2017 Under-20 Six Nations but just before the World Championships, I was injured and was then unable to go into that, which was really unfortunate.

“In the second year of my time with the 20s, I played throughout that year of the Under-20 Six Nations and had the opportunity to go to the World Championships in France again.

“Things started picking up again after that rugby-wise, but I suffered another injury having dislocated my shoulder.

“I was out for half a season with that, so that was another setback but once that year finished, I had come out of the Glasgow Warriors Academy and went back to Club rugby for a couple of seasons with Stirling, and kept my head down and was focused on them.

“I had a season in Glasgow’s Senior Academy, which was around the sort of time that I was able to play which was really great but I wasn’t kept on, which was gutting.” 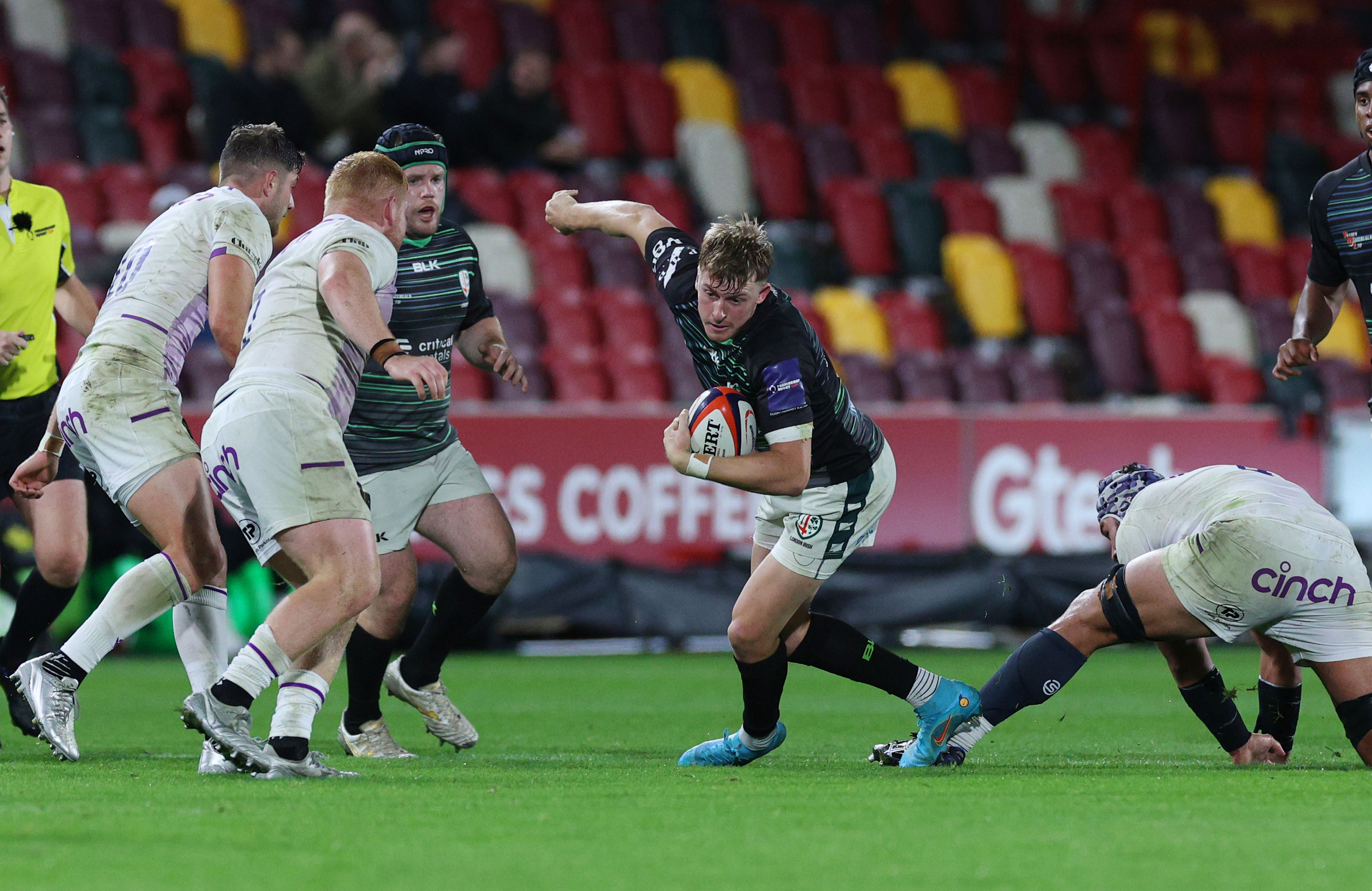 The coronavirus-enforced shutdown of rugby activity had potential to put another halt to progression in the youngster’s rugby, but an avenue into the sevens code looked to offer him an alternative.

“Covid hit shortly after, and everything paused for me - rugby had shut down, I was a bit stuck really.

“I was invited back to play with Glasgow around this team last year, after getting back up and going and staying injury-free for a while.

“I played a pre-season run-out for them, came back in the Monday morning and dislocated my finger pretty badly, which put me out for another four months.

“I eased my way back in with Scotland Sevens and they began going off to various competitions, Glasgow asked if I was available again but I began to get a bit frustrated.”

With uncertainty looming over his consistent place in the Warriors set-up, Trotter pivoted to honing his craft with his hometown Club.

“I wasn’t really enjoying my rugby at the time, my head was all over the place and I just wanted to look at playing Club rugby, as Stirling’s season was just starting.

“Staying injury free and getting a run of games under my belt was the main priority, which I made clear and I went on to what I felt was my best period of rugby so far.

“After last season finished, I had a break, went on holiday and Glasgow reached out again to enquire about me playing a part going forward in a dual role with Stirling, which I felt was more promising as I would be in and around the team more.

“A week before Warriors’ pre-season games, which I was scheduled to play in, I got the call from Les [Kiss] and the prospect of playing for Irish came up.

“In the back of my mind, I knew I always wanted to go and experience something fresh and take my rugby further and I never really had the opportunity to do that during Covid, there would be different chances but there would be problems with Visas, or travel wasn’t possible.” 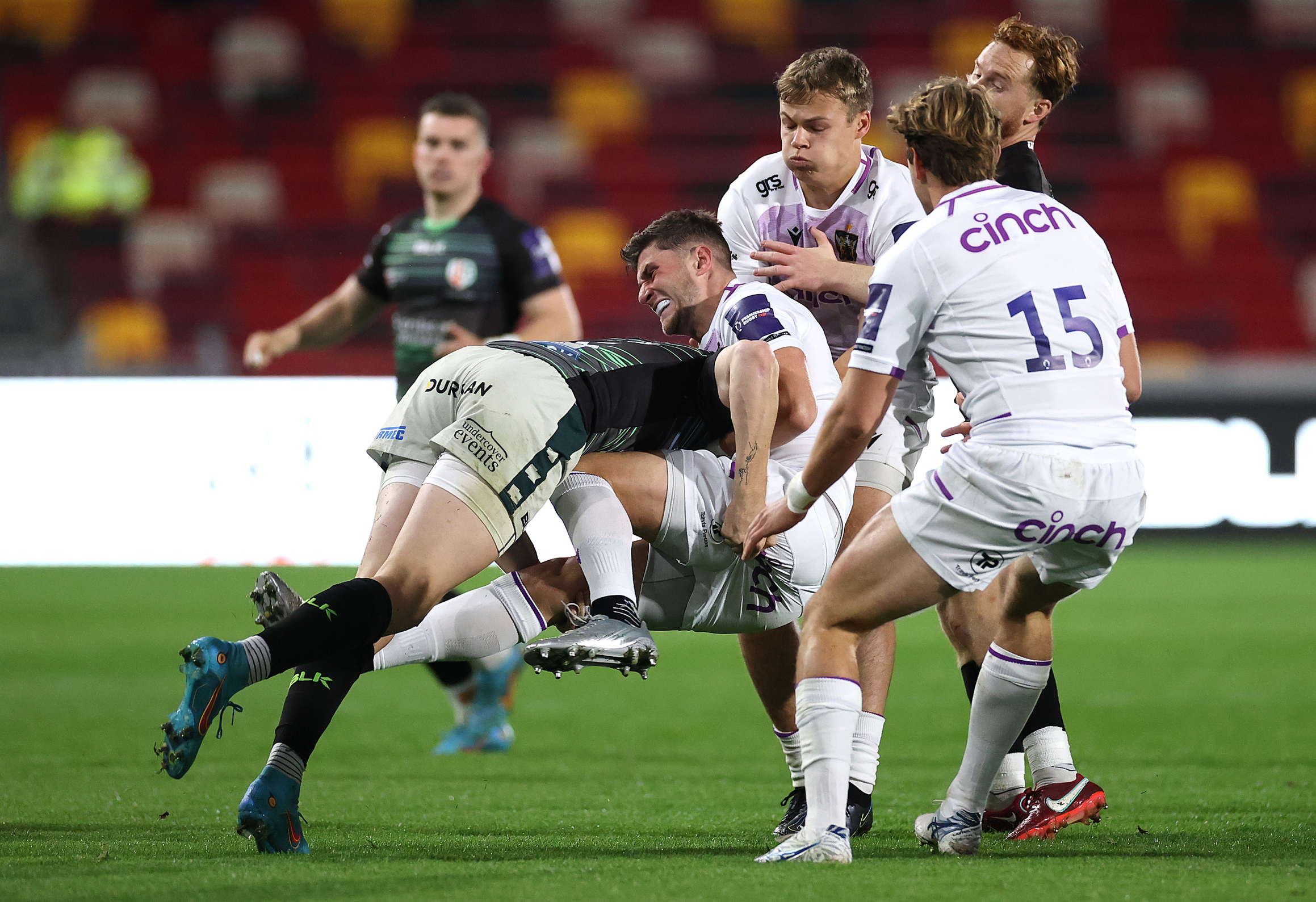 Irish’s attacking intent would seemingly marry well with Trotter’s previous style of sevens playing with his country, with which he found beneficial in a positional switch only recently trialled out at Stirling this year.

Another former Scotland Sevens player within the Exiles’ ranks would prove pivotal in Trotter’s decision to swap Stirlingshire for London.

He explains: “I felt that once I came out of sevens rugby, I got the chance to play full-back for Stirling after playing on the wing.

“I liked it, but I felt as though I was always more suited to playing at full-back – I just loved the freedom that came from that, I could roam, do my own thing and express myself.

“I had watched clips and read articles about Irish when talks were going on about me coming down here and looked at the brand of rugby.

“I knew Kyle Rowe from our time in Scotland under-20s together, and he spoke about how it was the best decision of his life to come down here because he loves the environment, the way the Club wants to play and the way they do play is just a very exciting, fun brand of rugby.

“It was good getting his perspective and hearing someone who had experienced it first hand, given that he was in a very similar situation to me.

“At that point, it sold me as the place I need to be.”

Trotter also speaks highly of the surroundings he has joined in Sunbury-upon-Thames, describing the grounded nature of his new Clubmates.

“I remember the first day I came down here for my medical, I called my parents just to say how it all went.

“I remember telling them about walking into the dressing room, and there are no egos.

“It’s a nice feeling knowing you’re walking into a friendly environment, everyone chats away to you and asks how you are. 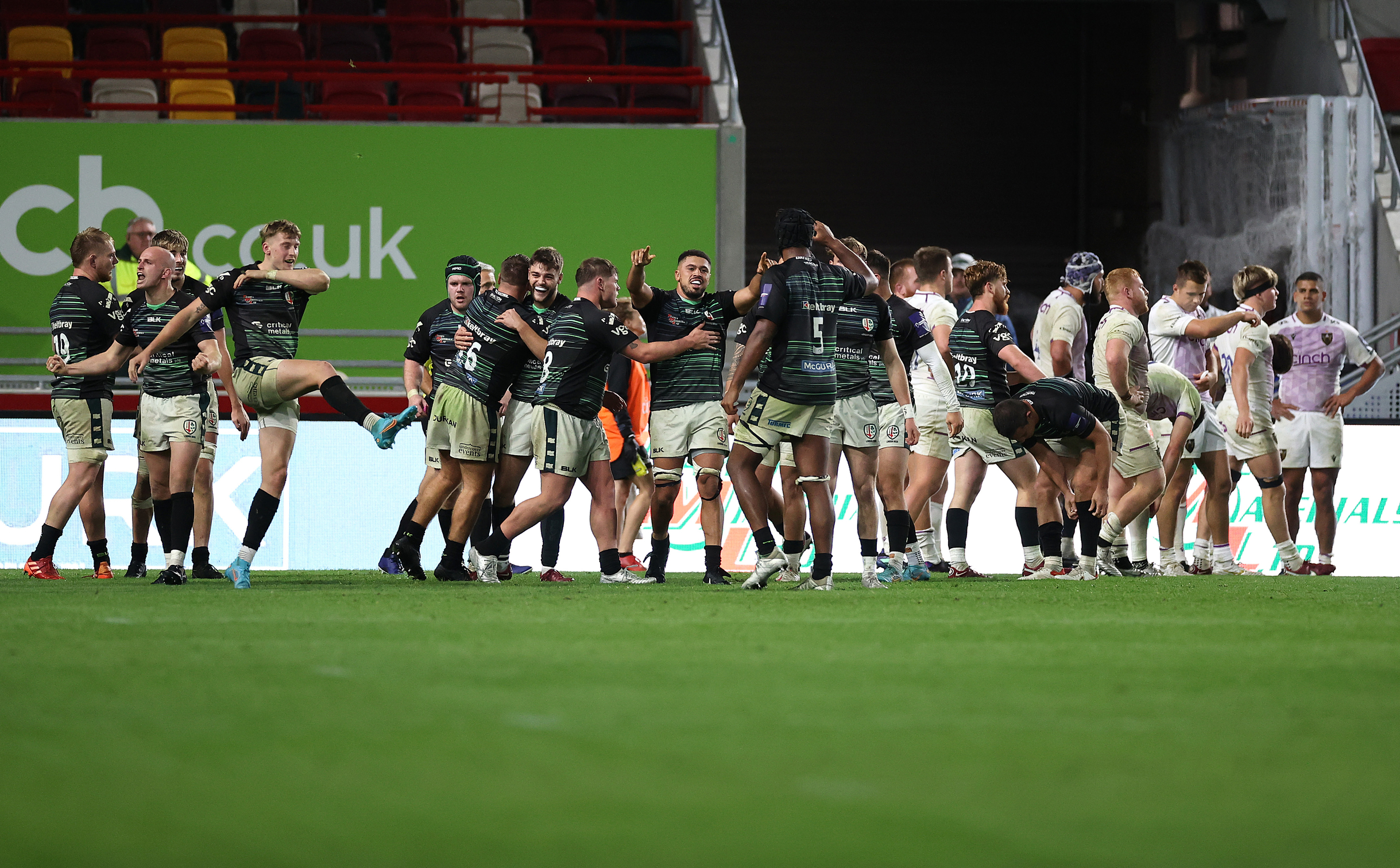 Joining a squad with internationally recognised talent across positions is a “huge honour” as Trotter describes, no less so than in the outside back department.

With half of Irish’s back line of Academy stock, the new addition elucidates on the mutually beneficial culture of learning to further progress the Club’s talent.

“It’s definitely a huge honour to be part of this team and backs group, it has such huge talent across it.

“Going into training, you are all learning from each other and pick up little tips to apply to your own style.

“It’s a massive learning process the whole way, a lot of the guys in and around my position are pretty young so we’re all absorbing as much as we can in along the way.

“The guys have been in the league for a couple of years and have seen a lot, and can anticipate things that are coming so I can take in a lot from them.

Recounting his first experience at the Gtech Community Stadium when Irish took on Northampton Saints in the second round of the Premiership Rugby Cup, Trotter looks back on his novel try for the Club and the madness of the comeback win.

London Irish trailed 19-0 at the break to Phil Dowson’s Northampton Saints in the second round of the Premiership Rugby Cup last week, in what was his first experience of the Gtech Community Stadium.

What followed, was a second half comeback seldom seen since the inception of the tournament in 2018.

“I’ve been involved in some games like that before, but not with such high stakes!

“Before the game started, I walked out on the pitch and looked around it all, and took a few minutes to soak it all in.

“It’s a lovely stadium and has a nice feel to it, and then once you’re involved in the game the fans are great – shouting, chanting and banging on the chairs, it gives you that extra adrenaline knowing you have the supporters behind you.

“It was a bit of a weird try, obviously a bit of luck involved but sometimes you need that in games like that,” Totter confessed of Irish’s third of four scores to pull back the game.

“I remember Jacob [Atkins] going down the touchline and he was about to get put out.

“He threw it back in, and did so quite well as it came of the Northampton player and fell into my hands and with no one in front of me, I just crashed over.

“It was a nice feeling to get your first try for the team, but especially where it was so tight and when big moments in that second half really counted.” 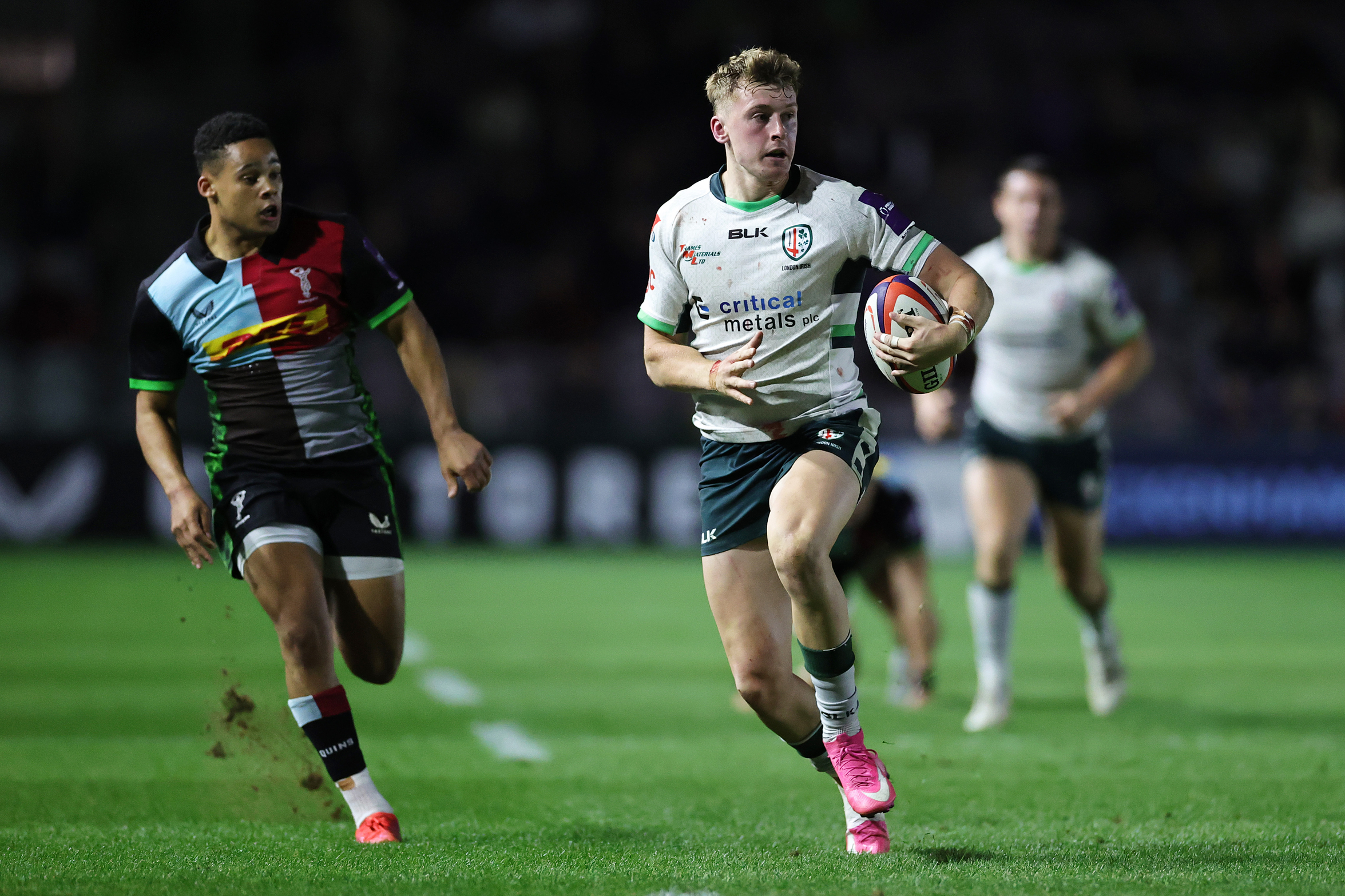 It was against Harlequins when Trotter actually gained his first appearance in an Irish jersey the week previous, a game no less frantic when the Boys in Green also returned five points from the Stoop.

“That was another crazy game, and probably one of the toughest I’ve played in,” Trotter divulged.

“Even with 70 minutes gone, I felt as though I had nothing left, my legs were gone, and I was just exhausted.

“The physicality and speed of the game really took it out of the team, all the boys agreed after how challenging it was up against Quins.

“Being new down here, I realised how the other boys knew each other from different teams but also knew what they were about and the rivalries between them.

“I personally didn’t realise until I got into the game what a rivalry it really is, and it was always going to be a one-two punch game where each team came at each other with everything they had.”

Playing his first two games in the Premiership Rugby Cup offered an insight into the mindset of the Club in approaching the tournament.

Having reached a cup final as a Premiership side for the first time in two decades last term, Trotter and the team’s focus remains in the immediate short term ahead of thoughts of replicating such a run.

“There hasn’t been any talk of that this season, we’re taking every game that comes one-by-one and looking more at ourselves more than anything.

“We’re focusing on what we can do as a team, as we have a really talented bunch of boys at Irish that all know of our capabilities if we know we can get things right.

“It takes the pressure off you somewhat, knowing that you are going out there doing your job to the best standard, results and everything else will follow.”