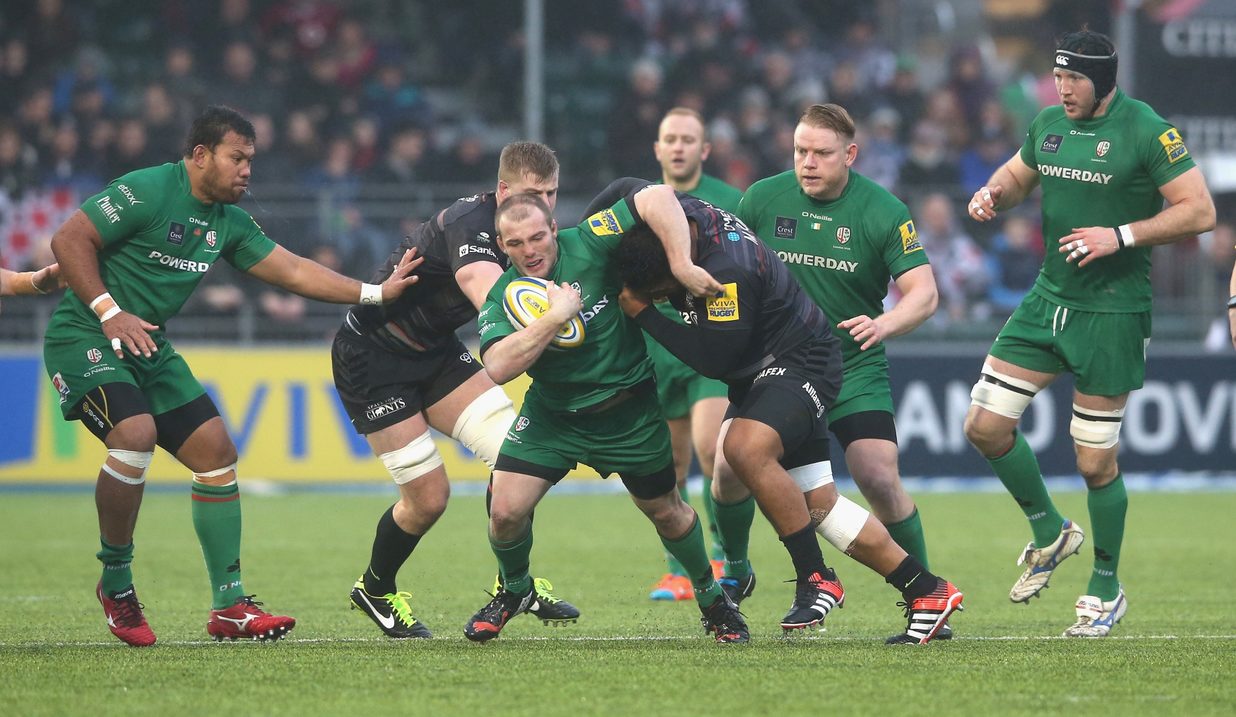 London Irish travelled to Allianz Park to face Saracens in their first match of 2015.

Irish, who were beaten by Saracens in the dying seconds earlier in the season, went into the game hoping to build on their Boxing Day win over London Welsh and start 2015 in winning ways.

Director of Rugby Brian Smith made four changes from the side that won on Boxing Day; handing a first Premiership Start to Harry Allen. Conor Gilsenan also started on the flank, Eamonn Sheridan in the midfield and the welcome return of Ofisa Treviranus at number eight, who was a late withdrawal from the side last week.

On a wet and windy day at Allianz Park it was Saracens who ran out 22 – 6 winners. The first half saw the conditions get the better of both sides, leaving a half time score of 11 – 0 in favour of the hosts. Irish started the second half strongly, picking up two quick penalties from the boot of Tom Homer but a second try from David Strettle and two further Owen Farrell penalties saw the hosts home.

As the rain fell the opening phases saw both sides look to use the conditions. Both teams put up high balls and looked to dominate territory, the greasy conditions resulting in the opening ten minutes featuring a string of scrums as neither side made any real headway.

Tom Homer had a chance to break the deadlock after eighteen minutes of play. Saracens were penalised at the break down, allowing Homer a 50 metre shot at goal. However, the full back’s kick just fell short and the score remained at 0 – 0.

Minutes later it was the hosts who had a chance to get points on the board. After Irish were penalised at the breakdown Owen Farrell went for the corner.  The Irish pack repelled the advance up front and as Saracens spread it wide they won a second penalty after three attempts at crossing the Irish line.

Off the resulting penalty Farrell this time opted for the posts and the fly half made no mistakes, breaking the deadlock after twenty-three minutes. A second Farrell penalty four minutes later left the score at 6 – 0.

David Strettle crossed for the first try after half and hour. Billy Vunipola picked from the base of a scrum before the hosts spread it wide for Strettle to cross in the corner. Farrell was unable to add the extras, leaving the score at 11 – 0 which is how remained until the break.

Irish struck first in the second half. After Saracens were penalised in the maul Tom Homer stepped up to take the penalty and claim Irish’s first points of the game, bringing the score to 11 – 3 after forty four minutes.

The Exiles’ bright start to the half continued. After they won a penalty deep in their own half Scott Steele took it quickly to release Alex Lewington. The winger showed his pace to get around the defence before offloading to Homer.

Saracens were penalised at the breakdown, giving Homer a chance to close the gap once again and make it 11 – 6.

Saracens got two penalties of their own, however, soon after. Own Farrell struck them home for the hosts, leaving the score at 17 – 6 with just over twenty minutes left to play.

Strettle crossed for a second try after 61 minutes. After winning a penalty Saracens opted for the corner, drawing the Irish defence in to give Strettle the space to cross from short range in a carbon copy of his first half effort. Farrell was unable to convert, making it 22 – 6.

The closing phases saw Saracens look for a third try. They came close on a few occasions but each time Irish held them out. The Irish defence soon caused Saracens to knock it on, bringing the game to a close with a final score of 22 – 6.

London Irish will hope to see a return to winning form next week when they welcome Exeter Chiefs to the Madejski Stadium on Sunday 11 January.