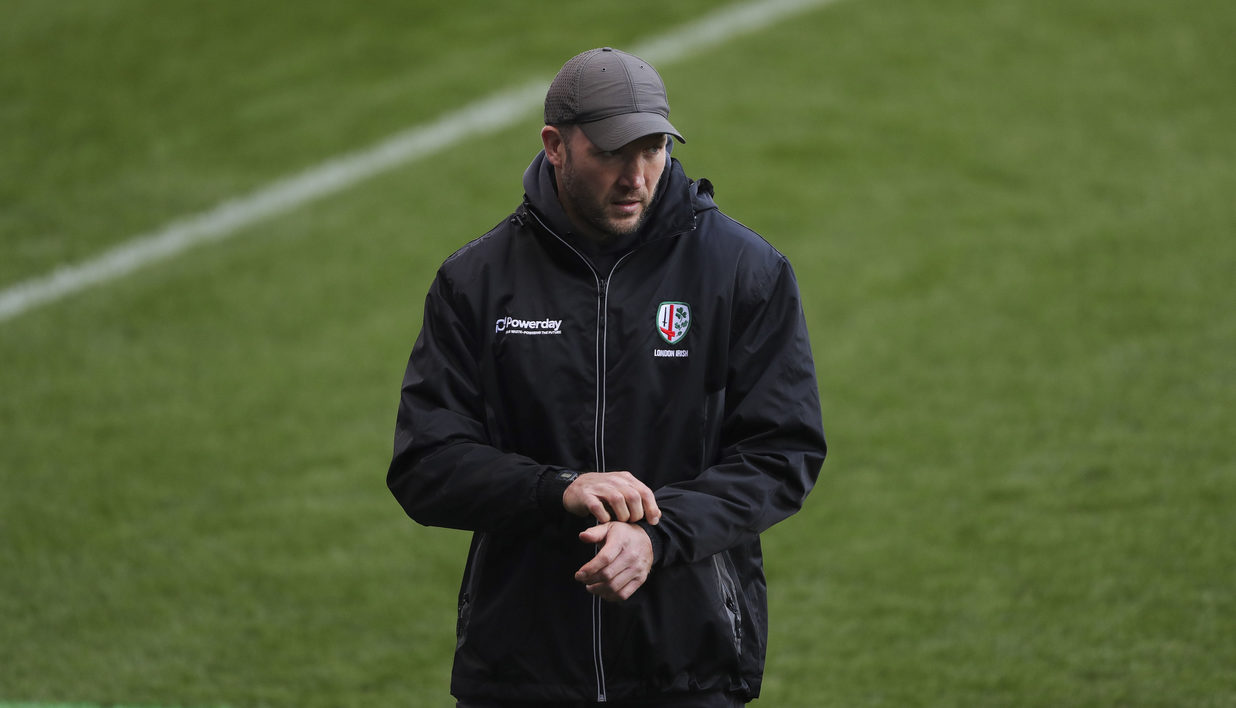 London Irish returned from a two-week Gallagher Premiership break to produce a determined performance in difficult Storm Dennis conditions to walk away from the Stoop with a bonus point victory.

“We had a game plan, we turned up, the conditions were difficult, but the lads adapted well. It is nice to win anywhere and in local derby it’s nice to get a result in that as well” said London Irish assistant coach George Skivington.

“Right at the back end of last week when you do your plans, this storm hadn’t been mentioned, said Skivington.

“You have a plan in place for how you beat Harlequins on an average or good day weather wise, obviously as the week went on and the storm was reported we had to adapt a few bits, but we still wanted to play rugby.

“We didn’t want to tuck it up the jumper and try play like that, I  thought we attacked the game as much as we could, we stuck to our game plan as much as we could and Stephen Myler and Franco van Der Merwe up front had their conversations and managed our way through the game, it wasn’t perfect, but it was a good representation of us.”

Curtis Rona crossed for two tries and Adam Coleman was effective around the park and at set piece. Both were mentioned to Skivington for their performances by the media after the match.

“We worked hard on recruitment as to what sort of people we wanted to bring in and they had to be quality rugby players as well.

“I think from a forward’s point of view Adam has really added value and in the line-out he is a real presence and Curtis was great today, especially his work rate and pressure and he got a couple of tries off the back of it.

“We said at the beginning of the year that you have to come in and earn the right to play, whatever you have done before, has gone before and that’s it. To be fair to those boys they have worked hard, earn’t the respect of the lads and are delivering.

Ben Donnell made his first Premiership appearance for the club, after two weeks of playing for England U20’s in the 6 Nations. On a weekend which sees the London Irish U18s play in the U18 League final, the senior Academy member, who has come through the Club’s programme, looked at home amongst players with far more experience.

“Ben Donnell was outstanding. He was called in late with Blair [Cowan] ill and has stepped up as if he was in the team all week. That hard graft, you can't put that in people it is just the way they are wired.”

Away wins at Northampton and Harlequins are difficult to come by, but nine points from a possible 10 in the last two matches has since the Exiles move to 22 league points.

“We have got a couple of lads that have never played in the Prem, I don't think they appreciate how hard it is to go and win at these places.

“Those of us who have been in the league a long time, we understand. As the season goes on, we will see how important these wins are, we will keep chipping away and try and get a few more.”