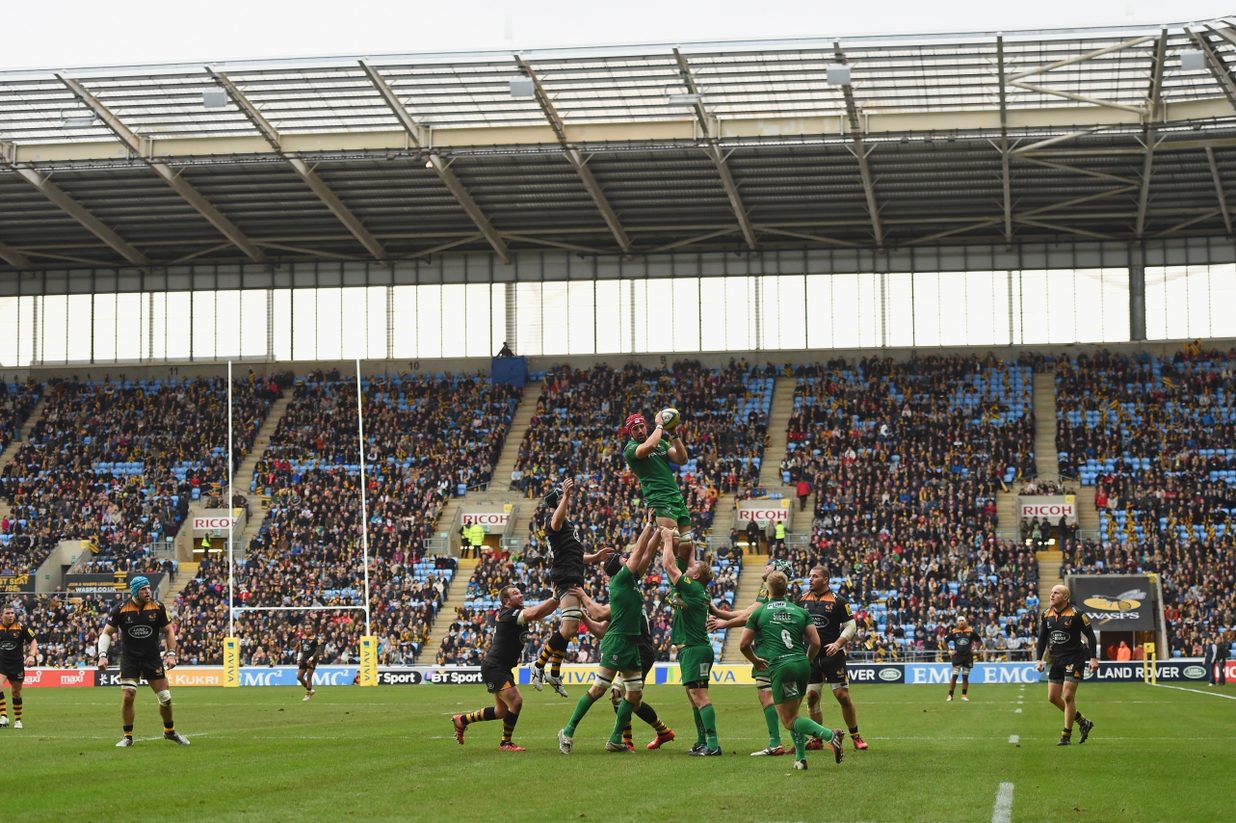 London Irish travelled to the Ricoh Arena on Sunday 21 December for their Round 10 Aviva Premiership clash with Wasps, the host’s debut at their new stadium.

Irish, who came into the game off the back of a crucial win over Cardiff Blues the week before to go top of their European Challenge Cup pool, were looking to carry this form into this week as attentions returned to the Premiership.

London Irish Director of Rugby, Brian Smith, named an unchanged side from the side that beat Cardiff. However, after being struck down by illness Kieran Low was forced to sit the game out meaning a start for Sean Cox.

In a highly competitive first half it was Wasps who went into the break with their noses in front. The second half saw the hosts run away, scoring four tires making the final score 48 – 16, 33 points for fly-half Andy Goode.

It was a tough day for Irish, made more difficult as they were on the end of a 20-5 penalty count by referee Tom Fowley.

Wasps were the first off the mark. Both sides started off testing each other with play held between the 22 metres. After possession exchanged hands several times Irish were penalised at the break down and Wasps fly half Andy Goode stepped up to claim not only the first points of the game, but also the first points at Wasps’ new home, 3 – 0.

Goode extended the lead soon after as Irish were again penalised at the break down in their own 22. The fly-half made no mistakes and bought the score to 6 – 0 after 14 minutes.

Irish struck back soon after with three Scots combining. Scott Steele disrupted Joe Simpson and the ball bounced to the feet of Blair Cowan. After collecting the ball he passed inside to Geoff Cross who crashed over the line for his second try in three games. Tom Homer added the conversion to make it 6 -7.

Goode reclaimed the lead for Wasps after 20 minutes. After Irish were penalised for a high tackle, the fly half had a simple kick to bring the score to 9 – 7. However, Homer stepped up four minutes later to take the lead for Irish, 9 – 10.

Andy Goode had a chance to reclaim the lead for the hosts after 32 minutes and duly delivered. Irish, penalised just inside their own half, gave the fly half a chance from 40 metres and he made no mistakes.

Minutes later Irish again gifted Goode points. After the Exiles were penalised once again inside their own 22 at the break down Goode stepped up to extend the lead to 15 – 10 with five minutes left of the half.

Homer struck back with a fine kick himself soon after. Wasps giving away the penalty on the half way line meant Homer had a 50 metre shot at goal which he slotted to make it 15 – 13. However, Irish again conceded a penalty off the restart for Goode to cancel out the kick, making the score 18 – 13 with a minute left to half time.

It was Tom Homer, however, who had the last say of the half. The full back made the most of a Wasps penalty, bringing the score to 18 – 16 at the break.

Wasps were the first to score in the second half. After a Wasps turnover Christian Wade broke free in open play, going 50 metres before off loading to Ashley Johnson who set up Joe Simpson in the corner to make it 23 – 16.

Goode, after missing the conversion, made up for it soon after. As Irish were penalised at the maul Goode extended the Wasps lead to 26 – 16.

As the Irish penalty count continued to build, David Paice was sent to the bin with 20 minutes left to play after Irish had spent most of the half camped out in the shadow of their own posts. Goode went for posts and further extended the lead, making it 29 – 16.

Goode continued to add to his points tally with 12 minutes left on the clock. After camping in the Irish five meter the fly half found a gap in the defence to crash over from short range. Goode converted his try to make it 36 – 16.

Wasps scored again minutes later, Elliot Daly crashing over this time and the conversion bought it to 43 – 16 with ten minutes left.

Irish came close to scoring  a try of their own late on. Eamonn Sheridan found himself held up in the corner and as they went for the try again they were penalised at the breakdown.

As the clock ticked in to the red, Wasps crashed over once more. This time Andrea Masi the one to touch it down in the corner. Wasps were unable to add the conversion, leaving the final score at 48 – 16.

Irish will look to get back to winning ways next week when they welcome London Welsh to the Madejski Stadium on Boxing Day.