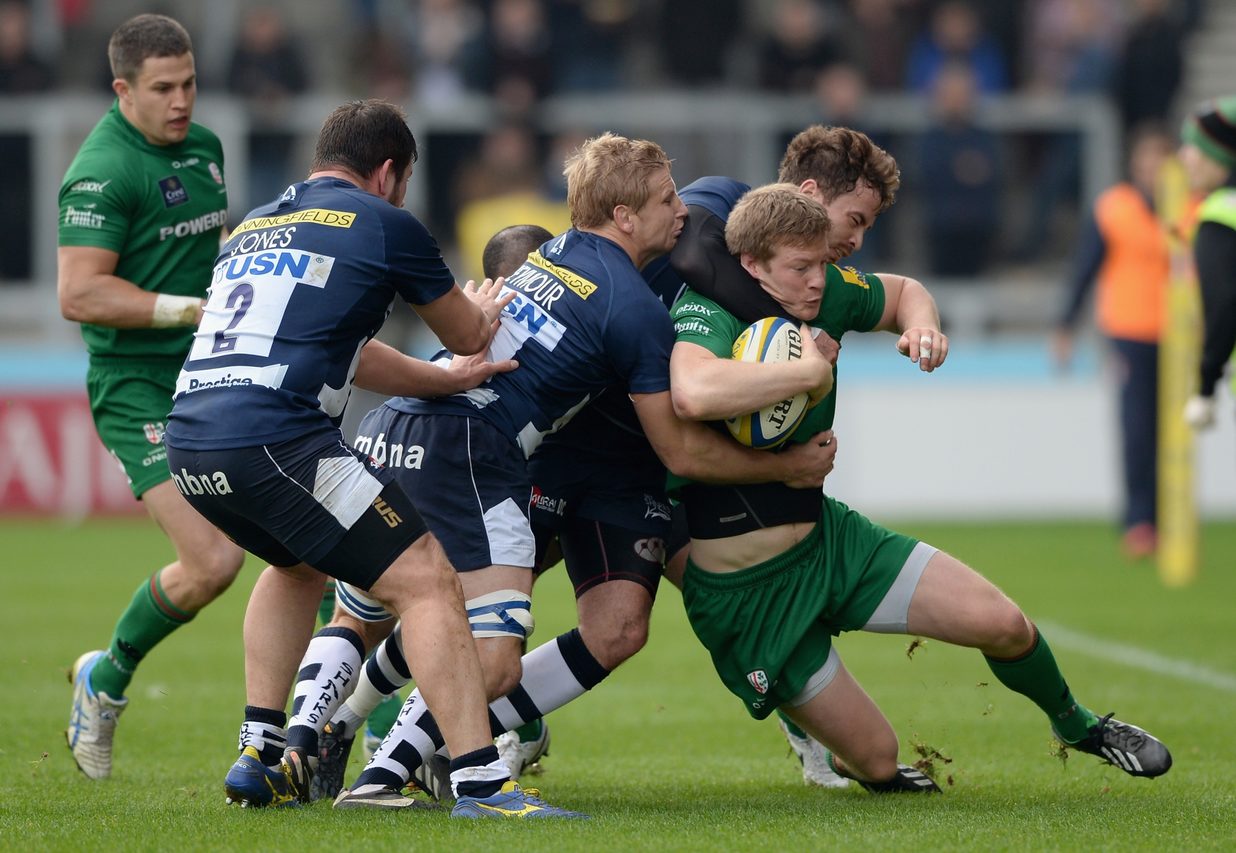 London Irish travelled to the AJ Bell Stadium for their round seven clash with Sale Sharks in the Aviva Premiership on Saturday 15 November.

Following a month away from the Premiership, due to the LV= Cup and the European Challenge Cup, Brian Smith returned largely to the side that featured in the previous rounds.

Due to a mixture of both players being away on international duty and those out through injury, there was a first Premiership start for Eoin Griffin and Sean Cox made his first appearance for the Exiles. Senior Academy player Ollie Curry also had his first chance to get his Premiership debut having been named among the replacements.

It was the hosts who dominated the game. Two penalty tries up front proved pivotal as London Irish failed to build any momentum and when they were reduced to 13 men with to two players sent to the bin Sale took their chances well to finish with a final score of 36 – 8.

Irish were the first on the scoreboard, fly half Chris Noakes landing a penalty from just inside the Sale half. However, after Irish were penalised at the scrum ten minutes later Sale responded well. Danny Cipriani went for the corner and following a clever line-out move Dave Seymour found his way over in the corner. Cipriani then extended the lead with the conversion to make it 7 – 3.

With ten minutes to go until the break Cipriani had a chance to make Irish pay for their ill discipline with a shot at goal. The fly-half duly delivered to bring the scores to 10 – 3.

The Exiles’ discipline let them down again soon after. David Paice was the guilty party and was sent to the bin. Cipriani stuck the ball in the corner as Sale looked for their second try.

The Shark’s line-out move was executed well and this time it was Dan Braid who scored the try. Cipriani was unable to convert the try and with two minutes to go Irish were left 12 points adrift at 15 – 3.

In the last play of the half Sale scored once more. Going for the maul again referee Matthew Carley awarded the Sharks a penalty try. Cipriani converted and with Luke Narraway also sent to the bin Irish were left with 13 men and a score of 22 – 3 as they headed down the tunnel.

The Sale pack won themselves another penalty try ten minutes into the second half. Irish defended bravely and held them out on three occasions but Sharks eventually got the try following a very strong five metre scrum. Cipriani added the extras to bring it to 29 – 3.

Irish almost scored a wonderfully worked try between Alex Lewington and replacement Scott Steele soon after however. The scrum half gave a good offload to Lewington who sprinted for the corner but the Sale defence scrambled across and following a TMO referral Lewington was deemed to have been in touch.

Irish came close again moments later. This time Fergus Mulchrone was the one to find a gap in the Sale defence. Mulchrone chipped the ball on for Andrew Fenby to chase. Sale again covered back and, under pressure from Fenby, hastily cleared their lines.

On their third attempt Irish did cross the line. Looking to restore some pride the Irish pack set up the maul five metres out and powered their way over, London Irish captain George Skivington the man to cross the line and claim the try making the score 29 – 8 with eight minutes to go.

Sale cancelled this try out soon after, however. Nick Macleod found a gap in the Irish defence before offloading to Andy Forsyth who dotted it down under the posts, Macleod converted making the final score 36 – 8.

Irish next face Bath in the Aviva Premiership when they welcome them to the Madejski on 22 November.