The award-winning Project Rugby community programme is delivered with pride by all 13 Premiership Rugby clubs, and London Irish is no exception. With the aim to provide more opportunities to experience rugby, it created an environment for Jake to overcome personal barriers which often prevented him getting involved in the game he loves.

The London Irish Foundation deliver Project Rugby to engage participants in the sport from underrepresented groups. These include disabled people and those from ethnically diverse or lower-social economic backgrounds.

Project Rugby, which is run by Premiership Rugby in partnership with Gallagher and the RFU, aims to increase participation in the game through delivery of sessions by community staff from each of Premiership Rugby’s clubs, at more than 200 locations nationwide.

London Irish is delighted to shine the spotlight on Jake during this season’s Community Weekend. All matches during round 21 of Gallagher Premiership Rugby (25-27 March) will be dedicated to Premiership Rugby’s award-winning community programmes, which benefit more than 250k people across England annually.

Jake has hypermobility which means basic skills required to play rugby such as bending down, getting off the floor and running fast can be a problem. Added to these are specific skills many people take for granted like kicking, long throws and tagging which all present challenges for Jake. To his credit, his condition has never dampened his passion for sport and his interest in rugby.

Jake attends a school in Reading where sport is on offer however due to the mainstream environment, he often struggled to take part. Despite his commitment to sport, always giving his best and enjoying what he can get involved with, there are limited opportunities at school for him on to engage in rugby, leading Jake to Project Rugby.

Attending Project Rugby has enabled Jake to use his positivity, patience and perseverance to not only improve his own skills but to take on a role supporting others with self-improvement. His enthusiasm is evident with the consistency of intelligent questions he asks coaches. This coupled with a steely determination has led to constant progression in his development on the programme.

Benjamin Nutt, Project Rugby coach says “We, as an organisation, have noticed such an improvement in Jake. His dedication to the objective of each session is evident to all who work with him.

“In acknowledgement to this he received a Player of the Week award whilst on the programme. Jake’s positive attitude really rubs off on other pupils... and his coaches!”

After attending the Project Rugby Disability festival last year Jake’s confidence has reached a level that he is now looking to join his local club, The Berkshire Brigands based at Reading Rugby Club.

“We are delighted to have been able to support Jake through Project Rugby. Rugby provides so many avenues for improved personal development. As Jake demonstrates, with determination and an open mind anyone can build a future in the sport.

“He shows exactly how important it was for Premiership Rugby to launch Project Rugby and we are thankful for the vital support we have received from Gallagher, the RFU and of course our clubs, like London Irish, who bring it to life.

“Project Rugby succeeds because it engages and develops new audiences through rugby and stimulates a lifelong interest in the game to enrich lives and give young people like Jake a brighter future.

“We've engaged thousands of participants through the delivery by community staff from our clubs, providing opportunities for people to participate in the game at a time and place that can be easily accessed by target audiences. We look forward to introducing many more to the sport we all love.”

Christian Kaye, Gallagher development executive and club liaison for London Irish, adds: “Josh’s inspirational story of how he has flourished in the inclusive and enabling environment of Project Rugby highlights everything we love about supporting this fantastic community initiative. As title partner of Premiership Rugby, we couldn’t be prouder to play our part in delivering Project Rugby on the ground and witness first-hand the confidence it builds and lives it changes, by positioning the game as a sport that embraces everyone.” 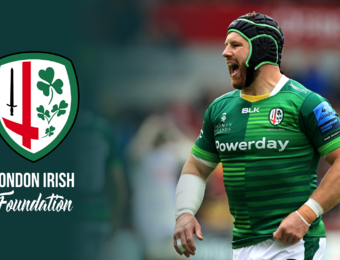