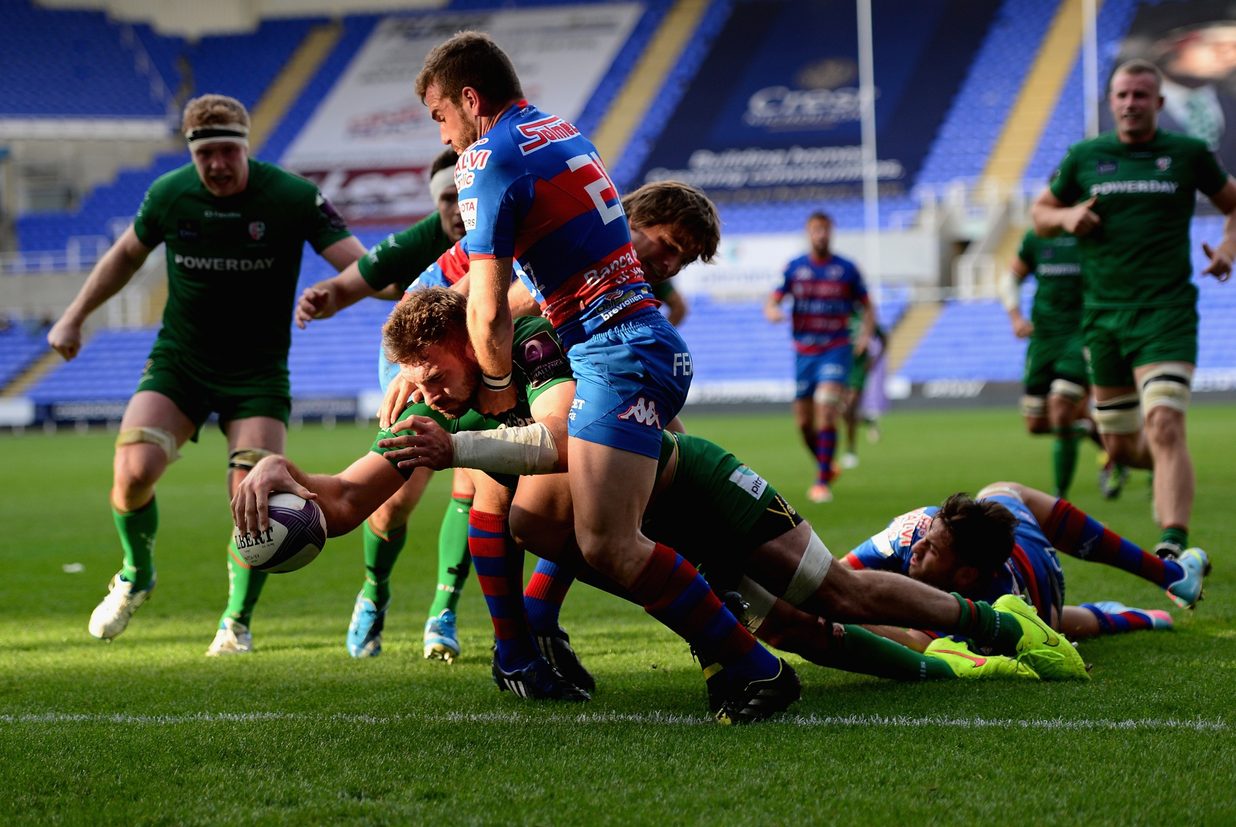 Irish put ten past Rovigo to start Challenge Cup with a bang, 70 – 14.

London Irish welcomed Italian side Rovigo Delta to the Madejski on Sunday 19 October for their opening game of the new European Challenge Cup.

Irish, showing off the depth in the squad this season, rested several players following a grueling opening six games of the Aviva Premiership season but still put out an impressive looking team, including debuts for new signings Dave Lyons and Eoin Griffin and a first start for another new signing Conor Gilsenan.

Rovigo, considered by some to be underdogs, had beaten Tbilisi Caucasians in the play-offs and Irish were expecting a tough encounter, as suggested by the strength of the team fielded by the Exiles.

It was London Irish who dominated the match, a perfect kicking performance from Myles Dorrian, converting 100% of The Exiles’ ten tries including a first half hat-trick from Topsy Ojo saw the hosts run rampant in this twelve try showpiece.

Irish started strongly, Topsy Ojo scoring his first in the corner. Ofisa Treviranus, returning from injury, and Dan Leo laid the foundations with powerful runs before captain Tomás O’Leary let the Irish backs loose and they made the most of their overlap for Ojo to dive in at the corner. Dorrian added the extras to make the lead 7 – 0 after just under five minutes.

Irish crossed again after twenty-four minutes. Conor Gilsenan linked up well with another of the new signings Eoin Griffin who ran 50 meters up field, stepping the winger. He then drew the last man and put Dorrian away on the reverse angle with a deft one-handed out-the-back off-load and the fly-half dived over the line. Dorrian converted his own try to bring the scores to 14 – 0.

Irish got their third on the half hour mark. Kieran Low smashed the ball up field, drawing in the defence to allow Eamonn Sheridan and Co to utilizs the space outfield and put Ojo in for his second. Dorrian again converted to make it 21 – 0.

Ojo made his hat-trick with two minutes to go before the break. The pack won a penalty at the scrum and skipper O’Leary took it quickly and passed inside to Dan Leo. This sucked in the defence allowing Griffin to break through the mid-filed and bring Ojo in on the switch. The full-back crashed over the line and the conversion from Dorrian bought the score to 28 – 0.

Irish started the second half much how they had finished the first. Dan Leo burst up field and into the opposition 22 and London Irish again spread it wide, this time Griffin the man in space to dot in down in the corner for a try on his debut. Dorrian converted from out on the touchline to make it 35 – 0.

Rovigo showed their resolve however after 47 minutes when they crossed for their first points of the game. A well worked five-meter lineout provided the platform for captain Luke Mahoney to cross. Full-back Stefan Bossan converted to make it 35 – 7.

Irish scored ten minutes later, Leo Halavatau crossing just moments after coming onto the pitch. The Irish pack looked to re-assert their dominance and pack mauled their way over for the try, and the conversion bought the scores to 42 – 7.

Kieran Low crossed for the hosts soon after to complete a quick double. Dorrian took a quick penalty and a miss pass from Ojo gave the flanker the space to bundle his way over in the far corner. Dorrian added the conversion once again from out wide to make it 49 – 7.

Replacement Tom Guest was the next to score for Irish. The number-eight picked from the base of the scrum before stepping his man and powering through the last defender to reach out and score. Dorrian continued his metronomic kicking display to make it 56 – 7.

With six minutes to go Irish crossed again. This time Dan Leo powered over, reaching out from underneath a pile of bodies to claim the try. Dorrian again converted to make it 63 – 7. James Short stepped and went from 50 meters moments later and showed his pace to beat Rovigo down the outside and swan dive over the line for Irish’s tenth try. Dorrian added the extras to make it 70 – 7 and maintain his 100% record.

Credit has to be given to Rovigo who got the last say in the match. The Italian side crossed for their second try of the game in the last play. Again from a five-meter line-out this time it was replacement Andrea De Marchi who scored. Davide Farolini converted to leave the final score at 70 – 14.

London Irish next face a tough trip to France to play Grenoble on Friday 24 October in their next European Challenge Cup match.