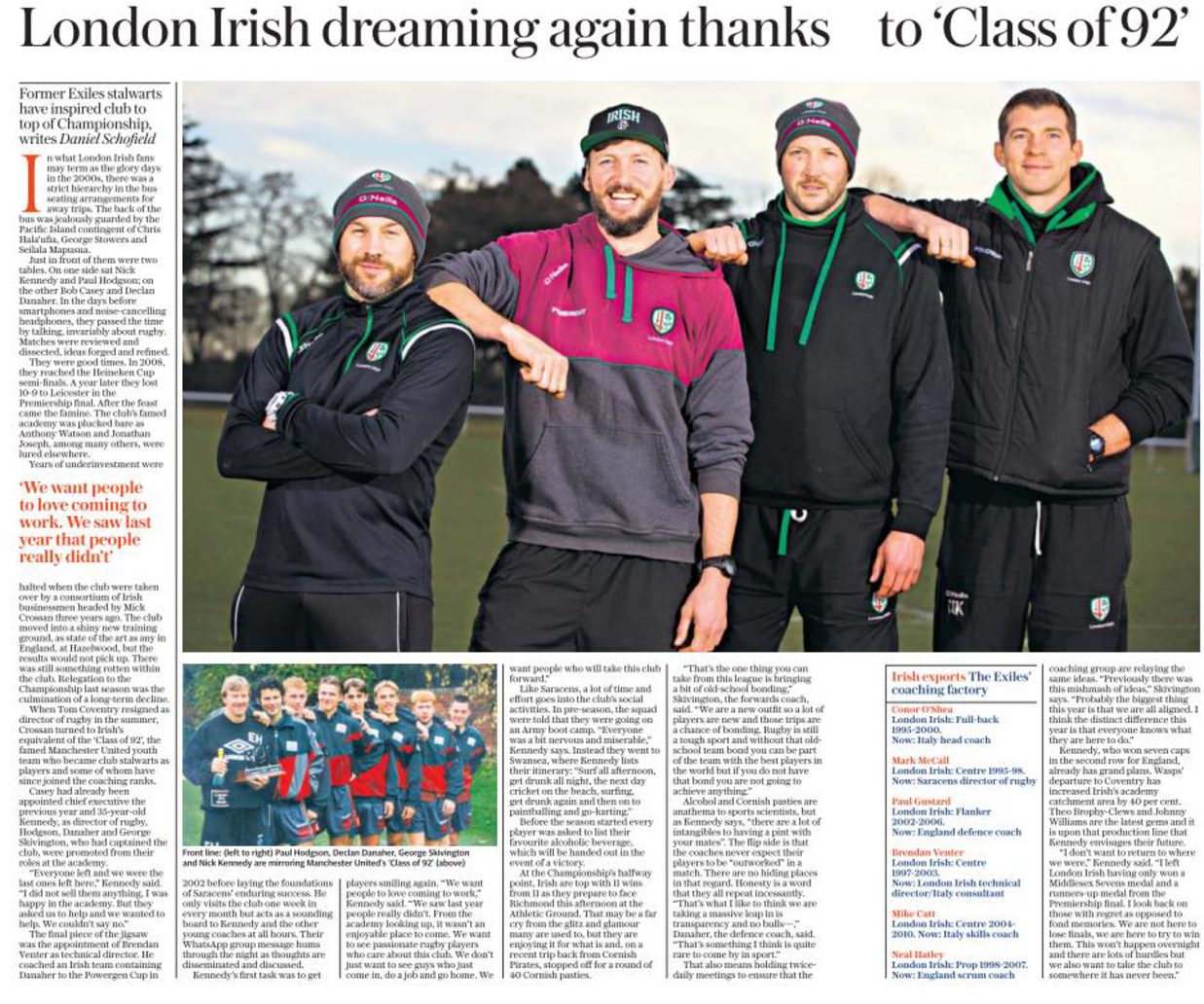 By Daniel Schofield of Telegraph Sport

In what London Irish fans may term the glory days in the 2000s, there was a strict hierarchy in the bus seating arrangements for away trips. The back of the bus was jealously guarded by the Pacific Island contingent of Chris Halaʻufia, George Stowers and Seilala Mapusua.

Just in front of them were two tables. On one side sat Nick Kennedy and Paul Hodgson. On the other Bob Casey and Declan Danaher. In the days before smartphones and noise-cancelling headphones, they passed the time by talking, invariably about rugby. Matches were reviewed and dissected, ideas forged and refined.

They were good times. In 2008, they reached the Heineken Cup semi-finals. A year later they lost to Leicester 10-9 in the Premiership final. After the feast came the famine. The club’s famed academy was plucked bare as Anthony Watson and Jonathan Joseph among many others were lured elsewhere.

Years of underinvestment were halted when the club were taken over by a consortium of Irish businessmen headed Mick Crossan three years ago. The club moved into a shiny new training ground, as state of the art as any in England, at Hazelwood, but the results would not pick up. There was still something rotten within the club. Relegation to the Championship last season was the culmination of a long-term decline.

When Tom Coventry resigned as director of rugby in the summer, Crossan turned to Irish’s “Class of 92” equivalent. Casey had already been appointed chief executive the previous year and Kennedy, as director of rugby, Hodgson, Danaher and George Skivington, who had captained the club, were promoted from their roles at the academy. “Everyone left and we were the last ones left here,” Kennedy said.

“I did not sell them anything, I was happy in the academy. But they asked us to help and we wanted to help. We couldn’t say no.”

The final piece of the jigsaw was the appointment of Brendan Venter as technical director. He coached an Irish team containing Danaher to the Powergen Cup in 2002 before laying the foundations of Saracens enduring success. He only visits the club one week in every month but acts as a sounding board to Kennedy and the other coaches at all hours. Their Whatsapp group message hums through the night as thoughts are shared and discussed.

Kennedy’s first task was to reacquaint faces with the sensation of smiling. “We want people to love coming to work,” Kennedy said.

“We saw last year people really didn’t. From the academy looking up it wasn’t an enjoyable place to come. We want to see passionate rugby players who care about this club. We don’t just want to see guys who just come in, do a job and go home. We want people who will take this club forward.”

Like Saracens a lot of time and effort goes into the club’s social activities. In preseason, the squad were told that they were going on an army boot camp. “Everyone was a bit nervous and miserable,” Kennedy says.

Instead they went to Swansea where Kennedy lists their itinerary: “surf all afternoon, get drunk all night, the next day cricket on the beach, surfing, got drunk again and then went on to paintballing and go-karting.”

Before the season started every player was asked to list their favourite alcoholic beverage, which will be handed out in the event of a victory. At the season’s halfway point, Irish are top with 11 wins from 11 as they prepare to face Richmond this afternoon at the Athletic Ground. That may be a far cry from the glitz and glamour many are used to, but they are enjoying it for what is and on a recent trip back from Cornish Pirates stopped off for a round of 40 Cornish Pasties.

“That’s the one thing you can take from this league is bringing a bit of old-school bonding,” Skivington, the forwards coach, said.

“We are a new outfit so a lot of players are new and those trips are a chance of bonding. Rugby is still a tough sport and without that old-school team bond you can be part of the team with the best players in the world but if you do not have that bond you are not going to achieve anything.”

Alcohol and Cornish pasties are anathema to sports scientists, but as Kennedy says, “there are a lot of intangibles to having a pint with your mates.”

The flipside is that the coaches never expect their players to be “outworked” in a match. There are no hiding places in that regard. Honesty is a word that they all repeat. “That’s what I like to think we are taking a massive leap in is transparency and no bullshit,” Danaher, the defence coach, said. “That’s something I think is quite rare to come by in sport.”

That also means holding twice daily meetings to ensure that the coaching group are relaying the same ideas. “Previously there was this mish-mash of ideas,” Skivington says. “Probably the biggest thing this year is that we are all aligned. I think the distinct difference this year is that everyone knows what they are here to do. Players have to work really hard, understand their role and we will work double as hard in the background making sure we tick every box so everyone is accountable for their role.”

Kennedy, who won seven caps in the second row for England, already has grand plans. Wasps move to Coventry has increased their academy catchment area by 40 per cent. Theo Brophy-Clews and Johnny Williams are their latest gems and it will be upon that production line that Kennedy envisages their future.

“I don’t want to return to where we were,” Kennedy said. “I left London Irish having only won a Middlesex Sevens medal and a few runners up medals from the Premiership final. I look back on those with regret as opposed to fond memories. We are not here to lose finals, we are here to try to win them. This won’t happen overnight and there are lots of hurdles along the way but we also want to take the club to somewhere it has never been.