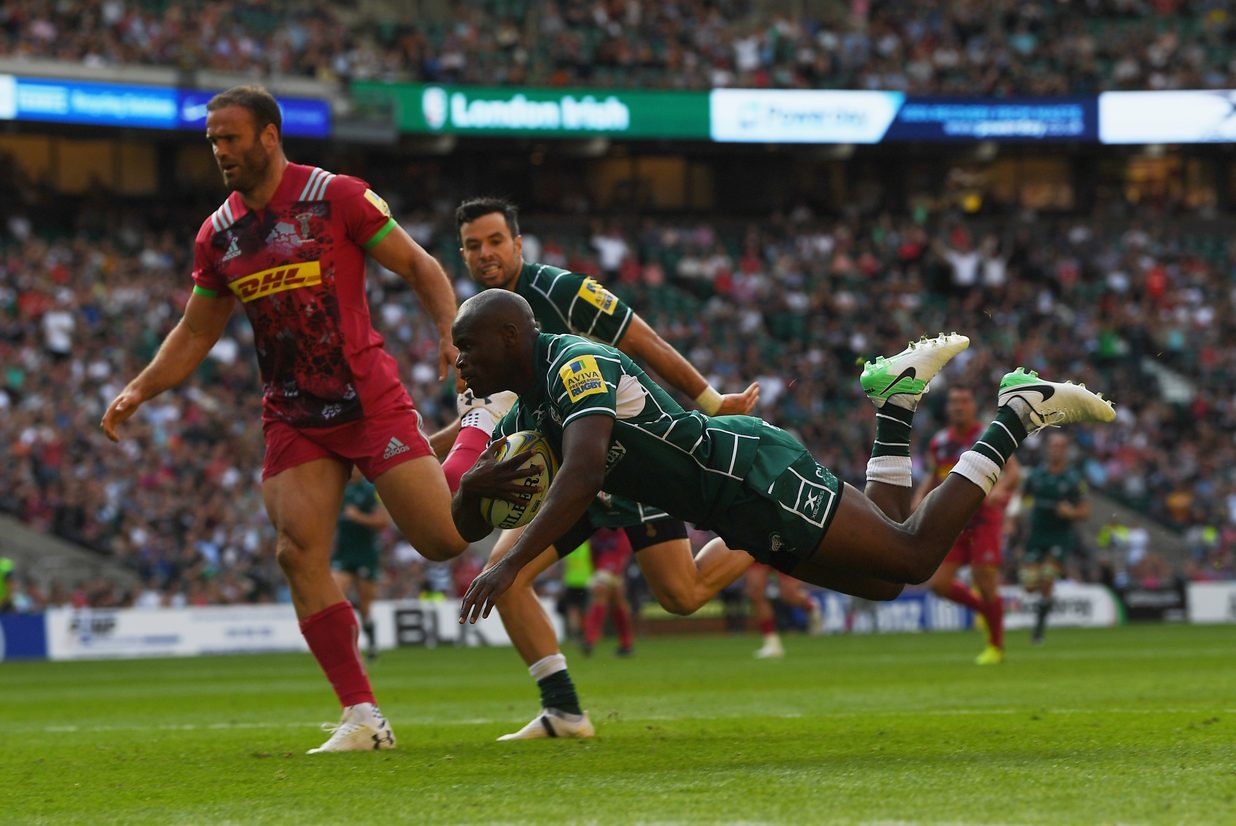 Sat alongside academy coaches Corin Palmer and Toby Booth as the ink dried on his first professional contract back in 2003, Topsy Ojo would never have thought he would eclipse London Irish’s appearance record.

Exiles legend Justin Bishop currently holds the record with 280 appearances, with Ojo set to surpass that in Paris this Saturday when Irish take on Stade Français in the European Rugby Challenge Cup.

Talent spotted while playing for Dartford Grammar School, then Exiles academy coaches Booth and Palmer developed the spritely young wing into the formidable finisher that has made him the club record try-scorer.

“I’m very proud to be on the verge of achieving the record and I’m looking forward to pulling on the London Irish jersey for many more games to come,” said Ojo, 32.

“I feel as good as ever and I’ve got the hunger to keep on going.”

Whether it is Ryan Giggs at Manchester United, Ben Kay at Leicester Tigers or Steven Gerrard at Ojo’s beloved Liverpool, one club men are a rare commodity in the modern era.

Enjoying an illustrious career which spans more than 12 seasons, Ojo played in both the 2008 Heineken Cup Semi-Final and the 2009 Premiership Final, moments that stand out for the London-born flyer.

“The calibre of players that we had at the time was incredible and we had guys who had come through the academy system as well as international talent. We did as much as we could to be successful and that’s all you can ask of yourself,” said Ojo.

“More recently, last season’s promotion winning campaign was a great moment for me and it was fantastic to be part of such a spirited team. On a personal note, I've picked up a few awards down the years, and it’s always nice for me and my family to be recognised individually.

“I’ve played under a number of coaches during my time at the club and each one has improved my game in their own unique way. There have been a lot of positive influences on me at Irish.

The landscape of the club has changed considerably during Ojo’s career with Irish, but one aspect that has remained is the strong culture.

Eulogising over the club’s famous team culture, Ojo said: “There is a fantastic feeling here at London Irish, a characteristic which has remained the same ever since I signed for the club.

“If you ask any player, past or present about their time at London Irish, I’m sure they will talk about the positive culture. It’s a very welcoming environment and I think had the club not been as friendly and positive as it has been, then I might not have been here for as long as I have.

“Supporters see the product on the pitch, but behind the scenes, whether it is the kitchen staff, the interns or the off-field offices, it’s very much a team effort.”

Breaking the record of former Ireland international Bishop, Ojo says he has a lot to thank him for when bursting onto the scene with London Irish.

“I played with Justin in the early stages of my career and I learned a lot from him,” said Ojo.

“He was the most energetic and enthusiastic player that I’ve ever worked with and he definitely made an impression on me when I first joined the club.

“To have broken the record is a very special feeling and I’m sure he will be sending me some abuse this week. Joking aside, he was brilliant for me and he was great to learn from along with Paul Sackey who was on the other wing.”

Ojo is now taking on the role of the likes of Bishop and Sackey as the next generation of backs come through the Exiles’ academy system. With an abundance of talent being nurtured at Irish, such as the likes of Joe Cokanasiga, Tom Parton and Ben Loader, Ojo is enthused about the future of the club.

“These days we all train together and you can see first-hand the young talent coming through at the club,” he said.

“We push each other on every day and at the same time they keep me on my toes with everyone wanting to be involved at the weekend.

Ojo’s playing career has had to move with the times, the professional game having evolved considerably during his tenure.

“If you don’t keep up with the way rugby is changing year in year out, then you’ll get left behind,” said Ojo.

“The game is getting faster and tougher every year, but it’s a great challenge and I still love being out there at the weekend playing for London Irish.

“I’ve focused on looking after myself and making sure that I’m in good condition. I still expect a certain standard from myself and I’ve been happy with my form this season. Hopefully that will continue and results will start to turn for the team.

“I’ve had the odd injury, but thankfully there haven’t been too many serious ones, which has helped me prolong my career. I’m already looking forward to adding more games to my current tally.”