As a player based south of the border, it may seem a daunting prospect entering the fray as part of the Scotland squad to partake the Autumn Nations Series.

London Irish’s Ben White was one of nine Premiership-based players in an initial squad of 40, with 10 overall not plying their trade for either Edinburgh Rugby or Glasgow Warriors.

It wasn’t the challenging prospect for White, however, such is the friendly culture created in the national team that the nine-cap international has bedded in seamlessly since his debut in the 2022 Six Nations.

The 24-year-old scored a debut try against England in a 20-17 final scoreline back in February, and he hasn’t looked back since.

“It’s a fantastic environment, I think the lads up there themselves are a great group of people who are very humble and hardworking,” White told.

“There’s a really good balance within the group that the coaches have created.

“We can get to a high-level performance side of things, and because your there for four to five weeks, also having a relaxing element once you’re off to create good relationships within the group and have a laugh.”

Qualifying for Scotland from heritage through his grandparents, White made the switch to adorn the navy blue as a former England under-20 international.

The fulfilment expressed by the half-back in pulling on the Scotland jersey is unshakable, with each appearance adding to a burgeoning affection for his country.

White explains the matchday experience in the Scottish capital from the perspective of a player.

“To get selected to be in the national team is something you dream of from when you start playing, and being able to represent Scotland and be part of that team on big days at Murrayfield fills me with a lot of pride.

“Once you get a taste of it, it’s something you want more of because there’s no feeling like running out at Murrayfield.

“It’s an electric place, once it’s rocking the fans are so vibrant.

“The whole build up to the game is done incredibly well; the fans will be there come rain or snow waiting for us to arrive, we’re welcomed with bagpipes, which is something you never forget, and to sing ‘Flower of Scotland’ along with the crowd, especially when the music cuts out gives you goosebumps- it’s epic!” 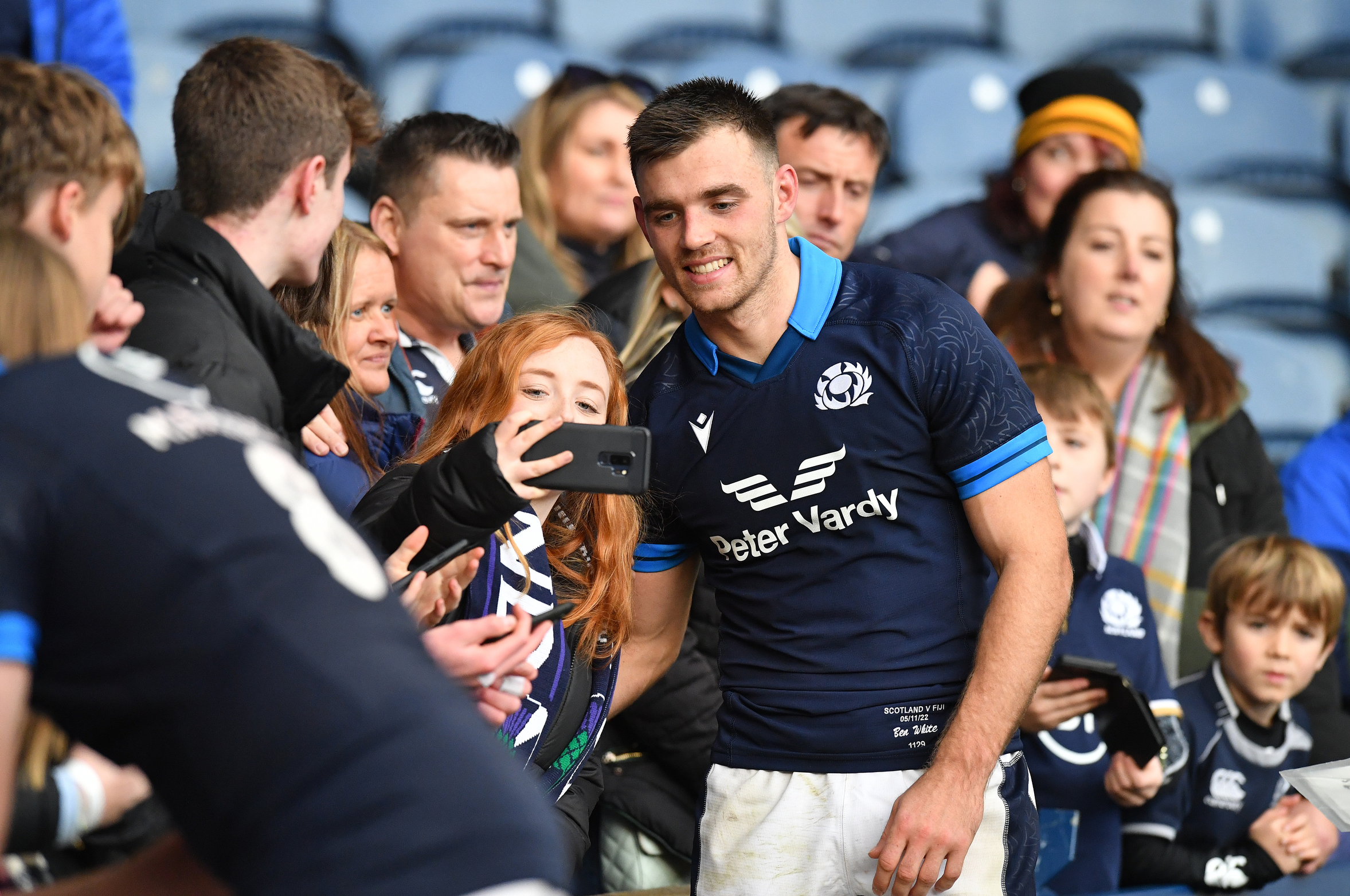 A second try for his country came a matter of weeks ago against Fiji, his first appearance this November for the Thistle to aid in a 28-12 win.

The win arrived after a sinking 16-15 opening day defeat against Dave Rennie’s Wallabies, a game White played no part in, with the win over the Flying Fijians the perfect tonic given what was to come against more threats from the southern hemisphere.

“I couldn’t not score it!” White jested.

“It was quite a big gap, they had gone down a man and put a back into the scrum and luckily, no one was there so I could walk in.

“It’s an honour to put on the shirt whenever I get the chance, so to score and get a win at Murrayfield felt amazing and was just what we needed after losing to Australia to give us momentum going up against New Zealand.”

The All Blacks awaited at BT Murrayfield a week later, a first meeting in five years between the storied nations which share a rich history of immigration and culture.

In search of a novel win over the New Zealanders, Gregor Townsend’s side performed commendably to fight back against an early 14-0 deficit to lead 17-14 at the break.

Scotland led well into the fourth quarter, but a revival from the tourists 15 minutes from time saw an turnover in fortunes spearheaded by Mark Telea and Scott Barrett. 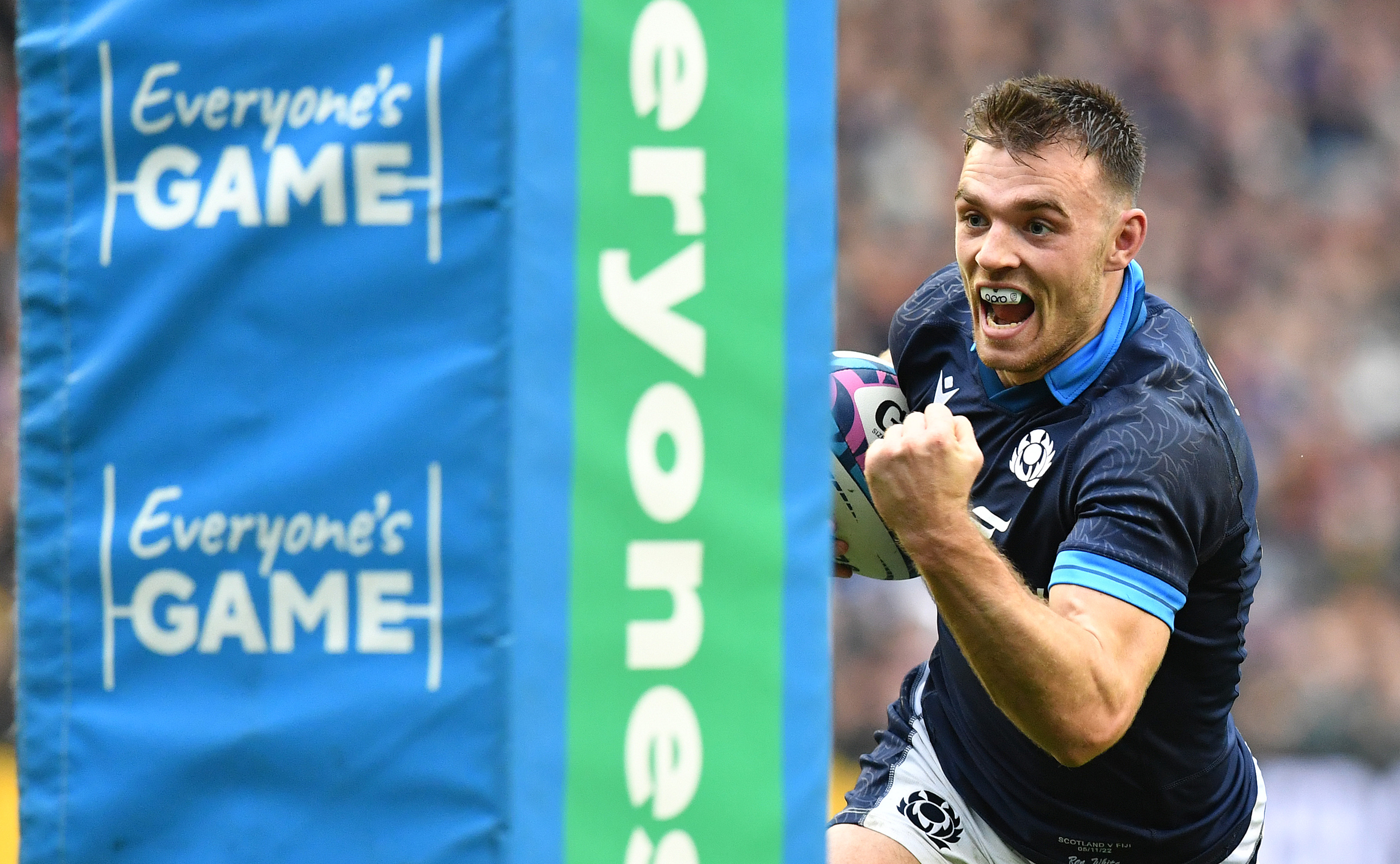 “I wouldn’t say there was regrets, but it just shows you on that level how small the margins are between wins and losses and how focused you have to be for 80 minutes,” White stated of the loss.

“You can make one mistake and not see the ball for five, 10 minutes and that leads to points - you have to stay accurate.

“That narrows it down to those key moments within in the game in being clear with your plan and the work you put in throughout the week, then when opportunities arise, you’re ready to take them as everyone is on the same page.

“That’s what we took from that New Zealand game, when we get the yellow card, they score and you feel the momentum switch, it’s just being calm in those moments and sticking to the systems set, rather than trying to force something and create even more pressure.

“It showed that we can compete with the very best for 60 minutes, now it’s just about doing it for the full 80 now.”

A fourth and final meeting against Michael Cheika’s Argentina was the final hurdle for Scotland to overcome in 2022.

The two proud nations renewed their rivalry on a brisk November evening in Edinburgh, following a 2-1 series loss for Scotland in South America with Exiles on both sides of the divide.

Juan Martín González and White were the elected representatives on this occasion, with another classic ensuing between the teams as Scotland wrapped up a 52-29 win. 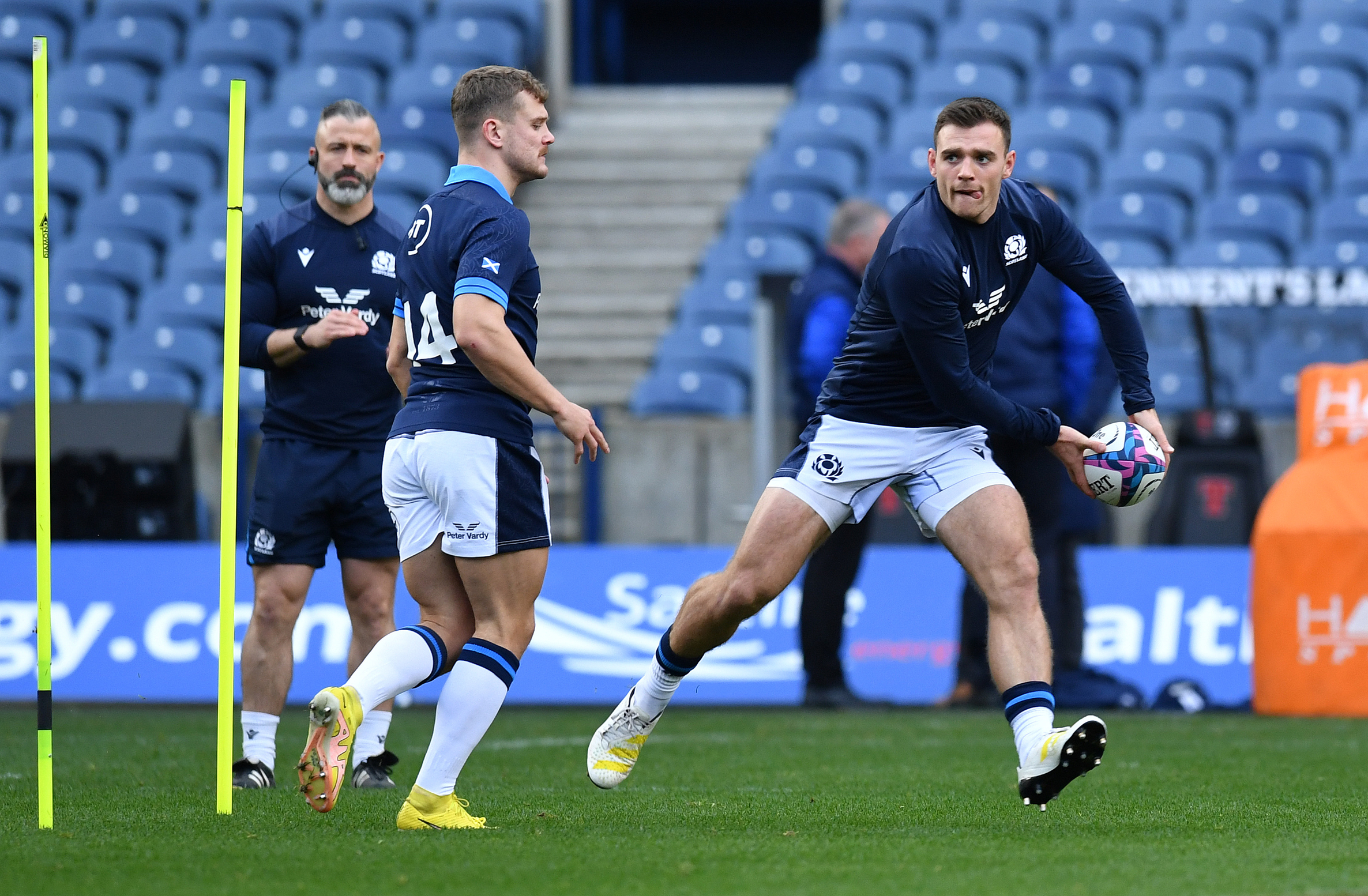 “I’ve played against him [Juan] a couple of times now and I loved my time in Argentina, I know quite a few of the lads having played with them here and at my old Club, they’re lovely people.

“Once you put them on the pitch they’re fierce and competitive people at the same time, the same as us really, and that is probably why it bubbled over at the end and I was trying to avoid half their team!

“They’re a very good team, when we play and back our game and utilise the players we have, then we have looked really good, but if we approach it as individuals, we can make mistakes and teams can get on top of us.

“To pull a good performance together for most of that game, they got a red card and we got a yellow card, there was lots of ups and downs and they even scored with 13 men.

“From the New Zealand game, just the conversations we had about the growth in the group we used to stay strong in those moments to win the game most importantly.

“It was important to get that win at home, just to finish on a high with a convincing victory and keep that momentum going from one year to the next and into the Six Nations.”

Looking ahead to another international period, just six ways away, perhaps one of the most open Guinness Six Nations campaigns awaits for White and Irish’s international contingent.

“You obviously don’t go out there to finish any less than first, we have a really good group in players coaches and staff, and on our day we have shown that we can beat anyone.

“Everything is pointing towards those big wins, it’s just about putting together consistent performances and trying to go further than we have before.

“Playing England in the first game is huge, and that can give us great momentum to go forward in the tournament.

“You’ve got to get picked first, if you worry about that then you miss your job now so the better I play here over the next few weeks the more chance I have, my next focus is to get back here and up the league, where we should be.”