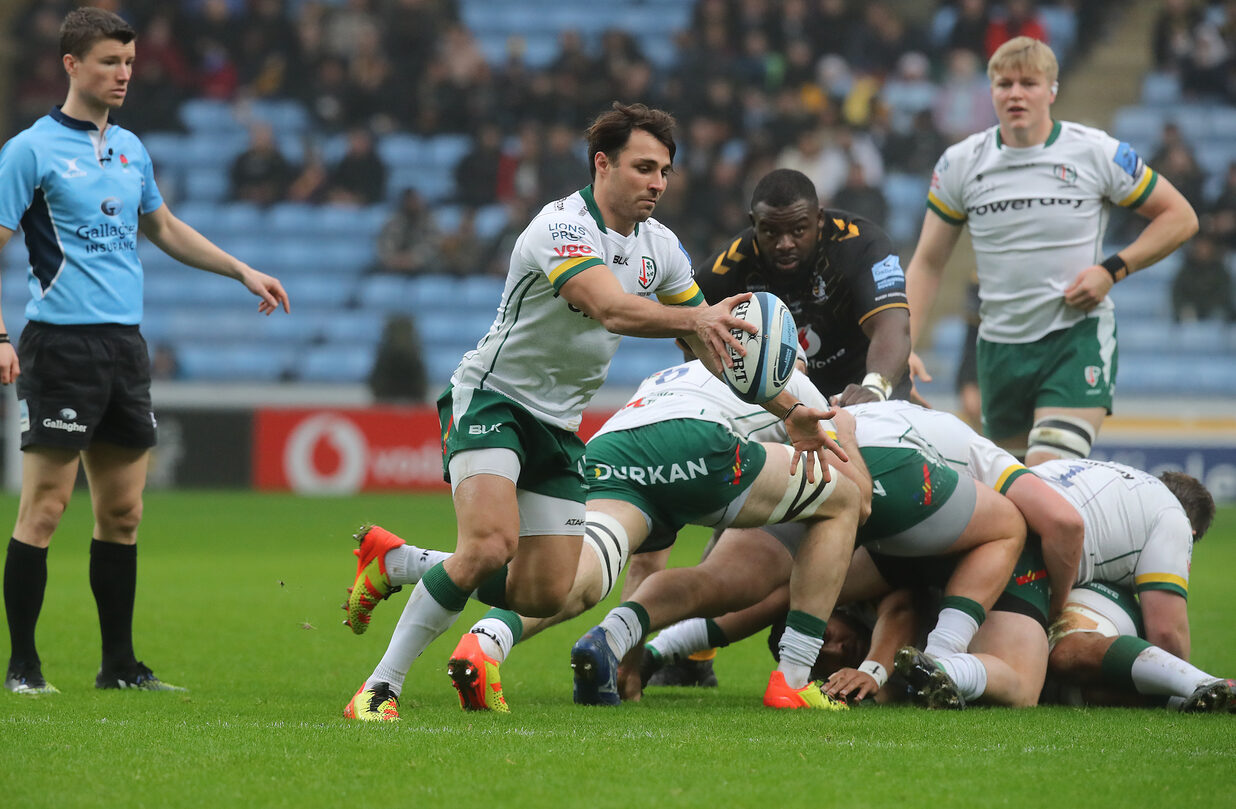 In a free-flowing, end-to-end affair, the hosts clinched victory, as Irish tasted defeat for the first time in two months.

In Irish’s final outing of 2021, they took an early fifth minute lead. After a series of phases in Wasps’ half, Declan Kidney’s side were awarded a penalty, which Paddy Jackson slotted over with ease.

Wasps wasted no time in responding though, when a break from inside their own half resulted in Ali Crossdale sliding his way over for a well-worked counter-attacking try.

Jimmy Gopperth added the extras from out wide, to extend the hosts’ lead to 7-3.

Irish were forced into an early change straight after that score, with Tom Parton limping off, to be replaced by Lucio Cinti.

The Exiles were soon back on the front foot though, with only a last-gasp tackle denying Cinti a certain try, moments after he entered the fray.

But it was Wasps who got the next points on the board, when Dan Frost made the most of a fortunate ricochet to dot the ball down. Gopperth added two more.

Undeterred, Irish were soon back in the Wasps final third, and – following fine play from Kyle Rowe, now playing at full-back – Ollie Hassell-Collins left a handful of home defenders trailing in his wake to finish with a flourish.

That proved to be Rowe’s final involvement though, as he hobbled off to be replaced by Matt Williams, with Cinti reverting to full-back.

Wasps were a threat every time they surged forward and they seemed destined to score another try on 25 minutes, only for a combination of Nick Phipps and Curtis Rona to thwart Francois Hougaard with the line at his mercy.

The referee went back for an earlier infringement though, and Gopperth made it 17-8 with a simple penalty from bang in front of the posts.

The hosts’ third try of the afternoon did eventually arrive ten minutes before the break, however – Alfie Barbeary crashing his way over.

It was raining tries by now – with Irish responding almost immediately. Tom Pearson broke from midfield and when the ball was spun out wide, it was that man Agustin Creevy who smashed over out wide for his eight try of a quite remarkable season.

Gopperth added three more points on 37 minutes, but – with the clock in the red – the final score of the half would go to the visitors, and guess who?

After a brilliant shove, involving almost the entire Irish team, Creevy – who else – was at it again, forcing his way over for his ninth try of the campaign!

That concluded an incredible half of rugby, as Wasps headed into the break 25-18 ahead.

Irish were on the front foot from the first whistle in the second half, but – having spurned a couple of good opportunities deep in the hosts half – they were made to pay on 46 minutes, when Frost crashed over for his second of the afternoon. Gopperth kicked the conversion, to make it 32-18 to the home side.

Gopperth squandered an easy penalty just before the hour, but Irish still had it all to do with the clock ticking down, trailing by 14 points.

With the rain sleeting down, the game became scrappy – but Wasps didn’t care a jot when Gopperth kicked a penalty, extending their advantage to 17.

Irish – as they always do – kept going; Tadgh McElroy reducing the arrears with a try on his debut, to make it 35-23 with a quarter of an hour to play.

Wasps scored next, another Gopperth penalty extending the lead to over two scores.

The hosts ended the game with 14-men, when Jacob Umaga was given his marching orders for a high shot on Hassell-Collins – and Irish scored soon after, with Ben White sliding over, with Jackson adding the extras.

That proved to be the final score of the afternoon, as Irish tasted defeat for the first time since October 30th.