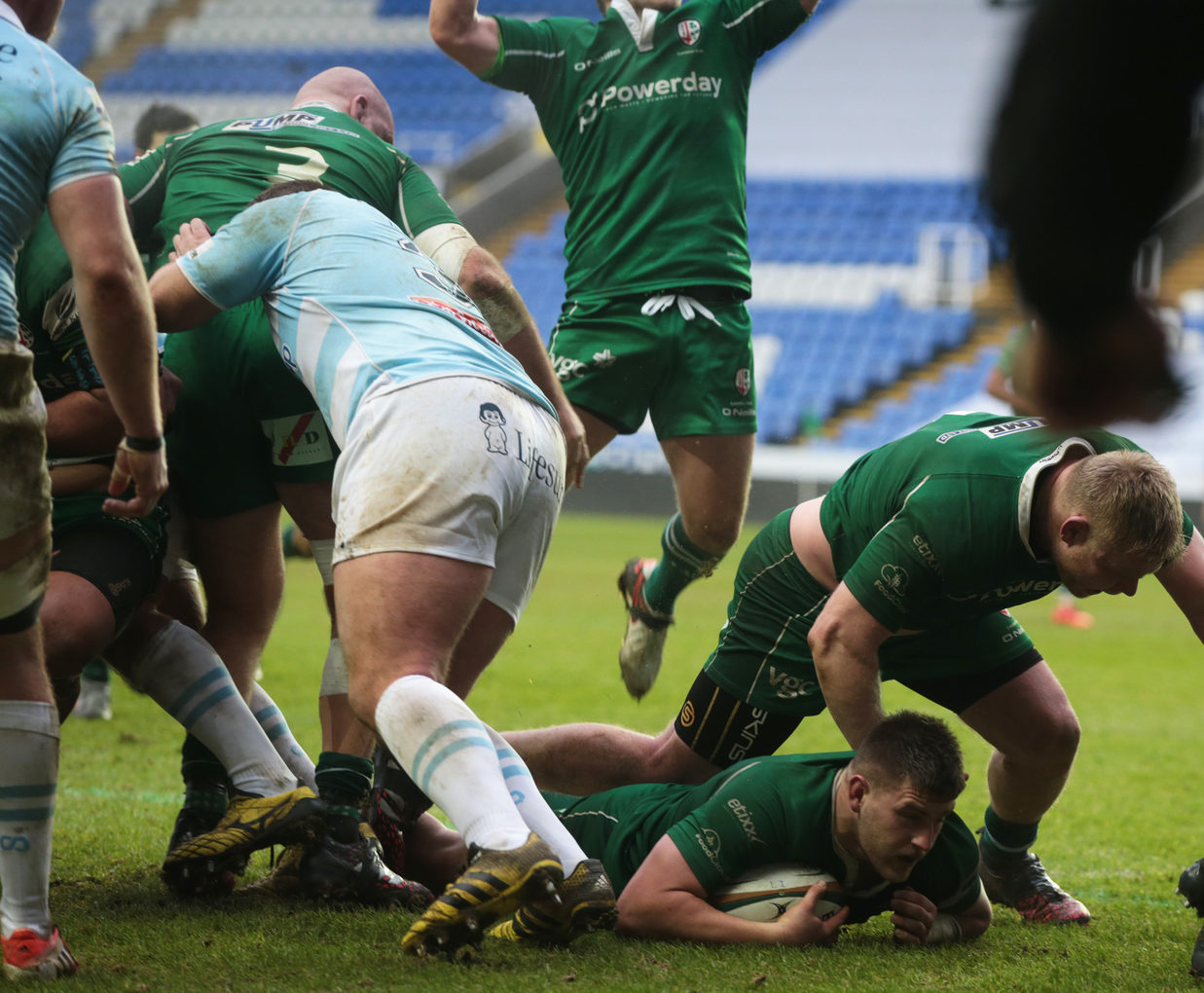 London Irish moved 12 points clear of Yorkshire Carnegie at the summit of the Greene King IPA Championship table with a 36-21 bonus-point victory over Bedford Blues at the Madejski Stadium.

The reverse encounter back in September yielded seven tries at Goldington Road, and this New Year’s Eve clash lived up to its billing in front of a 4,000 strong crowd.

Desite the Sky Bet Championship fixture between Reading and Fulham being postponed 10 minutes into the second half due to fog the previous night, the setting was perfect for free-flowing rugby on a fine autumnal afternoon.

The visitors were first to get off the mark, Matt Gallagher racing clear on the far side to touchdown to give his side the early advantage. Jake Sharp made amends for his earlier penalty miss by slotting home the touchline conversion to make it 7-0.

Irish responded to the early set-back in positive fashion with a series of attacks testing Bedford’s defensive resolve, which was resolute until the 18th minute when Ofisa Treviranus crashed over the line. The giant Samoan scooped the ball up from the base of the scrum, before fending off three would-be tacklers to dot down. Bell slotted home the conversion to restore parity at 7-7.

Just short of the half hour mark Sharp had the chance to edge his side back in front with a penalty, but he could only shank his effort wide of the near post. Sharp was almost made to pay immediately from the restart, Topsy Ojo’s try chalked off for a forward pass in the build-up. However, on the stroke of half-time Irish were rewarded for their endeavour up front courtesy of hooker Dave Porecki, who added the final touches to an aggressive maul.

14-7 up at the break, Irish repeated the trick six minutes into the second period by virtue of a penalty try as Irish again demonstrated their supremacy with a driving lineout. Bell added the extras to extend their lead to 21-7.

On 52 minutes James Marshall was yellow-carded for an innocuous infringement off the ball, and Bedford made the extra man count a minute before his return to the field. Tom Whitely coasted in on the overlap to the delight of the Blues’ travelling contingent. Sharp’s conversion closed the gap to 21-14.

Irish gave themselves some breathing space 15 minutes from time, Bell adding further gloss to his points tally for the season with another penalty prior to securing the try bonus-point.

The bonus-point came in the shape of Treviranus, the Pacific Islander bagging his brace for the day to end 2016 in style and extend his side’s lead to 29-14.

Bedford refused to lie down in the dying embers of the contest with Michael LeBourgeois crossing in the last minute, but it was Irish who had the last say thanks to replacement second-row Jerry Sexton who flopped over under a heap of bodies. Bell kicked the extras to end the game 36-21 to Irish ahead of the return of the British and Irish Cup.