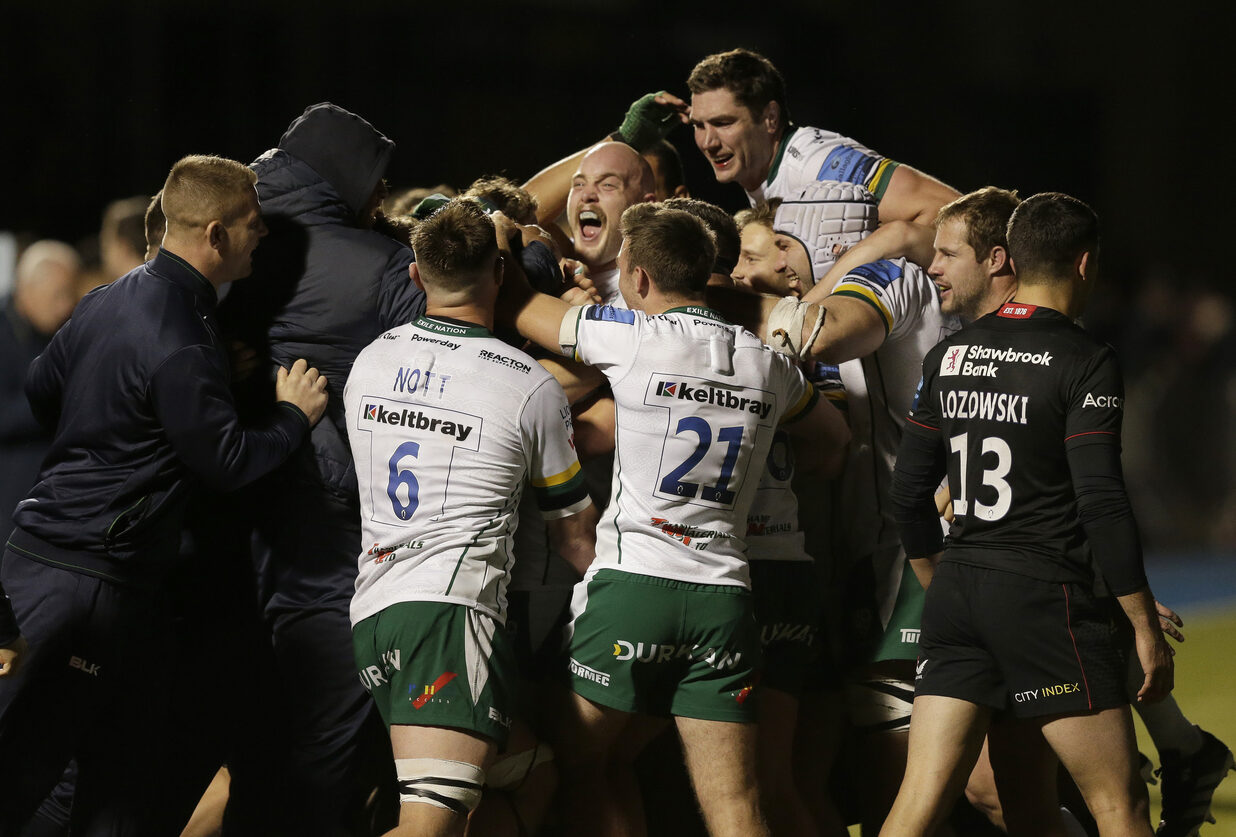 London Irish staged the mother of all comebacks to clinch a sensational draw at the Stone X Stadium on Saturday afternoon!

With the clock in the red, Kyle Rowe’s hat-trick try, followed by a Rory Jennings conversion, drew the scores level, as Irish – despite being reduced to 14 men inside the opening 20 minutes and at one stage being 26 points down – fought back to ensure honours ended even in a Gallagher Premiership classic!

On a grey afternoon at the Stone X Stadium, Saracens took an early lead.

From a line-out deep in Irish territory, Tom Woolstencroft was in the right place at the right time to go over from a rolling maul, to hand the hosts a fifth minute advantage.

Irish slowly played their way back into it as the clock approached the quarter hour mark – and after Sarries were penalised for back-chatting twice to the referee following a penalty award, Jackson’s 30-metre penalty sailed through the uprights to make it 5-3.

Saracens increased their lead back to five points midway through the half, however, when Alex Lozowski kicked his first penalty of the afternoon from in front of the posts.

Irish’s hopes were dealt a big blow two minutes later when Adam Coleman was shown a straight red card for a high challenge, leaving the visitors to play out the final 60+ minutes with 14 men.

Bad turned to worse soon after, as Jackson was forced from the fray with what looked to be an arm injury, with Rory Jennings coming on in his place.

The visitors were made to pay again on the half hour mark, when Rotimi Segun danced his way through to dot down, to make it 13-3.

To their credit, Irish responded with arguably their best passage of play so far, but the try they were seeking unfortunately didn’t arrive, with Nick Phipps’ effort ruled out for crossing.

The visitors were by no means second best despite their numerical disadvantage, asking a few late questions in the half, but it was Sarries who went in with their tails up, leading 13-3 at the break.

The second half started at a frenetic pace, with Saracens – a man to the good – posing a constant threat in attack.

The score they were threatening arrived in the 45th minute – Segun crossing for his second try from a well-worked backs move, with Lozowski adding the extras.

The hosts were in full flow now and three minutes later Ben Earl spotted a gap in the Irish defence to coast through unopposed. Lozowski kicked two more with the boot.

Declan Kidney’s side kept going though and on 54 minutes, after a sustained period of possession in the Sarries 22, Kyle Rowe bundled his way over for his second try in as many outings.

Saracens were back in scoring form just after the hour, Billy Vunipola crossing the line with a combative run and finish.

But the best try of the game went the way of the visitors two minutes later – and it was that man Rowe yet again!

The winger, with it all to do in midfield, jinked his way in and out, leaving a handful of Sarries defenders trailing in his wake to score a quite stunning solo try!

Even the Saracens faithful applauded the score – and Rory Jennings added the two from in front of the posts, to make it 34-15.

Remarkably, the 14 men scored again soon after, a third try of the afternoon, this time courtesy of Phipps!

It was a crazy game – and Irish, amazingly, added a fourth try seven minutes later.

Despite being a man down since the 19th minute, Kidney’s men crossed for a bonus-point score, when Matt Rogerson bustled his way over, to set up a grandstand finish!

It was tense – and it got even more tense when, with the clock in the red, Rowe went over for his hat-trick try!

That left it all down to Jennings to kick Irish level from close to touch – and that he did, to seal a quite remarkable share of the spoils.