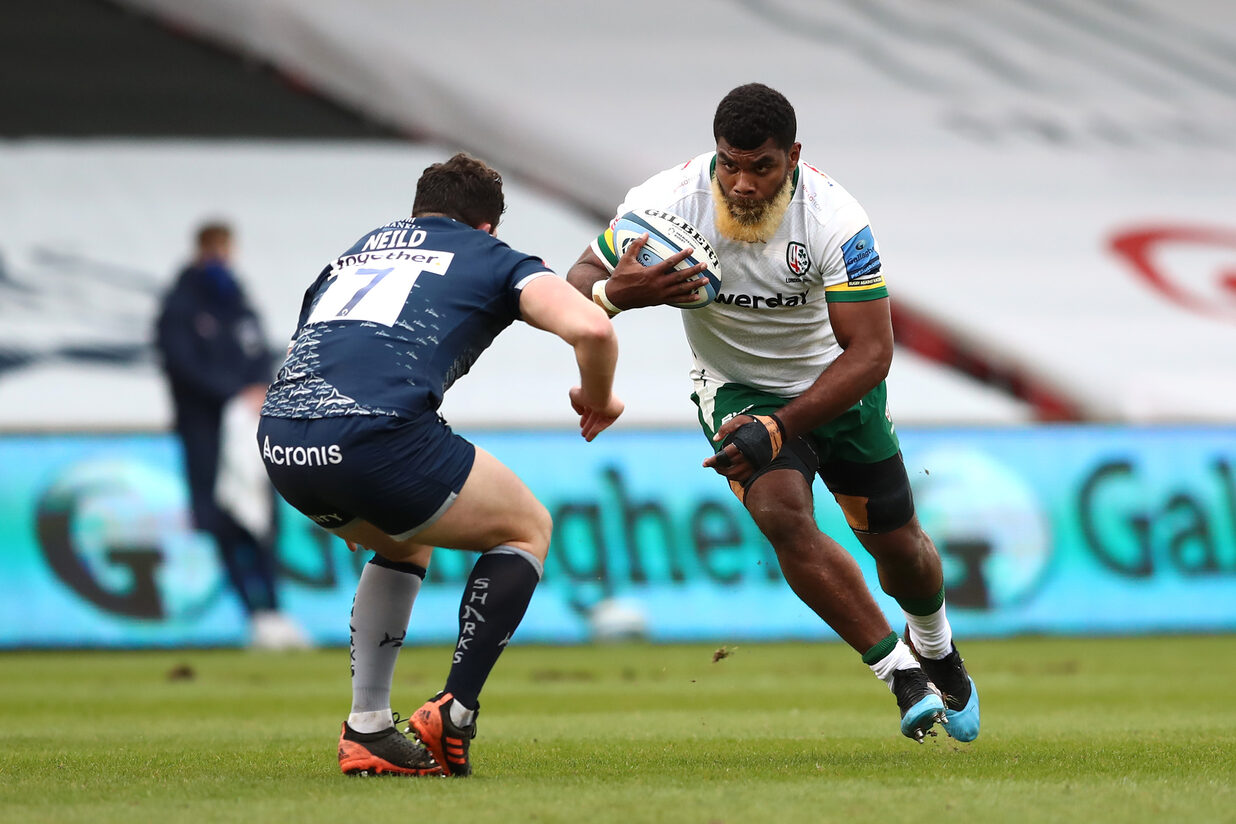 London Irish fell to a heavy defeat at the AJ Bell Stadium, going down 41-13 to Sale Sharks.

On a disappointing afternoon for the Exiles, Declan Kidney’s side were second-best for the majority of the Round 14 clash – and they were made to pay by their prolific hosts.

The Sharks set the tempo early on, spending the opening five minutes camped deep inside the Irish 22.

During that period, Irish were reduced to 14 men, when Theo Brophy Clews was sent to the bin for tackling his man without the ball.

From the next phase of possession, Sale scored the first points of the contest – Simon Hammersley darting over from close range following a swift backs move, with Robert du Preez adding the extras.

Despite their numerical disadvantage, Irish responded positively to that early setback and they were rewarded with a penalty five minutes later, which Paddy Jackson kicked to make it 7-3.

The visitors were immediately on the back foot though from the resultant kick-off, with Albert Tuisue knocking on. It looked likely to prove costly moments later, only for the TMO to intervene and rule out Byron McGuigan’s effort for a knock-on, much to the visitors’ relief.

Knock-on’s were all too frequent for both sides early on, with errors in midfield disrupting the flow of the contest.

The TMO had its say again midway through the half, this time denying Lood de Jager after he charged down Ben Meehan’s kick – with a knock-on again the verdict.

Irish were living dangerously – and they survived another scare on 26 minutes, when de Preez missed a routine penalty.

After those two earlier let-off’s, Irish were eventually made to pay just after the half hour mark, de Jager crashing over from a rolling maul. De Preez’s conversion hit the upright.

It went from bad to worse for the Exiles five minutes before the break – McGuigan capitalising on a deft kick over the top and beating three Irish defenders to the loose ball to touch down. De Preez made no mistake with the boot this time.

Remarkably, there was still time for a third TMO intervention on the stroke of half-time, when a forward pass in an earlier phase of a move denied Jean-Luc du Preez a score.

Irish trailed 19-3 at the break – and if truth be told, it could’ve been a lot worse than that.

19-3 became 19-6 inside the opening 60 seconds of the second half – Jackson kicking a penalty after good work in midfield from Curtis Rona forced a Sharks error.

A minute later, Coenie Oosthuizen was sent to the bin for a no arms tackle, gifting Irish the numerical advantage for the next ten minutes.

Buoyed by that, Irish briefly started to ask questions of the Sale backline, but they were their own worst enemies on 48 minutes, gifting the Sharks a score when Arron Reed latched onto a loose ball to dart over unopposed.

Irish were enjoying their best spell of the match around the hour mark, yet despite enjoying plenty of the ball, chances remained at a premium.

Sale, however, were making the most of their opportunities, and McGuigan added his second try of the afternoon on 65 minutes, picking off a loose pass in midfield to score.

Undeterred, Irish kept going – as they always do – and after a nice offload from replacement Blair Cowan, Ben Donnell touched down, with Jackson converting.

Sale would have the next say though, AJ McGinty kicking a penalty six minutes from time.

Two late yellow cards for the hosts ensured Irish would play out the final few minutes against 13 men – but on a day to forget for the visitors, it was Sale who would score the final points of the contest, McGuigan crossing for his hat-trick, to leave Irish heading back to London disappointed.