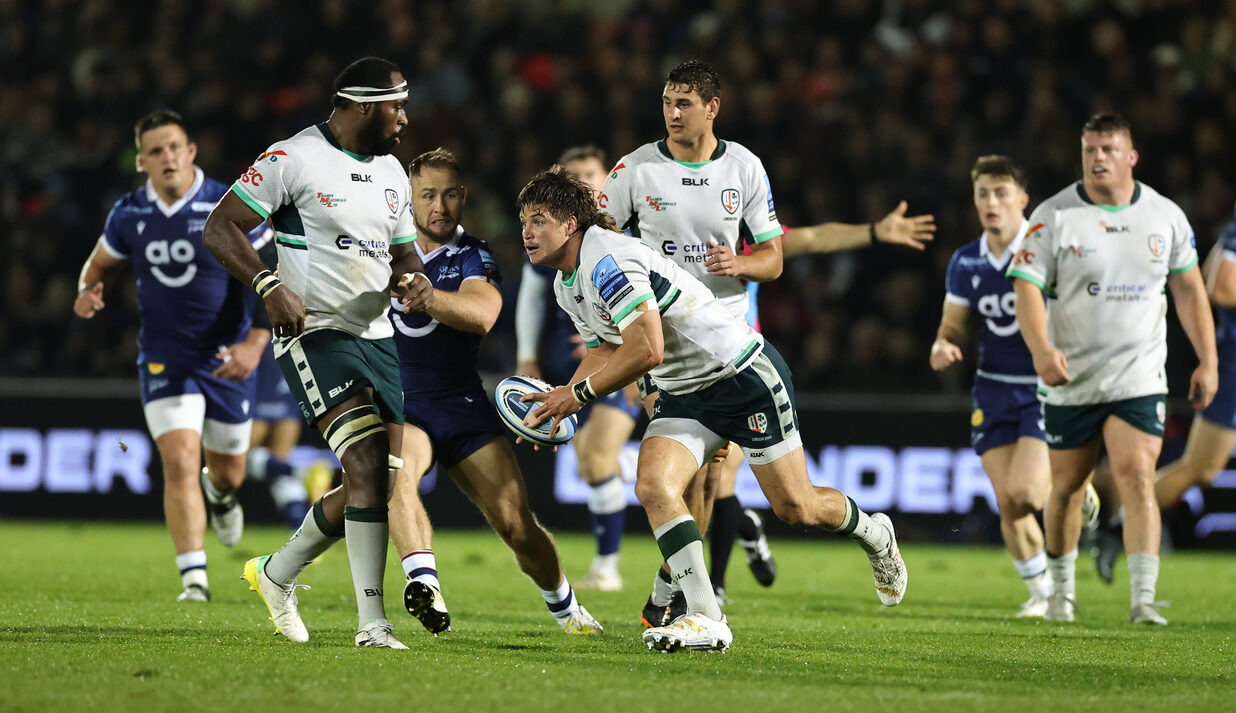 London Irish was unable to accrue points at the AJ Bell Stadium in Round 6 of the Gallagher Premiership, Sale Sharks taking a 37-14 victory.

Dan du Preez and Joe Carpenter touched down for Alex Sanderson’s men in the first half, Ollie Hassell-Collins seizing a late moment of opportunity to take Irish into the break with points on the board.

Tom Roebuck took the first of his two efforts in the second stanza not long after resumption, but an ever-determined Benhard van Rensburg dotted down for a deserved effort on 50 minutes.

Roebuck doubled his tally on the evening before Ewan Ashman wrapped up the result after re-joining the action following Akker van der Merwe’s injury.

Sale put much of the early pressure on Irish with ball in hand in the opening five minutes, but a rip at the breakdown from the ever-industrious Benhard van Rensburg took the defensive focus off the Exiles for the time being.

Sharks did continue with their attacking intent, but carelessness at the set-piece and breakdown, with offences at a rolling maul and then a scrum, unable to progress the home side to the whitewash.

Another attempted rolling maul saw Alex Sanderson’s side over the try line on this occasion, as number eight Dan du Preez dotted down 12 minutes in with Rob du Preez slotting the extras from the boot.

Van Rensburg’s forcing of a Sale spill in contact won Irish a scrum, and the travelling pack then earned a penalty at the set-piece to gain Irish’s first adventure into the opposing 22 with a Paddy Jackson touch finder.

Possession was spread out left, smart handed offloads from Ben Loader and Will Joseph a particular highlight, but following a lineout Irish were well met once again by their hosts and were penalised for entering the breakdown off their feet.

After being held up over the line on a blindside offensive, Sharks only had to wait minutes later to add to their tally after an Irish scrum penalty through a du Preez place kick.

The Mancunian outfit increased their advantage through Joe Carpenter before the half’s conclusion, the full-back sliding in from the left channel to score.

However, an unclaimed restart from Sharks, not for the first time in the first period, would offer Irish an avenue back into the Round 6 affair.

Ollie Hassell-Collins retrieved the ball in behind the backline following a botched catch from the opponents and manage a clever finish in the goal area under defensive constraint, Jackson’s conversion cutting the deficit to 8 as the teams headed into the sheds.

Sale Sharks wasted little time in trying to restore parity and did so via Tom Roebuck, tracking a speculative box kick from Raffi Quirke and fielding the ball after a favourable bounce near the try line to score.

So’otala Fa’aso’o’s work in midfield over the ball following broke play gained Irish the ball, and with a terrific kick to touch from Jackson, Irish gained a foothold territorially as the league’s most effective lineout pre-Round 6 got to work.

Whilst the maul off the set-piece broke down, van Rensburg was on hand to dive over the try line after picking up the ball from the remnants of the surge, Jackson adding yet another impressive touchline conversion.

Sharks grabbed their try bonus point off the back of good handling and quick thinking the penetrate through Irish’s defence, Tom Roebuck taking a brace from the game and du Preez adding two more.

League top scorer du Preez notched three more on the night from a centralised effort after a high tackle from the Exiles, who soon made way for Tom Curtis.

Irish’s dogged determination when going forward in moments late on subsided with a conclusive fifth effort from Sharks, Ewan Ashman scoring off the back of a rolling maul and Curtis missing with his first effort off the tee as Sharks wrapped up the 37-14 result.