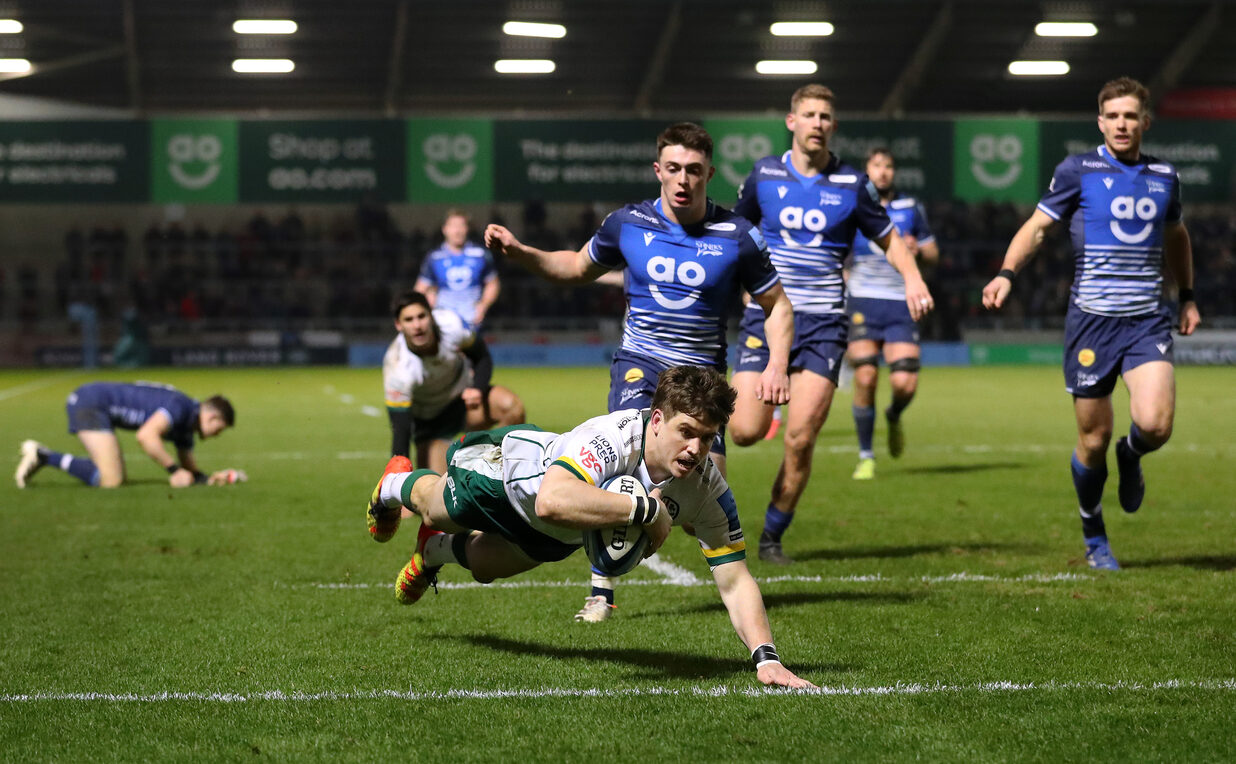 London Irish battled out a 27-27 draw against Sale Sharks, despite being down to 14 men for 20 minutes of the contest.

The Round 18 contest was another Friday night trip for the Exiles, this time to the AJ Bell Stadium to take on Sale Sharks.

On eight minutes, Sale had a potential try checked by the TMO. Lood de Jager crashed his way over the Irish tryline but, after a brief stoppage from the officials, was judged to have knocked the ball on.

The first 20 minutes, apart from a neat grubber kick from James Stokes that was almost gathered by Ollie Hassell-Collins, didn’t offer much in terms of attacking prowess.

The following period until the half hour mark saw Irish camped in the Sale Sharks’ half, but they couldn’t dent the scoreboard.

Just when the game needed a spark, Lucio Cinti ripped through the Sale defensive line to provide it. The Argentina winger sprinted up to the hosts’ 5 metre line before offloading to Terrence Hepetema who slammed over for the opening try of the match. Paddy Jackson added the conversion and Irish took a 0-7 lead.

With only a few minutes to go in the first half, James Stokes was shown a yellow card with Sale pressuring the Exiles’ tryline.

Taking full advantage of the extra man, Sale went over for their first try of the match through Dan du Preez, with the number 8 touching down after a strong rolling maul. The conversion was missed, so it looked like Irish would take a slender lead into the break.

However, with the clock in the red, AJ McGinty slotted a penalty attempt to nudge his side into an 8-7 lead at half-time.

Irish, despite being down a man, came out of the blocks quickly and put pressure on the Sale defensive line. This resulted in a penalty and Jackson was good from the tee to edge Irish back in front.

The lead only lasted two minutes, with the hosts hitting back thanks to a try from Jean-Luc du Preez. The lock drove himself over the line and, after McGinty added the extras, they led 15-10.

James Stokes was next to get on the scoresheet. The fullback with a strong fend to get himself over the line and level the scores at 15-15. The conversion was missed but the game was left in the balance with just under 30 minutes to go.

Olly Cracknell was then shown a yellow card for a late tackle, and Irish were once again down to 14 men.

Again, Sale made then made the extra man count. Dan du Preez went over from close range to put his side back in the lead and McGinty pushed the score to 22-15.

Irish, to their credit, didn’t let this deter them. A spill from Sale in their own 22m allowed for Benhard van Rensburg to hack through. The centre then chased down his own kick to slide over. Jackson added the conversion, and the game was level once again, 22-22.

The match had sparked into life in emphatic fashion!

Aaron Reed was the next to cross the whitewash, coming from the kick-off following the latest Irish score. The winger sprinted over in the corner to put Sale ahead, yet again.

Juan Martin Gonzalez then looked to have scored in the corner, but a good last-ditch tackle from Sale put the flanker into touch.

Just five minutes left on the clock, step up captain Nick Phipps. The scrum-half darted from the base of a rolling maul and found his way over the line. The conversion was missed, and the game was all square with three minutes to go.

80 minutes were up, and Irish were awarded a penalty on halfway. Jackson stepped up to win it at the death, but his long-range kick was wide, and the match ended 27-27. This was Irish’s fourth draw of the season, with the Exiles picking up three points for their efforts.