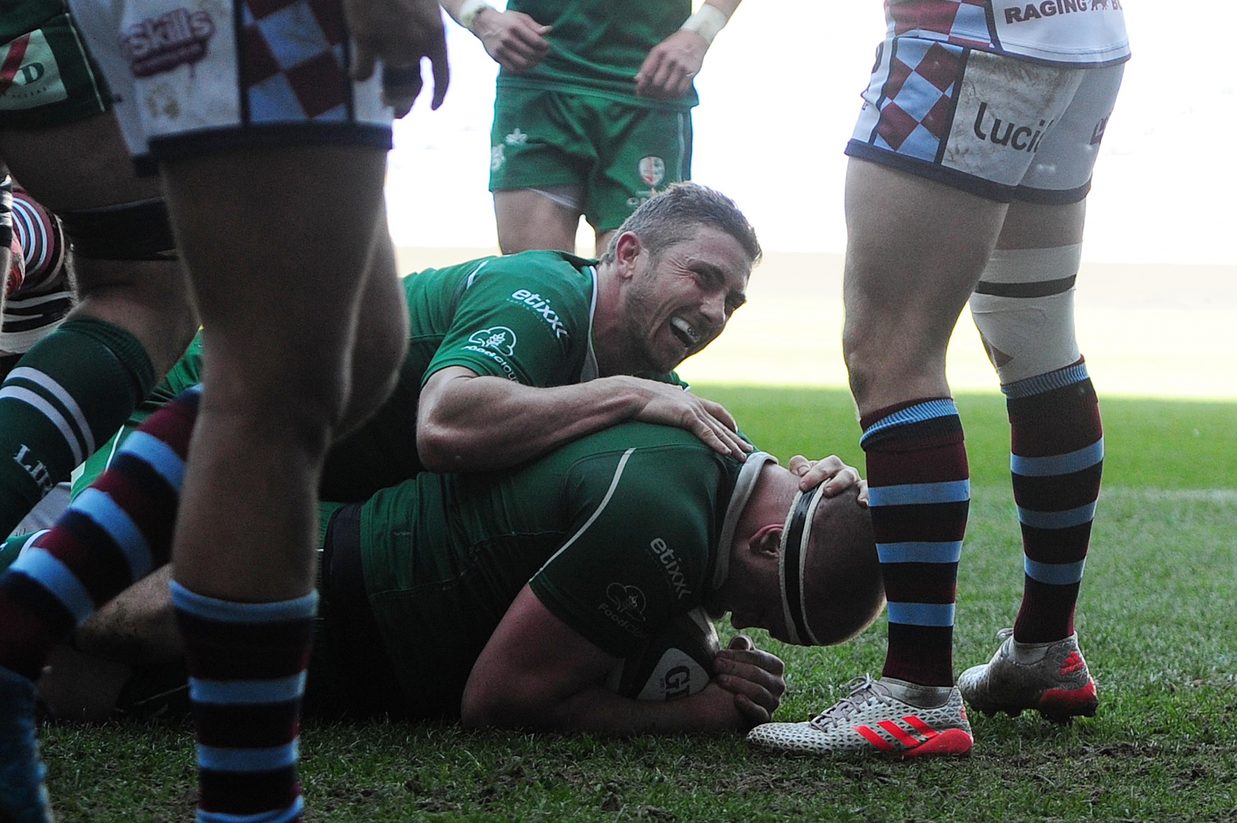 London Irish got back to winning ways with a comprehensive 82-3 bonus point victory over Rotherham Titans in the Greene King IPA Championship.

Play-offs looming large, the win was just the tonic for Exiles Director of Rugby Nick Kennedy, who now prepares his charges for the Easter weekend trip to Doncaster Knights.

12 tries in all, including a hat-trick from Alex Lewington, swept aside the Titans to give everyone associated with Irish a shot in the arm as the campaign intensifies.

After Caolan Ryan’s third minute penalty put the visitors in front, Irish hit back immediately through Lewington, who latched onto Greig Tonks’ neat dab into the corner to score. Theo Brophy Clews converted from the touchline to put the Exiles 7-3 ahead.

Kennedy’s men doubled their tally on 14 minutes when Fijian international Aseli Tikoirotuma escaped the attention of two Titans defenders, before scooting in for the try. Tonks took over the kicking duties to slot home from an acute angle to give Irish the advantage at 14-3.

With Rotherham conceding a flurry of penalties in quick succession, Irish cranked up the pressure by electing to kick into the corner in favour of a shot at goal. Turning the screw on their South Yorkshire counterparts, the Exiles got their reward when Blair Cowan burrowed over from a driving lineout on 28 minutes. Tonks’ conversion extended the hosts’ lead to 21-3 with the bonus point very much within their grasp.

Lewington grabbed his brace and secured the bonus point for Irish on the stroke of half-time, dotting down in style following a swift backline move involving Brophy Clews. Cowan and Ofisa Treviranus were the catalysts for the score, the latter puncturing a hole in Rotherham’s defensive line to get Irish within inches of the try line. Tonks’ conversion, his third of the afternoon, took him over 100 points for Irish and increased the deficit to 28-3.

Irish picked up from where they left off before the break, with scrum-half Brendan McKibbin celebrating his new contract by touching down under the posts. McKibbin, one of nine players to commit his future to the Exiles this week, took an inside pass from Brophy Clews to coast in under the posts.

Running riot at the Madejski, former Western Force hit-man Ollie Hoskins crashed over to notch up try number six on 50 minutes. Cutting edge in abundance, Irish were revelling in the searing Berkshire heat with outstanding attack play. Tonks’ simple conversion made it 42-3 with half an hour still to play.

On the hour mark Cowan notched up his second try of the afternoon, a dominant rolling maul enabling the Scotland flanker to touch down. The radar boot of Tonks made it 49-3.

Irish surpassed the 50-point mark with just over 15 minutes remaining when McKibbin peeled off the back of a driving lineout to touchdown for his second try.

There was no let-up in Irish’s relentless attacking display and further scores from man-of-the-match Tikoirotuma, Brophy Clews and the returning Tommy Bell during a six minute blitz, pushed home their advantage as they surpassed 70 points.

Lewington put the icing firmly on the cake by grabbing his hat-trick with the last play of the game, with Tonks’ touchline conversion ending the game 82-3.