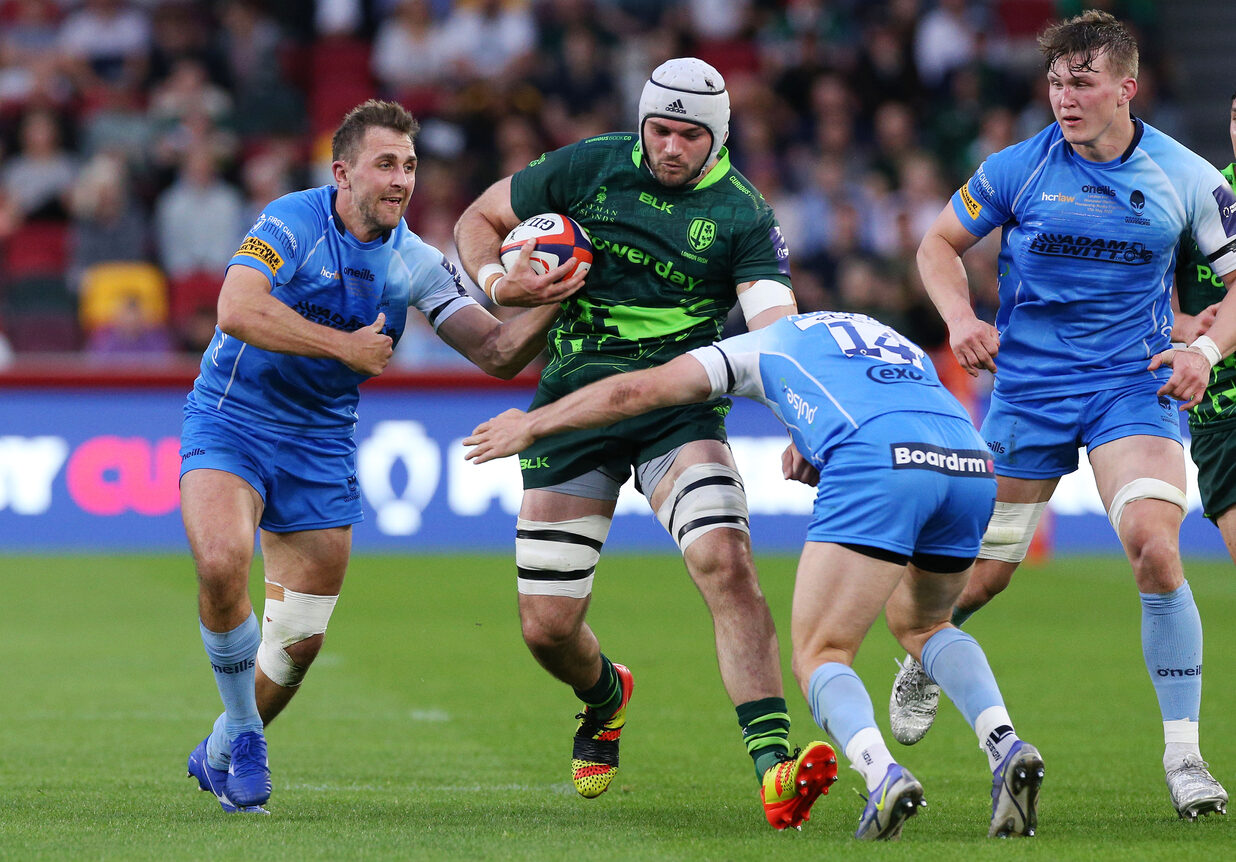 London Irish’s odyssey to cup glory concluded in defeat this evening in an extra-time loss to Worcester Warriors at the Brentford Community Stadium, finishing up 25-25 in the Premiership Rugby Cup final.

Warriors’ better try record of three to Irish’s one on the night proved the decisive element in Steve Diamond’s side bringing silverware back to Sixways, and they opened the scoring through Matt Kvesic.

Paddy Jackson’s penalty kicks had Irish ahead by seven points but an even later Kyle Hatherell try levelled the match, and with no points scored in extra-time, Worcester emerged victorious.

Warriors made an ill-disciplined start, Fin Smith putting the kick-off into touch whilst his side were found not rolling away, offside and then off their feet at consistent breakdowns with Paddy Jackson’s boot punishing the visitors with the first three points of the game.

Irish were deemed offside and Fin Smith seized his opportunity from the tee moments later, but good work at the breakdown from Albert Tuisue halted any further progression as Warriors could not release the ball.

Worcester took the first try of the game through Matt Kvesic, picking up from the base of the ruck to penetrate centrally through the Exiles rearguard and touch down under the posts, Smith adding the extras.

Strong counter-rucking from Warriors coerced Irish into an offside penalty and Smith was on hand to add to the Irish deficit, bisecting the posts from beyond the Irish 10-metre line.

Irish were a determined side and reaped the reward of their attacking endeavour as Worcester were penalised at the ruck and Declan Kidney’s men were back within a converted score with Jackson’s second penalty.

A lineout steal from Juan Martín González and a dropped collection of a box-kick from Perry Humphreys awarded Irish valuable possession, from the following phase after the scrum Irish were over!

A cut inside from the edge from Lucio Cinti positioned the Exiles well, and scrum-half Ben White saw a snipe of his own to sneak inside unchallenged to dot down under the posts- Jackson adding the extras, and a tense game was brought level.

The wind was in the Irish sails, Arundell attempting another trademark chip-and-chase that was collected by Will Joseph, the East Midlanders were in at the side at the next ruck and Jackson lined up another placed kick to convert and take Irish into the lead for the first time.

Worcester did regain the advantage with the clock in the red, Humphreys redeeming an earlier spillage with a finish in the corner but a good charge from Irish backs meant the lead was only two at the break.

The visitors almost extended arrears after half-time for Irish through their captain Ted Hill, collecting a loose ball and racing from halfway but a knock-on from Francois Venter in earlier proceedings brought back play and bought Irish some relief.

Steve Diamond’s outfit were consistently penalised at the following scrum and Paddy Jackson did not hesitate in swinging momentum back in the favour of Irish from a penalty kick.

A Warriors breakaway struck fear into the BCS crowd, particularly with Duhan van der Merwe bearing down on the try line, and the Scotsamn’s offload took a touch of an Irish player to situate Warriors well.

Van Rensburg’s ability to get over the ball stifled the Warriors attack after the ball was moved wide, and Tuisue’s capabilities do to the same handed Irish another chance at three points further up the park which Jackson took.

Jackson was penalised for a deliberate knock-on in contact, and Smith’s touch finder put Warriors into the Irish 22- Steve Mafi, nonetheless, had different ideas with a steal of the set-piece but the Exiles couldn’t hold on to possession.

A faulty scrum undone the Warriors yet again, the impact of replacements Ciaran Parker and Will Goodrick-Clarke saw them continue the work of their predecessors and allowed for Jackson to further the lead and make it a swing of a converted score.

Replacement Ben Donnell pilfered the ball to turnover possession for Irish, and Warriors were then marched back, not for the first time, to give Jackson another ten metres to benefit from, but the Irishman couldn’t convert.

Replacement Ben Loader was penalised for deliberately kicking the ball away but there was nothing doing at the lineout for Warriors.

Irish were tasked with defending bravely, Loader taking a loose ball into touch from a Smith kick from hand to prevent Ollie Lawrence from scoring.

Worcester repeatedly went for touch, again and again, and they eventually breached the whitewash through Kyle Hatherell’s converted try- the Premiership Rugby Cup final was going into extra-time.

Irish conceded a scrum penalty after a Worcester knock-on at the restart but couldn’t sustain a consistent set-piece and Smith had another shot at goal for the first points of extra-time, which he didn’t convert.

A strong Exiles scrum reversed possession and the attacking impetus laid with the Boys in Green- a deliberate knock-on from van der Merwe was the third of a string of penalties conceded by Worcester and Jackson opted for an earlier infringement to take his spot kick, but it was another missed penalty and honours remained even.

A knock-on from Ciaran Parker was quickly undone by the work done by himself and the pack at the scrum, earning another penalty that agonisingly sailed adrift of the uprights- the first points of overtime remained elusive for both sides.

Another scrum penalty, this now the Warriors sixth, presented another penalty kick for Jackson that couldn’t be grasped- but crucially, Warriors led on tries scored with three to one and scores staying the same would confirm Worcester champions.

A third turnover ball of the final from van Rensburg won back Irish with two minutes remaining and Jackson opted for touch with the Worcester penalty conceded near halfway.

A Hatherell knock-on meant Irish had a put-in with the clock in the red but the boys in blue dominated when it mattered, winning the ball back to find touch to win the Premiership Rugby Cup final.