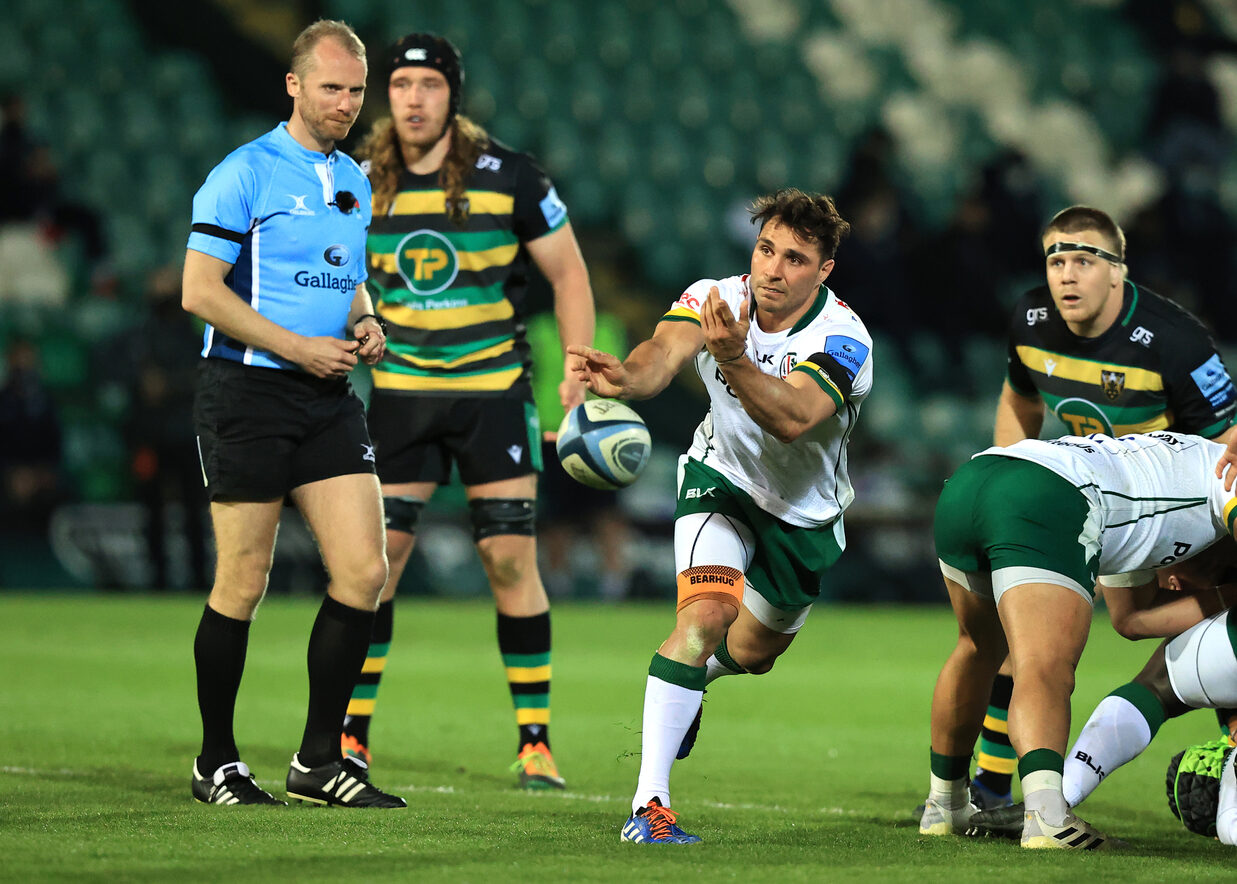 London Irish fell to a try bonus-point defeat to Northampton Saints in Round 16 of the Gallagher Premiership, going down 44-26 at Franklin’s Gardens.

On a fresh Spring night in Northampton, the opening exchanges were typically hard-fought.

Albert Tuisue was the first Irish player to stamp his authority on the contest, stealing the ball inside his own 22, before galloping well over halfway to put the Exiles on the front foot.

That attack came to nothing, but at the end of a nip-and-tuck opening ten minutes, the visitors took the lead.

Following phase after phase of Irish possession, Nick Phipps found a gap in the Saints 22 and broke through a couple of tackles before crashing over for the opening score.

Paddy Jackson kicked the extras to hand the visitors a dream start.

The lead lasted just over a minute though, Fraser Dingwall making the most of some space in midfield, running through unaided for a routine score. Dan Biggar kicked the hosts level.

Biggar kicked a penalty soon after, from just inside the Irish half, to make it 10-7 to Saints.

The game was ebbing and flowing nicely – and it was Irish who were on the scoreboard next midway through the half.

A sublime move in the backline saw Terrence Hepetema offload the ball to Ollie Hassell-Collins and the speedy winger did the rest, leaving three Saints defenders trailing in his wake to score under the posts. Jackson kicked the conversion, to make it 14-10.

It was like a basketball match, with play swinging from one end to the other – as Saints, from their very next attack, regained the lead, courtesy of Alex Mitchell’s try. Biggar’s kick made it 17-14 to Saints.

Irish were reduced to 14-men from the kick-off, when Ben Loader was adjudged to have taken his man out in the air, and was shown a yellow card.

The hosts made their numerical advantage tell on 28 minutes, when Mitchell ran through unopposed from midway inside the Irish half and dived over in the corner for his second try of the evening. Biggar’s conversion hit the upright.

Biggar made no mistake on the stroke of half-time though, slotting home a penalty to make it 25-14 to Saints at the half.

Irish started the second half in the ascendancy and they were rewarded when – following a fine break from James Stokes – the Exiles recycled the ball and from the next phase, Tuisue crashed over.

Saints responded in kind though on 52 minutes, when from a five-metre scrum, the ball was fired out wide to Ollie Sleightholme, who dotted down in the corner.

It went from bad to worse four minutes later, when Piers Francis went over in the corner, with Biggar kicking the conversion, leaving Irish with a mountain to climb.

Irish did, at least, secure a try bonus-point, when Ben Loader arrived bang on cue to George Nott’s pass to sprint through under the posts for the visitors’ fourth try – Jackson converting.

That proved to be the final score of the night, as Irish headed back to London on the end of a disappointing defeat, ahead of a huge home game at the Brentford Community Stadium against Harlequins next weekend.