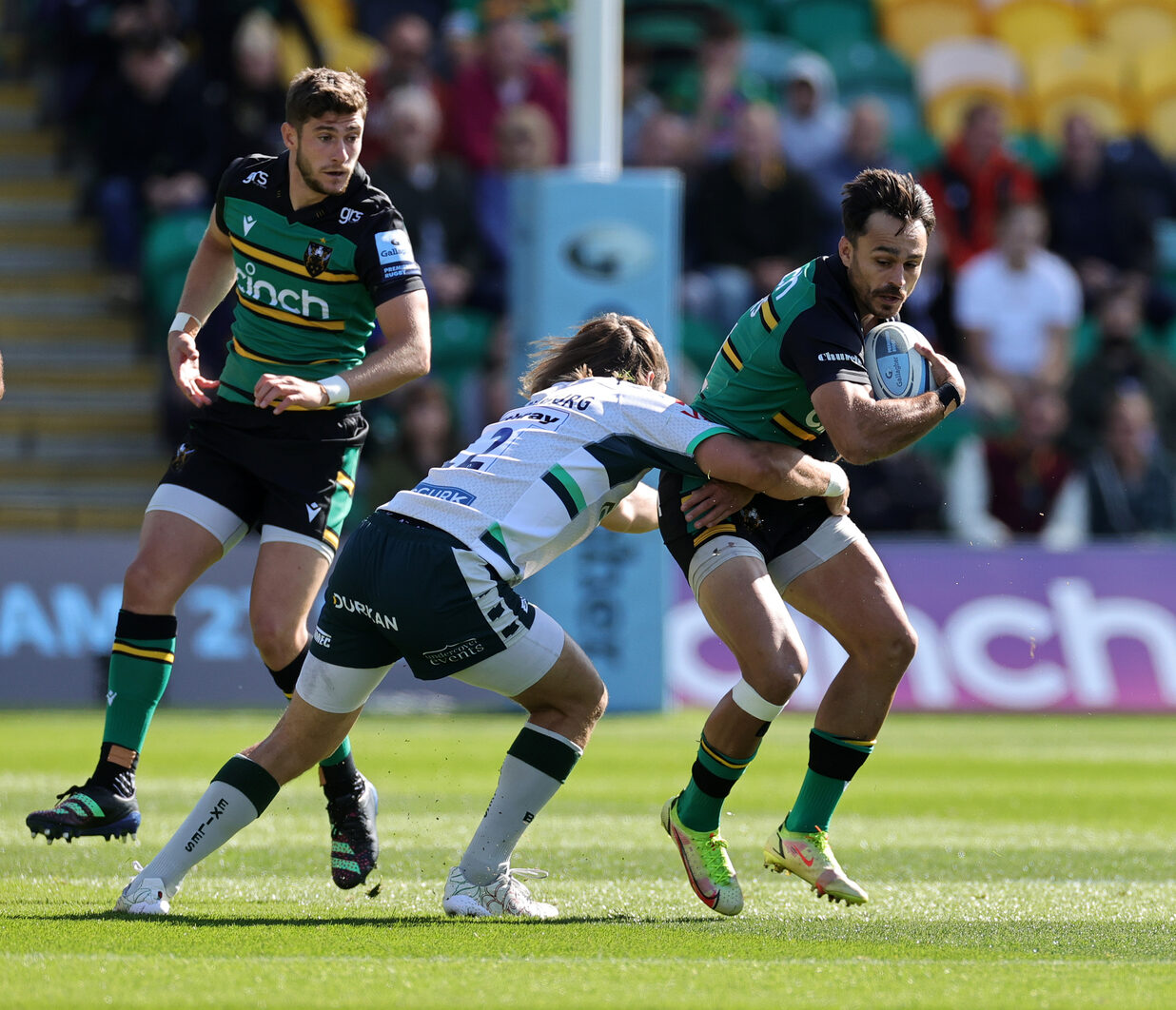 London Irish succumbed to a 38-22 defeat at the cinch Stadium at Franklin’s Gardens, Northampton Saints walking away with all five points available in Round 2 of the Gallagher Premiership.

Northampton took a 10-0 lead into the break after Juarno Augustus’ converted try and a James Grayson penalty, Irish losing personnel with three yellow cards late on into the first half.

Irish indeed scored the first points of the second half with a Paddy Jackson place kick, but Saints backs Ollie Sleightholme and Alex Mitchell rounding off the third quarter with a flurry from the men in Black, Green and Gold.

The visitors posed a question with a Will Joseph score and penalty try, but their opponents pulled away with George Furbank’s try securing the try bonus and Ollie Hassell-Collins five-pointer proving merely a consolation.

Saints threatened early with a catch and drive move after an Irish infringement from kick-off, but solid maul work from the Exiles forced a turnover in possession.

A Henry Arundell kick from hand into space saw the hosts pushed back into their own 22, and from the recovering phase, a knock-on was forced by Irish with the healthy territorial gain maintained.

Irish was penalised for not releasing in a mount towards the whitewash, and Northampton were first to get their names on the scoresheet 10 minutes in.

Alex Mitchell’s smart chip into the backfield and collection of the ball released the scrum-half into a large portion of the park beyond the Irish backline, then finding Juarno Augustus on the wing to touch down and James Grayson to convert.

Benhard van Rensburg’s brilliant tackle on Mitchell after resumption forced Saints in their tracks, the returning Matt Rogerson employing excellent groundwork before the Midlanders double movement to hand Irish back the ball. 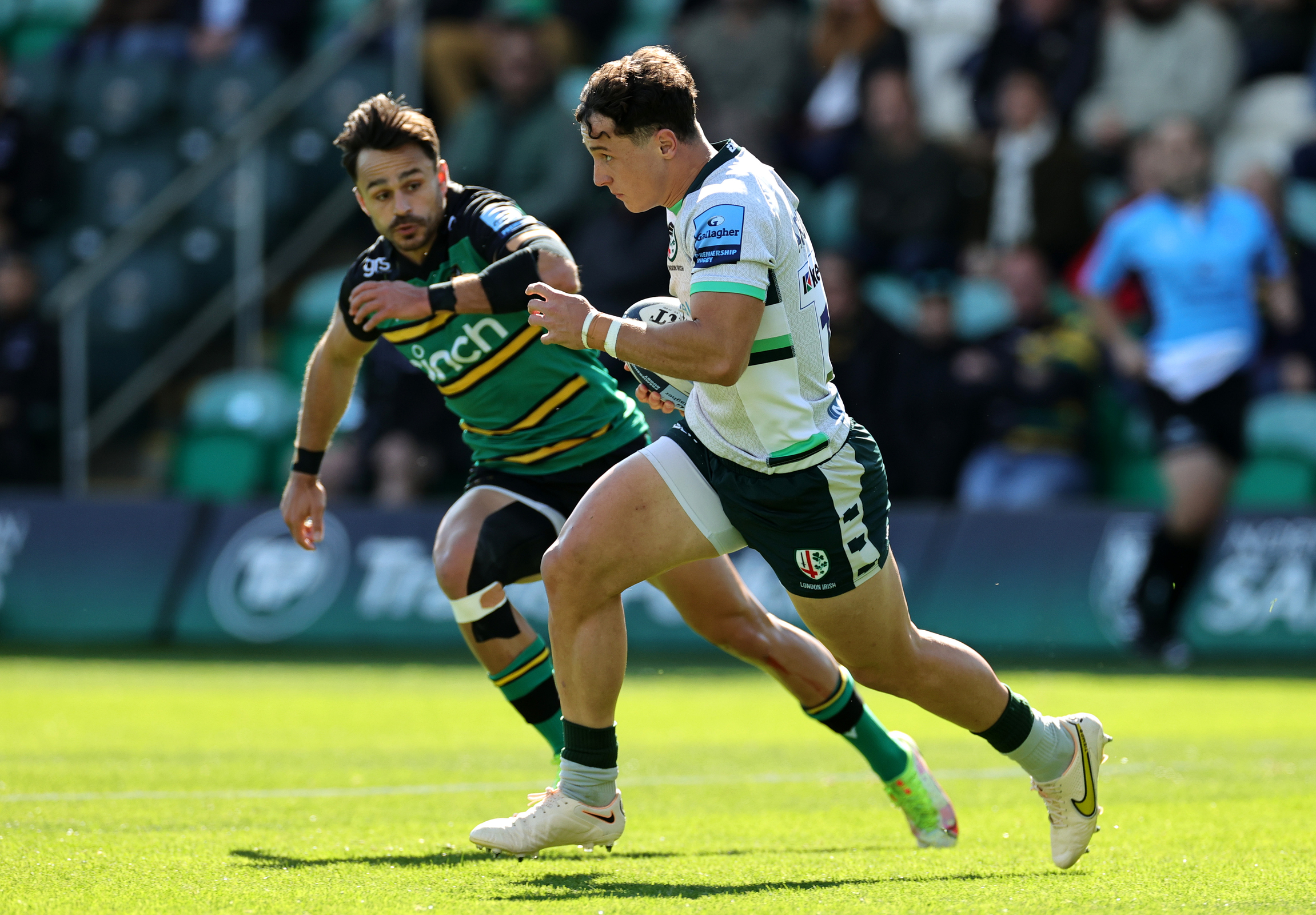 Intent from Declan Kidney’s men was evident, but resolute Saints defence at the breakdown and then into the scrum after previous dominance for Irish meant the Exiles were muted in the opening quarter.

An early push at a lineout maul saw Irish work with the advantage, and after another set-piece move and several phases later, Adam Coleman looked to have stretch over the try line but was held up.

Play was stopped 12 minutes from half-time when Facundo Gigena took a heavy blow to the head in contact, with new signing Danilo Fischetti taking his place for the game’s remainder.

Adam Coleman’s race was run in the final 10 minutes of the half after an awkward step, former resident of Franklin’s Gardens Api Ratuniyarawa elected to take his place in the engine room.

In Irish’s time of need, van Rensburg’s recovery defence saw the centre take George Furbank to the floor and then field a nudge through to the line as Saints threatened.

A potential leveller was brought back by Pearce after a sensational breakway into the broken field from Curtis Rona which was eventually finished off by Henry Arundell, the score being chalked off due to a side entry in the build-up.

Grayson slotted the resulting penalty to extend his side’s lead to double figures before the interval.

Irish was reduced from their full complement even further, firstly after Arundell’s touch out of play deemed deliberate by referee Luke Pearce, and then a deliberate knock-on from Rob Simmons meant the Exiles would enter the second stanza down to 12 men.

Their blushes were spared as the clock went into the red and Saints attacked from a lineout, a spill from Sam Matavesi preventing a further punishment for the west Londoners as time went up. 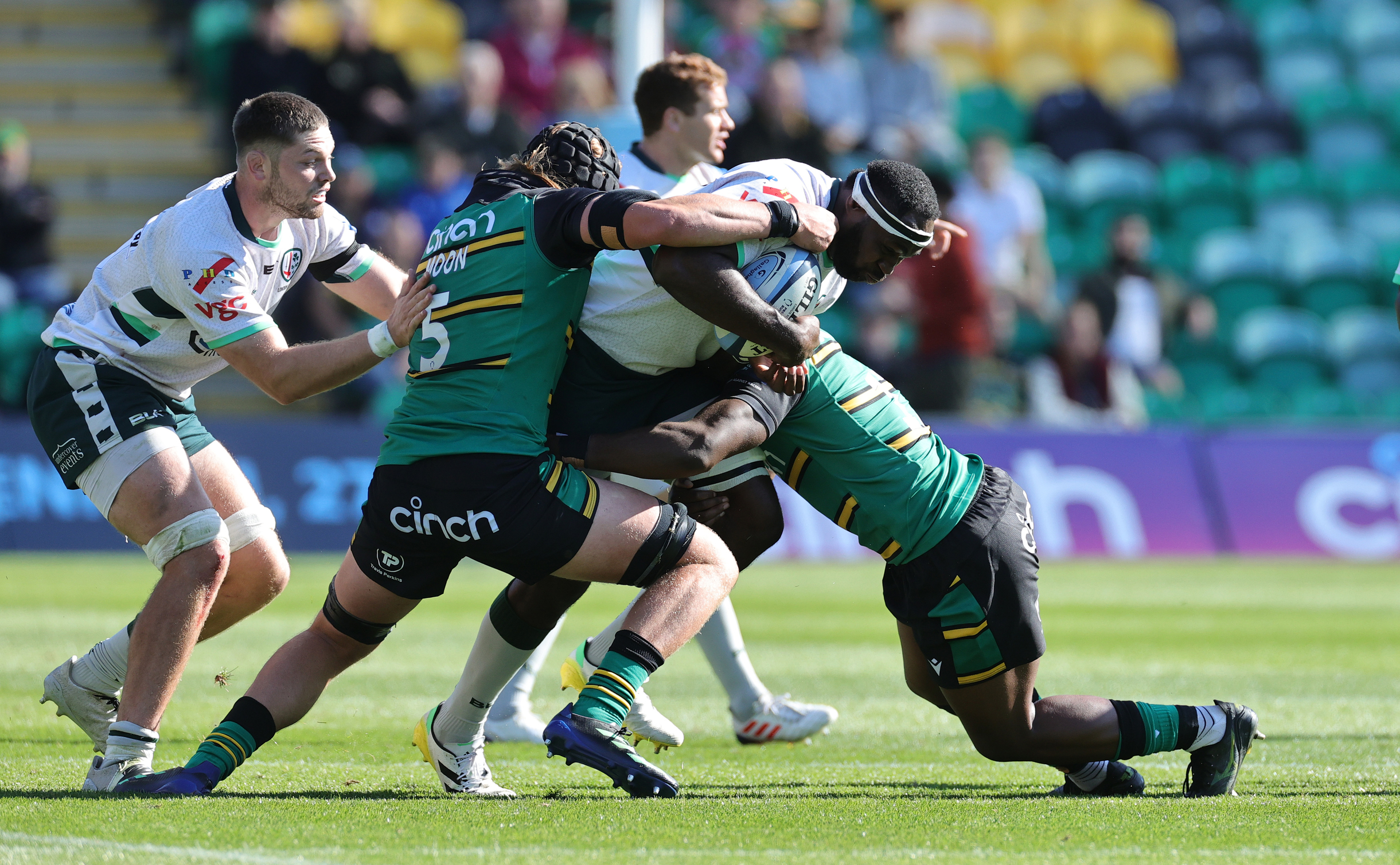 Irish were the first to register points in the second forty, a knock-on from Saints and then illegal scrum handing Jackson a chance to split the posts left of centre from the 22, which the stand-off converted.

The Exiles had the rub off the green off the ball as Northampton closed the gap at the throw-in, but there was nothing lucky about Ollie Hassell-Collins and Danilo Fischetti’s defence on the left flank with the Italian pilfering back the ball.

Just as Pearson was reintroduced, Irish’s defensive output matched that of 15 men and more as Northampton found no way through, eventually forcing another Saints drop of the ball.

Northampton did get their second try despite Irish’s efforts, exposing a numerical advantage on the right channel to dot down via Ollie Sleightholme, but the try was unconverted to leave Irish 12 points adrift.

Mitchell’s smart snipe made up for the temporary points loss as the quick move took Saints further into comfort, Grayson making no mistake in front of the uprights.

The ascent of Phil Dowson’s side continued as Grayson kicked a second field goal as Irish didn’t roll away. 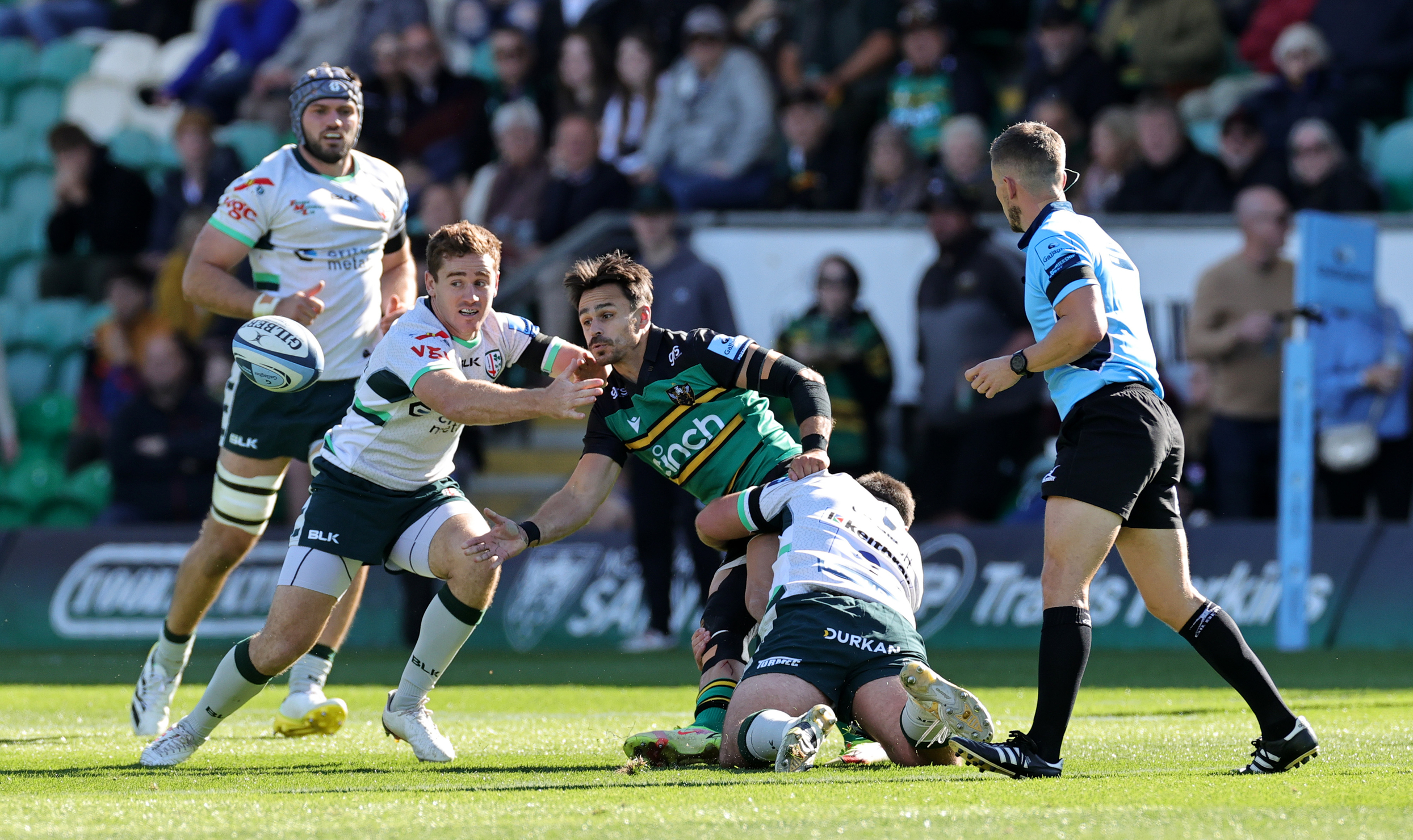 Irish made their imprint on the affair with an attacking try expected of the meeting of the sides, Hassell-Collins’ linebreak setting the tone before a feed to Arundell brought Irish closer.

The youngster’s smart step infield prevented the ball being take into touch and Arundell passed to fellow England international and replacement Will Joseph, collecting the offload well to touch down in a swift move involving all outside backs.

The Boys in Green had the taste for it- Curtis Rona making inroads through midfield after tracking his midfield partner van Rensburg, but his pass was deliberately blocked by Grayson and the fly-half saw yellow, Irish being awarded a penalty try as Donnell was in the clear.

Grayson edged Saints beyond 10 points from the tee after an Irish offside infringement, and the game was all but wrapped up as captain for the day George Furbank touched down from short range and Grayson converted.

Furbank took three points of his own late one, but the Exiles would have the last say with a flowing move that wasn’t Irish’s first of the day.

Hassell-Collins came with the touchdown with the clock in the red after linking up with Arundell, replacement Caolan Englefield skilfully putting away the extras swiftly from out wide to conclude 38-22 in favour of Northampton Saints.