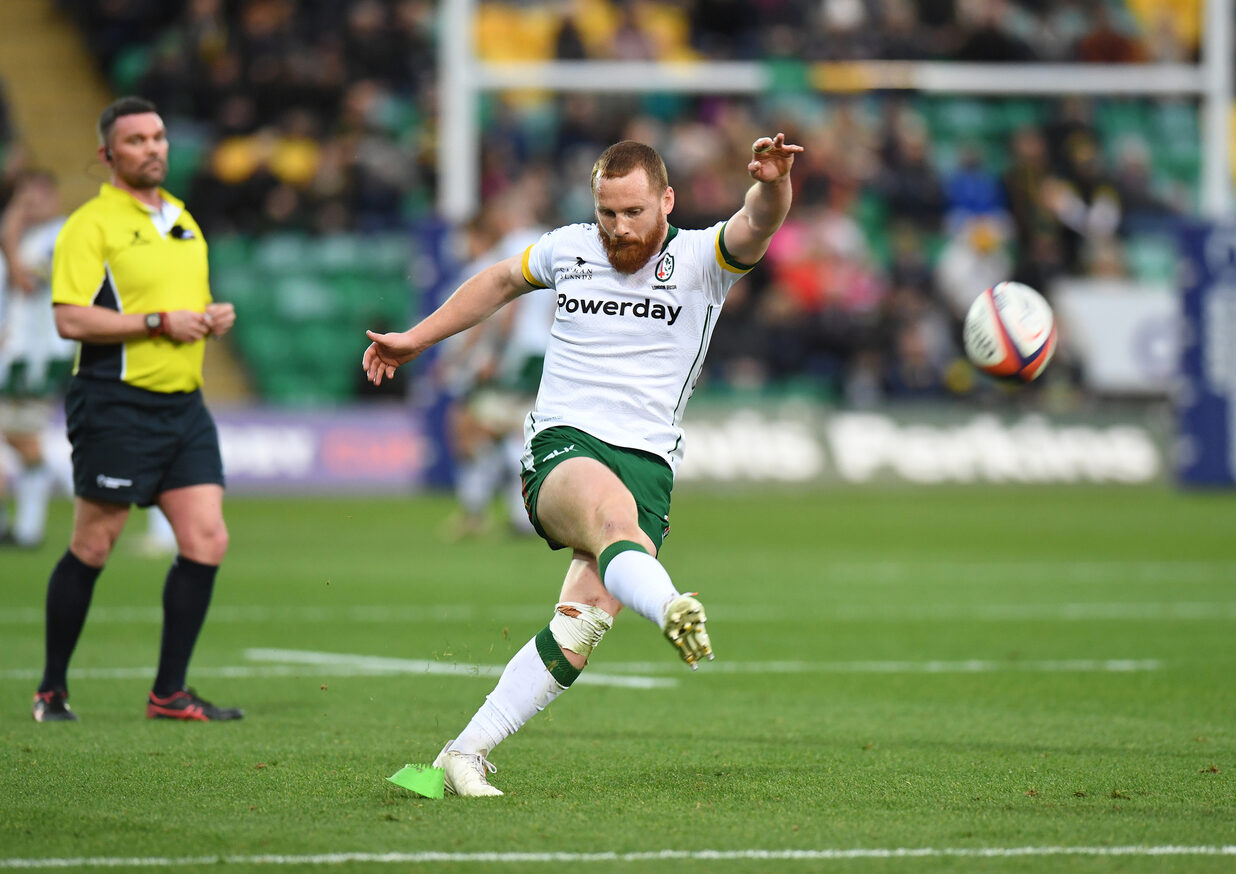 London Irish survived Northampton Saints’ second-half fightback to secure their first Premiership Rugby Cup win on the opening weekend of the tournament, winning 36-26 at the cinch Stadium at Franklin’s Gardens.

The Exiles scored four of their five tries in the first period, maintaining a 19-point lead at the interval with tries from James Stokes, Chunya Munga, Hugh O’Sullivan, and Benhard Janse van Rensburg.

Saints demonstrated their character, replying with scores of their own from James Fish, Josh Gillespie and Tom Litchfield, with the latter’s converted try levelling proceedings with eight minutes remaining.

Van Rensburg completed his brace to further the distance between the sides in the dying embers, with Rory Jennings’ subsequent conversion and penalty settling the result for the second consecutive week.

Early errors from the hosts allowed Irish to alleviate some pressure after Reece Marshall’s lineout was deemed not straight, with Isaac Curtis-Harris peeling off the scrum only for his offload to escape the grasps of Cillian Redmond.

Saints were close to getting the breakthrough but for James Stokes’ crushing tackle on Tom Litchfield before the goal line, with the ball then held up on the line in the following phase.

The Exiles opted for the corner when awarded their maiden penalty in the opposing ‘22, registering the first points of the affair through Stokes as the full-back crashed over with Rory Jennings adding the extras.

Declan Kidney’s men wasted little time in capitalising on their momentum with lock Chunya Munga executing a tricky finish in the corner minutes later following excellent passing in the build up.

Hugh O’Sullivan capped off his debut in scintillating fashion by crossing over, completing another fluid attack when receiving captain Jack Cooke’s offload, with Jennings slotting his second conversion.

The Franklin’s Gardens crowd demanded a response from their team after Irish’s blitz in the opening 20 minutes, and they were rewarded through another debut try, this time for George Hendy.

The men in Black, Gold and Green were knocking on the door with two rolling mauls, which then saw the ball recycled out to Josh Gillespie, spotting the gap in the Irish line to work the ball out to Hendy to smartly collect and touch down.

Solid defensive ethic from Irish stunted Saints’ attempted resurgence, firstly through a Cooke lineout steal and then a turnover from Olly Cracknell, the latter of whom made a notable impression in his first outing for the Exiles.

It was Irish who struck the final hammer blow of the opening forty minutes through new summer signing Benhard Janse van Rensburg, extending his arm over the whitewash amid a barrage of tackles for his side’s fourth of the afternoon.

Irish’s patient defensive resolve was tested in the opening proceedings of the second-half, but the visitors as ever remained resolute, executing not one but two turnovers when it looked most likely Saints would breach through.

Northampton nonetheless eventually crossed for their second of the afternoon, James Fish bundling over with James Grayson maintaining his perfect record from the boot in the match.

The East Midlands outfit narrowed the deficit a man to the good after van Rensburg was sent to the bin, Josh Gillespie receiving a rangey looping pass and diving down from the wing to take his side within a converted score.

The unrelenting pressure from Chris Boyd’s side meant Irish were penned into their own half, with centre Rory Hutchinson penetrating through the heart of midfield to work the ball out to Litchfield and the latter touching down, with Grayson’s conversion levelling the scores.

Benhard Janse van Rensburg returned to the field from the bin and with his second action with ball in hand scored Irish’s reply by acrobatically dotting down in the corner, Jennings adding his trademark vital conversion.

Jennings extended the lead to ten with a penalty goal from Saints’ 10-metre line with just three minutes remaining on the board, stifling the hosts’ valiant second-half comeback and confirming Irish’s first win of the Premiership Rugby Cup.