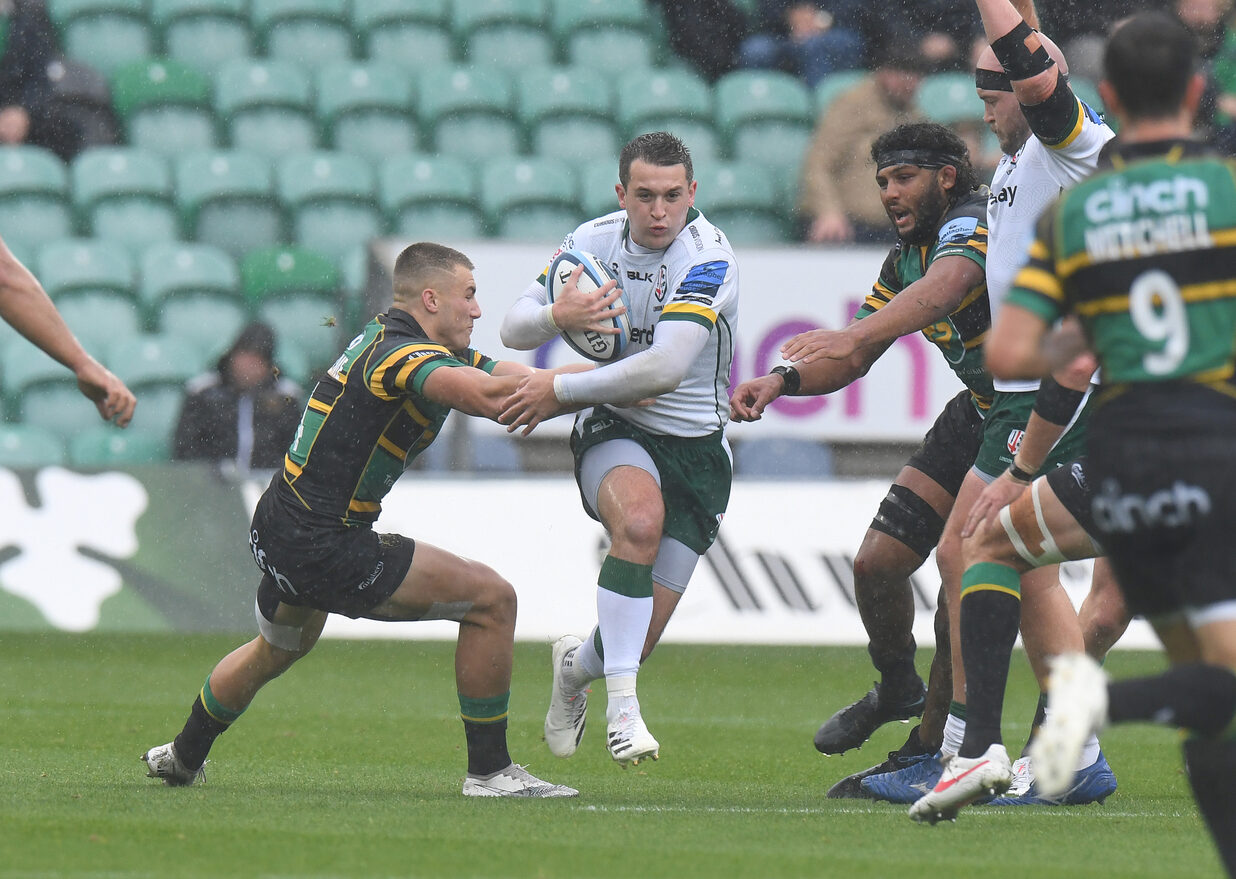 London Irish went down 23-21 in a wet and windy contest against Northampton Saints in Round 3 of the Gallagher Premiership.

The hosts were the first to make an impression on the scoreboard. A high tackle from Irish on three minutes gave Dan Biggar an early opportunity for three points. The fly-half knocked the easy kick over and Saints led 3-0.

Just two minutes later, Irish gave Northampton another penalty, this time for holding onto the ball on the floor. Biggar kicked to the corner and gave Saints a good attacking platform on Irish’s 5m line. However, Benhard van Rensburg delivered a crunching hit in midfield to dislodge the ball as the hosts pressured the Exiles line - a great piece of defensive work from the summer signing.

On eight minutes, Saints secured the first try of the match. Tom Collins was the recipient of some quick hands and slid over in the corner. The conversion was added by Biggar and Saints led by ten.

Nine minutes later, Matt Proctor slid over for Saints’ second of the day. A clever grubber through allowed Proctor to drop on the loose ball and slide over, with the aid of the wet conditions. Biggar’s conversation was successful, and Irish found themselves 17-0 down.

With half an hour gone, Irish had entered the hosts’ 22m three times - but three times the ball had spilled forward. A frustrating period for the Exiles.

However, Irish were finally rewarded for their efforts just before the break. Agustin Creevy slammed over the line from close-range under the posts after numerous carries from the Exiles' forward pack. Paddy Jackson added the conversion and the Exiles cut the lead to 17-7.

It was almost the perfect start for Irish in the second half, but two illegal passages saw them stopped on the Saints line. At the end of that passage, Northampton’s Api Ratuniyarawa was sent for 10 minutes in the sin-bin.

Undeterred, from the next phase, Irish had their second try! Saints tackled Creevy through a maul to stop a try - resulting in the award of a penalty try. Saints’ Paul Hill was shown a yellow card and Northampton were down to 13 men. The lead was cut to 17-14 - game very much back on.

Saints worked hard to soak up the Irish pressure. On 59 minutes, they were awarded a penalty and Biggar was successful from the tee again, extending the hosts’ lead by three.

It was Irish who got the next points! Tom Parton sprinted clear, after an Ollie Hassell-Collins break, to dot down. Jackson added the conversion to put Irish in the lead for the first time in the match, 20-21.

With 10 minutes to go, it was a tense atmosphere at Franklin’s Gardens.

Unfortunately for Irish, some pushing and shoving gave Saints an easy penalty in front of the Irish posts. Biggar kicked it and put the hosts back in the lead with six minutes to go.

With the clock in the red, Jackson's drop goal attempt missed - and despite the TMO looking at both a high tackle and a no arms tackle, neither were awarded, to leave Irish once again pondering what might have been.