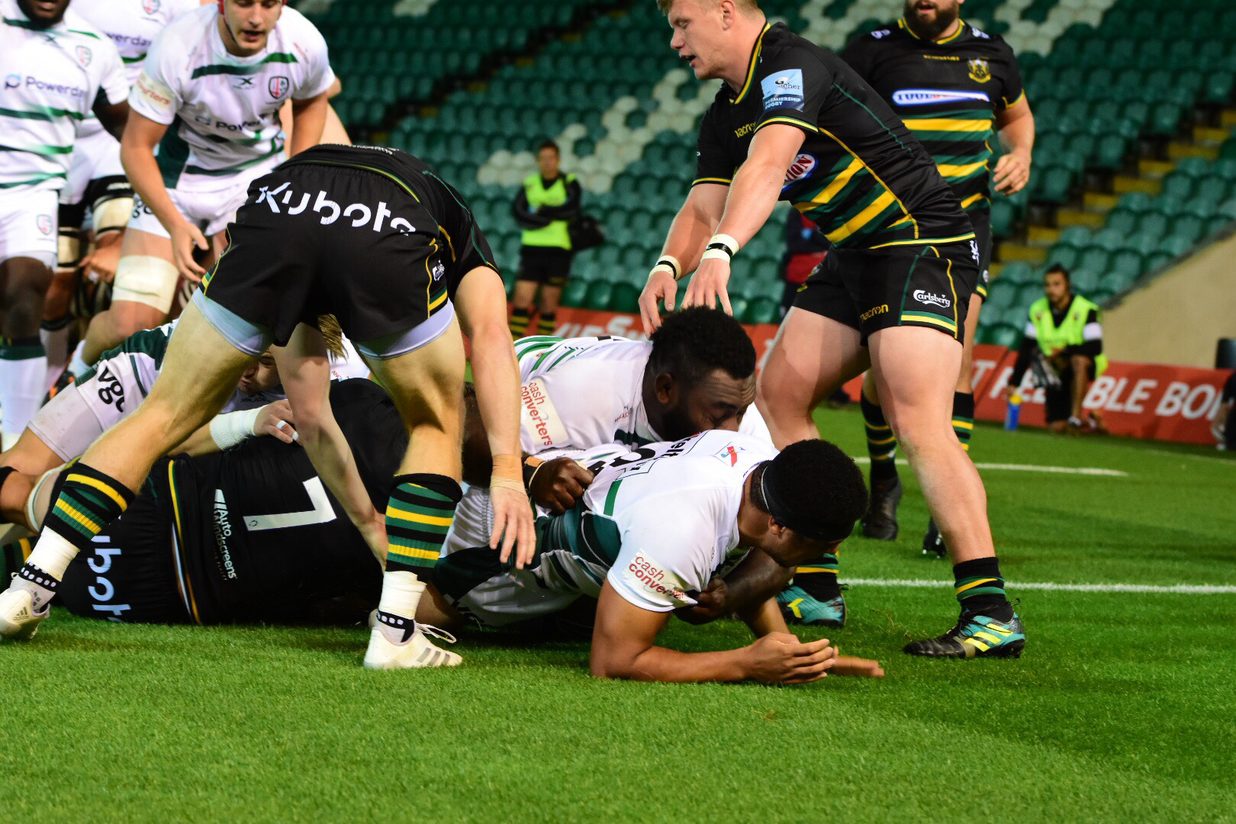 Brand’s intelligent score coupled with a brace from the returning Napolioni Nalaga and a try apiece from Ben Atkins and Ciaran Hearn capped off an impressive night for Declan Kidney’s men.

The Exiles stepped in to play last season’s A League champions by virtue of Wasps’ front-row crisis, Irish underlining their character in abundance throughout the contest to leave the Gardens with a win.

It was first blood to Northampton as early as the first minute, winger Matt Worley sprinting 40 metres to touchdown in the corner despite the best efforts of a covering Ben Loader. Grayson converted with pinpoint accuracy from the touchline to give his side a 7-0 lead.

The hosts continued to play an expansive game on the lush bowling green of a surface and had their chances to increase their advantage, however Irish stood firm in the face of adversity to keep the score at 7-0.

On 12 minutes Irish got reward for their endeavor in defence, Ben Atkins flopping over from the back of a dominant rolling maul to get his side back in to the contest. Atkins, brother of Jacob, had a solid game in the front-row on the back of his outing for the Wildgeese at the weekend. Theo Brophy Clews was unable to add the extras with Northampton leading 7-5.

Irish edged in front on 22 minutes courtesy of Canadian international Hearn following a barnstorming carry from Sebastian De Chaves. De Chaves got his side within metres of the whitewash, before the ball was flung wide to Hearn on the overlap for the score.

10-7 up, the Exiles had to soak up some intense pressure from the hosts and with half-time looming, Northampton hooker Reece Marshall dotted down from a rolling maul. Grayson’s conversion gave Northampton a 14-10 interval lead.

Northampton began the second period in spritely fashion, but it was the visitors who were off the mark first courtesy of Nalaga. The former Champions Cup winner marked his return to action with a try thanks to Brophy Clews’ break and offload. Brophy Clews was stifled by a challenge following his offload and was replaced by Jacob Atkins who knocked over the conversion to make it 17-14 to Irish.

Northampton, to their credit came back at Irish all guns blazing, with Fraser Strachan and Ollie Sleightholme crossing for a quickfire double to put Wanderers back in the assendancy at 26-17.

However, it was Irish who were celebrating at the end as first Nalaga bagged his double, before Brand came up with the decisive score five minutes from time. The former England U20 scrum-half sniped his way to the line from the base of a controlled scrum.

Irish had to face a barrage of Wanderers attacks late on, but they held on to secure a memorable triumph at Franklin’s Gardens.