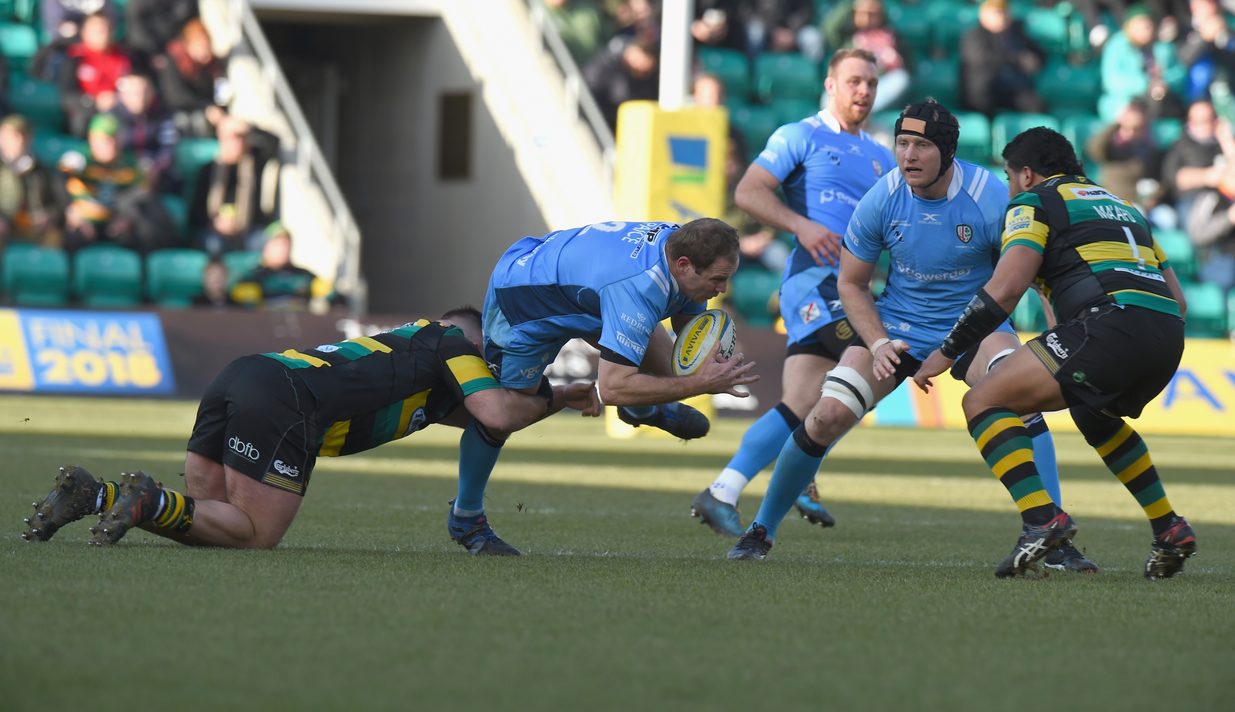 A strong first half display from London Irish was overturned by a clinical Northampton Saints outfit as they secured a 25-17 Aviva Premiership victory at Franklin’s Gardens.

Three Saints tries in the opening 10 minutes of the second half proved decisive, George North, Rob Horne and Mikey Haywood all crossing for the hosts.

There was a real sense of optimism within the Irish camp going into the break after two Alex Lewington tries had put Nick Kennedy’s men in the ascendancy at 14-3. Lewington bagged the first of his brace on seven minutes, the speedy wing hacking a loose ball into Saints’ in goal area to touchdown to the delight of the travelling Exiles contingent. Greig Tonks, on his return to the starting XV, converted from the touchline to give his side a 7-0 lead.

Lewington’s second try came just before the half hour mark when the TMO was called into action, ruling that the speedster had grounded the ball ahead of Wales international North. The likes of Ollie Hoskins and Arno Botha set the platform with a series of aggressive ball carries, allowing Tonks to assist Lewington with a neat grubber.

Saints continued to pile on the pressure with a resolute Irish defence restricting fly-half Piers Francis to a penalty on 28 minutes, which reduced the deficit to 14-3. Irish went close to crossing for their third try of the afternoon in the dying embers of the first half, with the Exiles pack causing mayhem upfront. However, Northampton went unscathed and Irish had to settle for a 14-3 interval lead.

Looking to build on their advantage, Irish were dealt a blow as early as the first play of the second half when North scythed in at the corner. The potent wing rose to palm the ball back from the restart and following a succession of phases, North got on the end of a swift attack to dot down in the corner. Francis added the extras to get his troops to within four points of the visitors.

Five minutes later, Irish were hit with another sucker punch as Horne squeezed in at the corner despite the desperate efforts of a scrambling Exiles rearguard. This time, Francis shanked the subsequent conversion and Irish trailed by just a point.

You felt that the next score was crucial to the outcome of this contest, and so it proved as Haywood flopped over from the back of a driving lineout to increase his side’s advantage on 48 minutes. Francis nailed the conversion to make it 22-14.

On 51 minutes David Paice’s record breaking swan song came to an end as he was substituted to a standing ovation from both sets of supporters. It was the former England international’s 283rd appearance for the club, eclipsing the record previously held by Topsy Ojo.

With the hour mark looming, the Exiles freshened things up with the introduction of a string of players from the bench including Dave Porecki who was impressive during his stint on the pitch.

Irish let slip a golden opportunity on 53 minutes when Joe Cokanasiga fumbled Luke McLean’s offload with the try line at his mercy. Three minutes later Tonks kept Irish within touching distance of Saints by virtue of a well-executed penalty to set up a tense finale.

22-17 behind, Irish had given themselves a real sniff of victory, however a clever Francis drop-goal eight minutes from time gave Saints the impetus to push home their advantage and deny Irish victory.