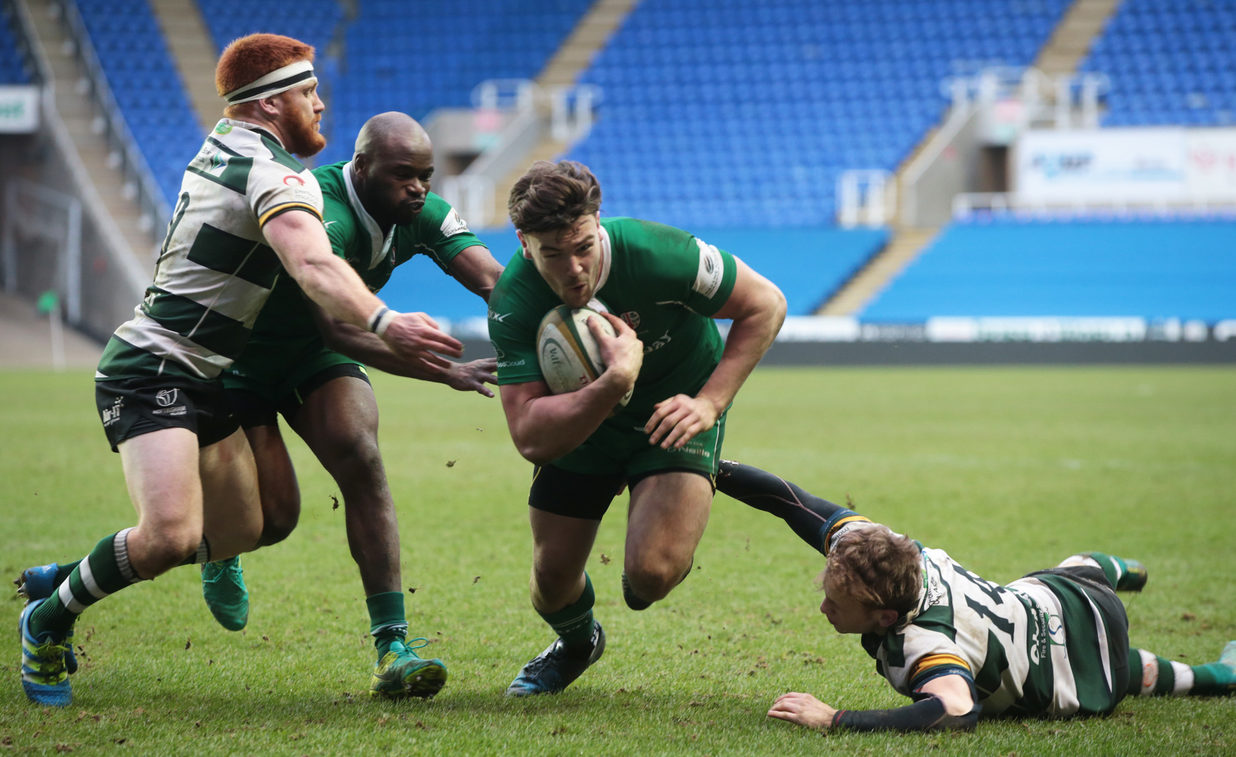 On a weekend when London Irish duo Tom Parton and Joe Cokanasiga wore the Red Rose with pride, it was fitting to see former England Under-20 Junior World Cup-winner Johnny Williams scoop the man-of-the-match award following a 60-14 dismantling of Nottingham in the Greene King IPA Championship.

Williams, a product of the club’s Academy, capped off a stirring performance by crossing for one of the Exiles’ nine tries as Nick Kennedy’s charges stretched their winning sequence to 14 games in the league.

Equal to everything that was thrown at him in defence, Williams was back to his best in the attacking stakes too, with his potent running game coming to the fore throughout the afternoon.

The pack, spearheaded by locks Sebastian De Chaves and Will Lloyd, were the bedrock of a clinical display that enabled the likes of Williams, Aseli Tikoirotuma and Fergus Mulchrone to utilise their pace in the channels.

After James Marshall had booted Irish three-up inside the opening exchanges, Tikoirotuma crossed for a well-worked try on 16 minutes. A series of carries from Irish’s heavies got the hosts to within 10 metres of the try-line, before the ball was spun wide to the Fijian flyer for the score.

Irish increased their lead moments later, Harry Elrington burrowing his way over the line following a dominant rolling maul. 13-0 up, Irish pressed home their advantage before the interval by securing the try bonus-point thanks to Ben Franks and Scott Steele.

The irrepressible figure of two-time World Cup-winner Franks was no match for Nottingham’s rearguard as he crashed over on the half-hour mark, prior to Steele’s pick and go on 36 minutes. Marshall converted Steele’s score to put Irish in the ascendancy at 27-0 going into the interval.

Nottingham came out for the second period in determined mood, and to their credit they hauled themselves back into the game through a Murray McConnell try. Excellent support play from the Green and Whites unhinged Irish’s defensive line and McConnell crossed under the posts. Lawrence Rayner’s conversion reduced the arrears to 27-7.

However, McConnell’s try proved little more than just a consolation as Irish’s dominance continued to flourish. With 47 minutes on the clock, the impressive Williams got in on the act by fending off three would-be tacklers on his way to the line. Marshall made no mistake with the conversion to extend his side’s lead to 34-7.

Another positive was the return of Danny Hobbs-Awoyemi, who came on as a second half replacement after recovering from a shoulder injury that has put paid to much of his season. Awoyemi, a summer recruit from Northampton Saints, played his part in Irish’s sixth score of the afternoon as he trundled the ball towards the line. In keeping with the theme of the day, the pack made valuable metres with birthday boy Joe Trayfoot marking the occasion in style by touching down. New Zealander Marshall made it 41-7 with the conversion.

Ofisa Treviranus was next to get in on the act as he pounced on a loose ball that had deflected off a Nottingham defender in an offside position to score. With Marshall replaced in the second period, Greig Tonks took over the kicking duties to boot Irish further ahead at 48-7.

Seven minutes later Dave Porecki dived over from close-range for a converted try with Topsy Ojo rounding off the scoring eight minutes from time. Record try-scorer Ojo got on the end of a backline move which involved an unselfish offload from Treviranus. The Samoan’s telling contribution in the build-up epitomised Irish’s display which was dripping with spirit and desire.

Despite the visitors having the last say courtesy of a Darryl Veenendaal try, the day belonged to Irish who will be keen to continue the winning feeling when London Scottish travel to the Madejski Stadium on Saturday 25th February.

Tickets for the Scottish game are available by calling the Ticket Office on 0118 968 1016 or click here to purchase online.