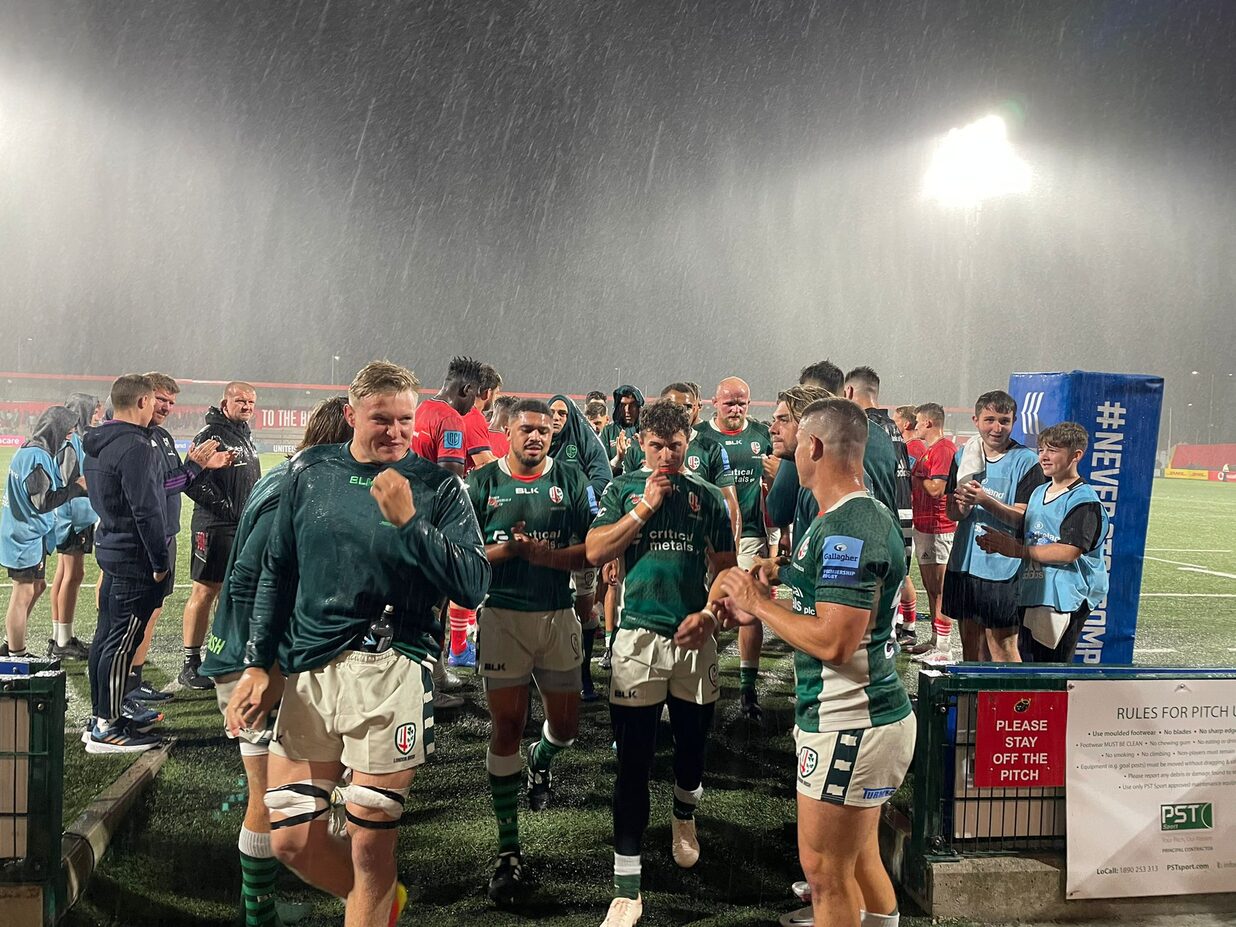 London Irish capped off their pre-season in style with a fine 19-14 win over Munster Rugby to pick up the Jack Wakefield Memorial Trophy at Musgrave Park, Cork.

On the night of Declan Kidney’s return to his hometown, his side put on a showcase of fine rugby on both sides of the ball from the outset, James Stokes converting a flowing move from the backs in the opening couple of minutes.

Matt Williams bookended the opening half with his own score, building on an impressive showing in Jersey after his positional counterpart Ollie Hassell-Collins’ defensive shift served as a precursor to the second try.

In his first appearance since becoming a capped England player, Henry Arundell picked up where he left off last season with a blistering five-pointer that was sandwiched between two Munster scores courtesy of Mike Haley and Paddy Patterson that proved not enough from the hosts on the evening.

Kidney’s Exiles could not have dreamed of a more perfect start, working their way out to the right wing channel as Paddy Jackson found five eighth partner Benhard van Rensburg, who then charged forward before passing to Ollie Hassell-Collins.

The latter passed onto fellow outside back James Stokes, who, with much to do, navigated an avenue through the red rearguard with sublime acceleration that took the home side by surprise to finish well in the corner.

Jackson’s extras, from the touchline, split the posts at Musgrave Park and Irish were seven points to the good, with Munster frustration continuing with a lineout deemed not straight from referee Chris Busby.

After each side could not get the upper hand from the opening scrums, Munster were penalised for being in at the side from a ruck and Jackson nudged Irish into the opposition 22.

The resultant phases eventually ended in a reversal of ball possession in favour of the province after a knock-on, but van Rensburg recovered well when Simon Zebo threatened on a potential breakaway.

Good groundwork in midfield from Stokes then enabled Irish progression with a penalty, yet an Irish seal off at a threatening maul prevented a chance of a second score.

Matt Williams proved his kicking credentials after last weekend once more in successive phases, keeping the ball in play when a foot in touch seemed likely to then retrieve the ball back and grubber a kick through to van Rensburg, who unfortunately knocked on.

Munster’s most likely advance saw a well-positioned scrum following a spill from the Exiles falter, and a decent Jackson clearance meant Irish could relax for the time being.

Up other end of park, a subsequent lineout infringement from those in red preceded smart and bustling carries respectively from Ben White and van Rensburg, but Irish had to bide their time in hopes of an important second score after a penalty was conceded at the breakdown.

One of the first signs of pacy Munster play spawned from a striding Alex Kendellen carry, but a brilliant jackal turnover from Ollie Hassell-Collins soon after stopped the Irish side in their tracks.

Hassell-Collins made himself busy once more on halfway in retrieving the ball away from his opponents, Ben White putting through an awe-inspiring 50:22 box kick and Irish were tucked into the opposing 22 once more.

Van Rensburg, first receiver off the lineout, crashed and clattered through Munster men again, and two phases later, Williams was found in an overlap by Stokes to gain the assist for the Academy product’s try.

Jackson’s conversion was wayward, but Irish were ahead by 12 heading into the break.

Ben White’s soaring box kick into touch meant Irish surrendered the ball for mere moments after a Munster throw-in wasn’t straight, Irish then working down the blindside of the scrum in what was the last significant action from the Exiles in a brilliant first-half showing.

Turnovers were seemingly the order of the day for Irish, Matt Cornish making his mark over the ball after Diarmud Barron’s charge off the back of a lineout after resumption.

Munster did however benefit from much more of the ball in the second-half’s opening ten minutes, and made their ball in hand count with a well worked try involving Malakai Fekitoa and Paddy Patterson who passed to a galloping Mike Haley to finish.

Replacement front-row forwards Danilo Fischetti, Isaac Miller and Lovejoy Chawatama set the standard with a charging set-piece in midfield that they followed up at another dominant put-in.

Irish looked strong going towards the whitewash for the first time in the second stanza, Stokes in particular not knowing when he is beaten in contact but a spill forward brought a promising attack to a conclusion.

The new Irish pack, bolstered by wholesale changes 58 minutes gone, turned over the ball for a Munster scrum in an unheralded yet welcome showing of dominance at the scrum from Irish.

New changes in the backs too worked in Irish’s favour, Luca Morisi drawing in the Munster players before feeding speedster Alexander Harmes to pass to former Academy and England under-20s teammate Henry Arundell- you know the rest.

A splendid score was rounded off with two more points from Jacob Atkins, whose race looked to be run with a head injury assessment with Jackson returning to the field in his homeland.

Munster pressed on in search of a redeeming score, but despite strong defence from the likes of Will Joseph in the build-up, Paddy Patterson feigned his way through opposing tackles to score next to the posts and give an easy conversion and bring his side back within five.

An overcooked lineout from Munster when they were posing questions most in the second half handed Irish some relief, but grafting defence on halfway, with a special mention to Caolan Englefield on former All Black Fekitoa, meant Irish earned their possession reversal with Fischetti reclaiming the ball for his new side.

His compatriot Morisi too demonstrated his skillset on the ground to win back possession for Irish with Munster advancing, winning the penalty and in turn the game as London Irish took home the Jack Wakefield Memorial Trophy.