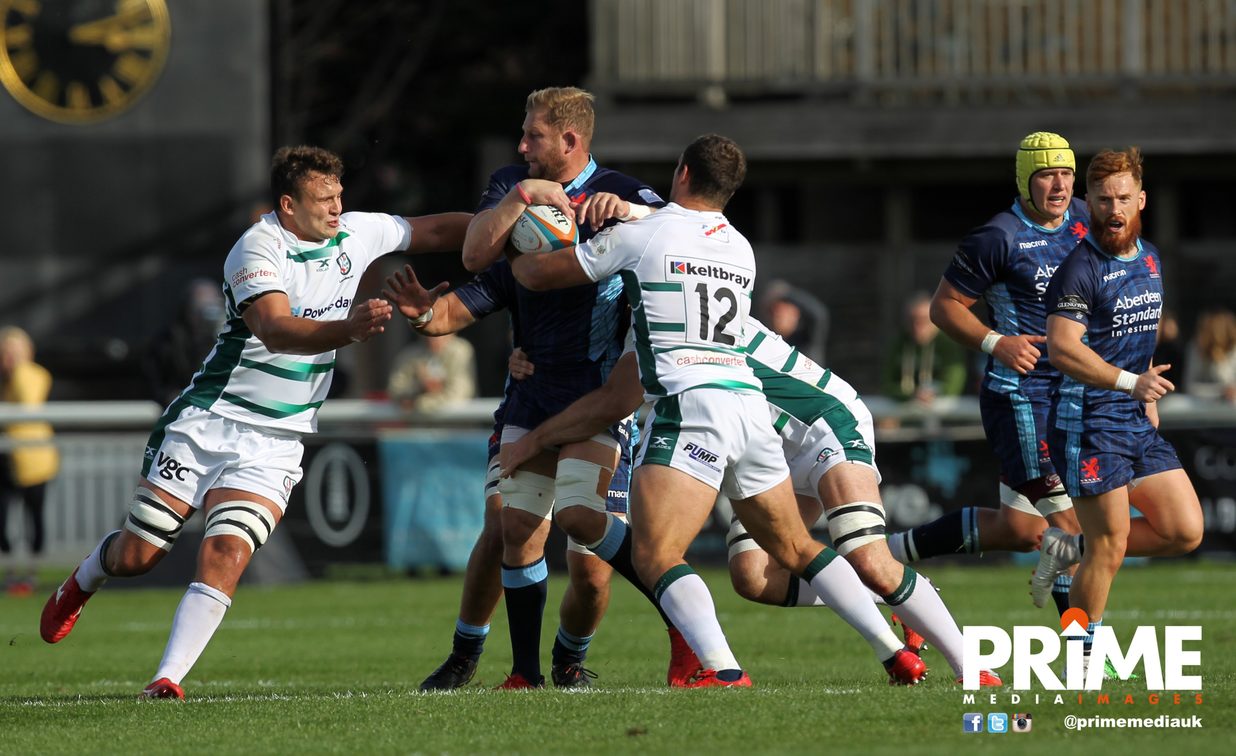 London Irish made it five wins out of five with a comprehensive  54-17 bonus-point victory over London Scottish at the Athletic Ground.

It was first blood to Irish as early as the fourth minute, Tom Parton taking Stephen Myler’s looping pass to cross in the corner. Myler, who kicked six from six, made it 7-0 with the touchline conversion.

The hosts responded in emphatic fashion two minutes later, with veteran No. 8 Mark Bright crashing over for a converted score. Parity only lasted three minutes however, as Brendan Macken swooped in for his second try in as many games to round off a swift backline move involving Myler and Luke McLean. Myler’s inch-perfect conversion from the touchline increased the Exiles’ lead to 14-7.

Bryce Campbell punctured his way through Scottish’s defensive line on 19 minutes to yield Irish’s third try of the afternoon, with Myler’s simple conversion extending his side’s advantage to 21-7. Three minutes later Rory Jennings reduced the arrears to 21-10, the Scottish fly-half slotting home a penalty  after Irish were  penalised for hands in at the ruck.

Just short of the half hour mark McLean secured the bonus-point, strolling in at the corner by virtue of Myler’s ingenuity with ball in hand. Myler’s faultless goal-kicking continued as Irish went 28-10 ahead.

On the stroke of half-time the impressive Matt Rogerson bulldozed his way to the line after a slick backline move got Irish to within a whisker of the try line. Myler again converted to give Irish a handsome 35-10 lead at the break.

On 54 minutes Scottish were reduced to 14 men, Tijuee Uanivi was shown a yellow card for disrupting the breakdown. Irish took full advantage of the extra man, with Ofisa   Treviranus crossing the whitewash within just a minute of coming on. Danny Hobbs-Awoyemi did the hard graft to set up the giant  Samoan international. Myler kicked the touchline conversion, his last act of the game before being replaced by Brendan McKibbin.

42-10 up, Saia Fainga’a got in on the act with a well-worked score on the back of a driving lineout to make it 47-10. Nine minutes from time it was Irish’s turn to play with 14 men as  McKibbin saw yellow for a professional foul with the hosts eying up the try line. From the subsequent penalty, the ball was moved wide to Scottish replacement winger Henari   Veratau to slide over on the overlap. Jennings cut the deficit to 47-17 with the two points.

Ben Atkins made his senior bow on 73 minutes, a proud moment for the London Irish academy graduate, and with the last play of the contest Ollie Hoskins dotted down to get Irish over the 50 point mark. Meehan’s conversion made it 54-17.

Our next home game is against Yorkshire Carnegie on Saturday 13 October, with tickets available by calling 0118 968 1016 or visit ww.lidirect.co.uk.