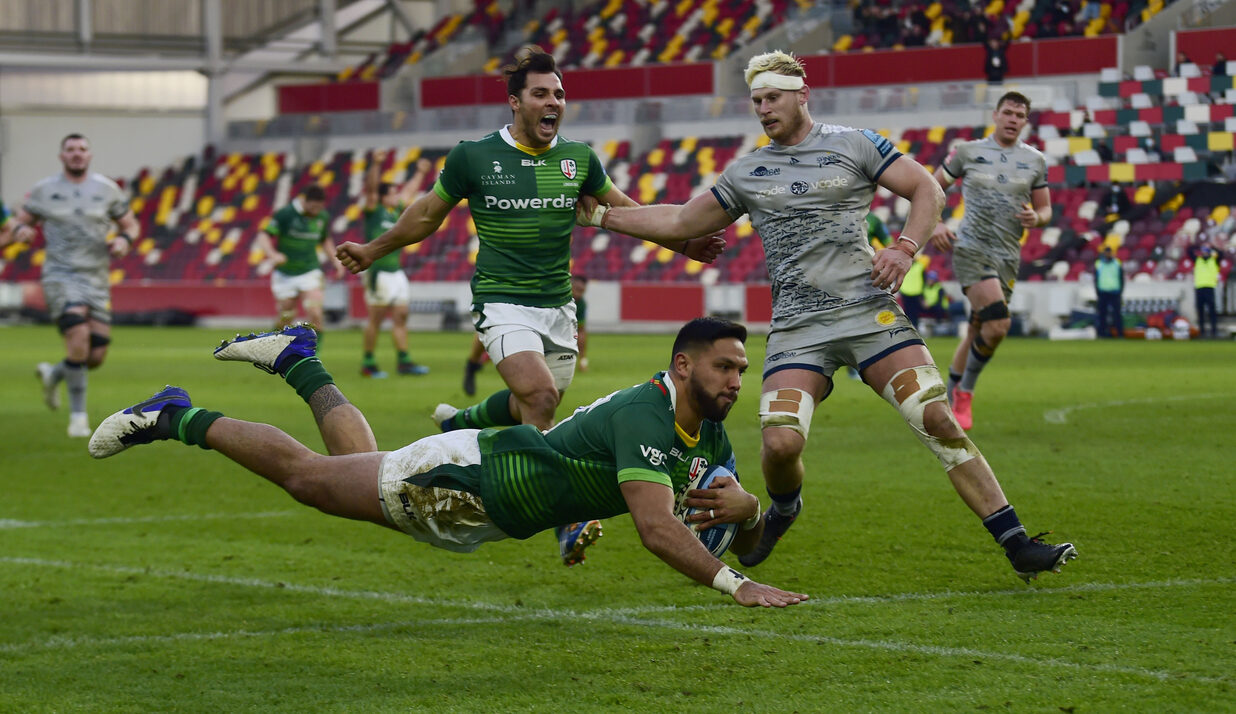 London Irish fell to defeat against Sale Sharks on Sunday afternoon in Round 3 of the Gallagher Premiership.

In a keenly-contested Gallagher Premiership fixture, the Exiles – who were level at 13-13 at the break – were beaten 21-13 at the Brentford Community Stadium.

Backed by 2,000 partisan Exile supporters, Irish kicked off on a brisk yet sunny winter’s day in the capital.

The opening exchanges were typically hard fought, with play swinging from one end to the other, as both sides looked to gain an early stranglehold on proceedings.

It was the visitors Sale, however, who kicked the first points of the contest on eight minutes, with AJ MacGinty slotting over from in front of the posts.

Irish responded positively, with a sustained period of play in the Sharks half, but the early points response they craved wasn’t forthcoming.

Instead, it was the Sharks who added to their early advantage, when a quickly-taken penalty saw Faf de Klerk feed Janse van Rensburg, who crashed over from close range.

MacGinty added the extras to extend the visitors’ lead to ten points.

Soon after the restart, Irish were gifted an opportunity to get some points on the board themselves – Paddy Jackson making to mistake with the boot to make it 10-3.

Sale responded in kind though six minutes later, with MacGinty kicking the Sharks into 13-3 lead with the clock ticking past the half hour mark.

13-3 became 13-6 just before the break, when – after Sale failed to roll away – Jackson kicked his second penalty of the match, with a routine strike from a central position.

There was late drama in the half, though, when the officials went to the TMO – and the decision went Irish’s way, with a knock-on awarded just before Matt Postlethwaite grounded the ball.

And that wasn’t the end of the drama either – as Irish, and that man Curtis Rona yet again – went over for a crucial score with the final play of the half.

Jackson was the architect, seeing a gap and going for it, creating a two-on-one and offloading to Rona, who was left with the simplest of tasks to dive over, for his second try is as many matches.

Jackson added the extras to make it all square at the end of a breathless half of rugby.

The second half was only three minutes old when the next score of the match arrived – and it was the visitors who regained the lead.

Akker van der Merwe touched down after a strong piece of play from the Sharks forwards, but on this occasion, MacGinty failed to kick the resultant conversion.

Irish weren’t about to lie down though, and they were soon going through the phases once again, only for a sustained period of possession to end with a knock-on, just as Sale were seemingly retreating towards their own line.

MacGinty kicked another penalty on the hour to make it 21-13 to the visitors, extending their lead to eight.

The 2,000 fans who were in the stadium were certainly witnessing a pulsating match, with the game still very much in the balance in the final ten minutes.

But the winning score line the home supporters wanted didn’t materialise, as Sale held on to run out 21-13 victors.