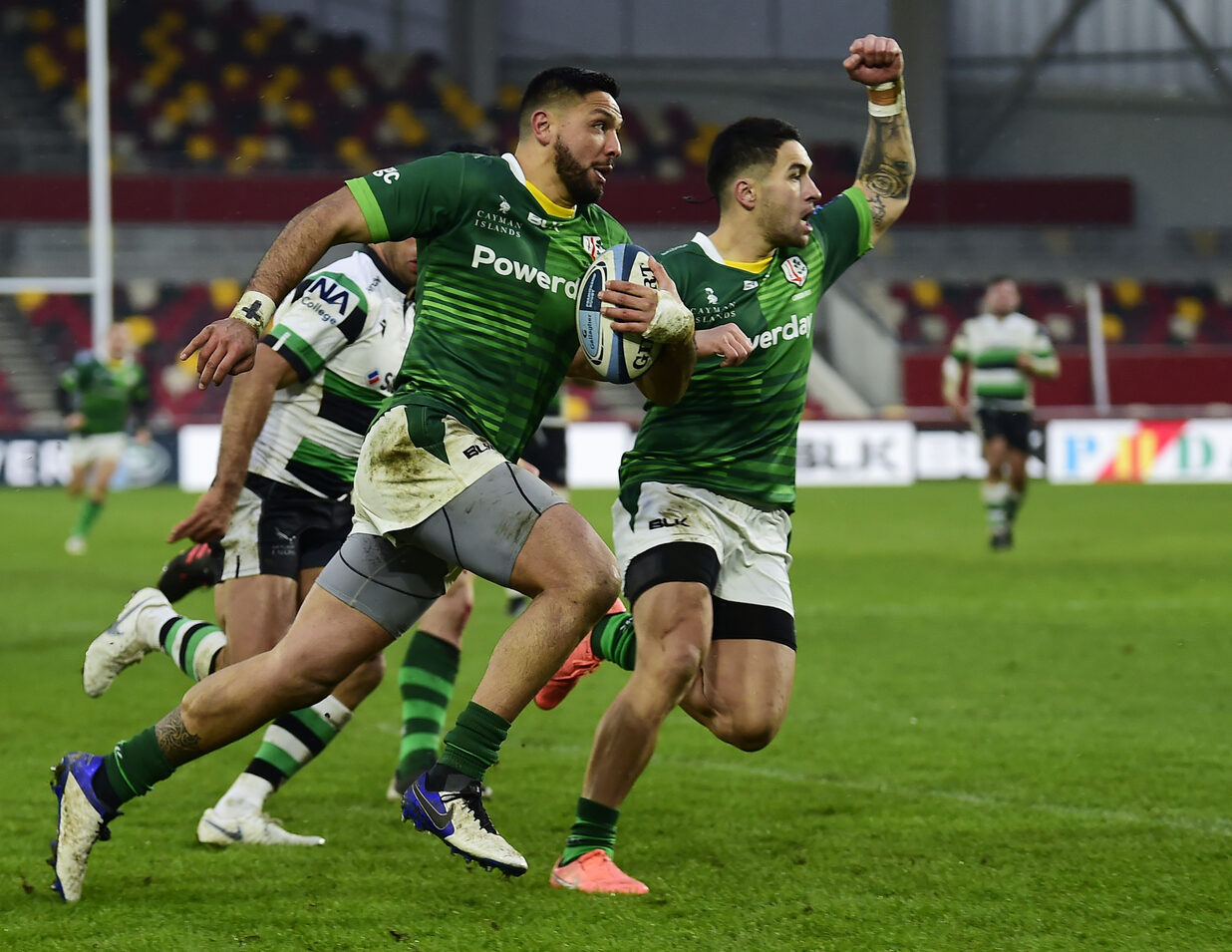 London Irish secured a bonus-point victory thanks to a fantastic all-round team display against high-flying Newcastle Falcons at the Brentford Community Stadium.

Irish were made to wait until the final day of January to play their first home match of 2021 at the Brentford Community Stadium.

With COVID-19 disrupting the previous two weeks of European action, in-form Newcastle were the visitors to the capital as the Gallagher Premiership resumed.

On a freezing afternoon in West London, Irish’s pack won an early scrum against the feed, before possession swung to-and-fro for an extended period.

The Falcons threatened as the half approached the quarter hour mark – and they should have been rewarded on 14 minutes, only for Joel Hodgson to miss a relatively straightforward penalty chance from inside the 22.

Buoyed by their reprieve, Irish were soon back on the attack – and the games first try duly followed.

A perfectly-executed rolling maul resulted in Creevy crashing over, with Paddy Jackson kicking the extras to hand the hosts a 7-0 lead midway through the first half.

Irish were being forced to call on all their defensive capabilities as the half evolved, time and again producing mammoth efforts in the loose to prevent Newcastle from making any significant inroads.

And that hard work paid dividends with the clock ticking towards the half hour mark – when Irish scored a sensational team try.

Jackson was the architect on halfway, exchanging passes with Billy Meakes, before feeding Tom Parton. With one man to beat, he timed his offload to perfection, and Stokes – only named in the starting XV an hour before kick-off in the wake of an injury to Ollie Hassell-Collins – did the rest, hanging in the air for what seemed like an eternity before touching down acrobatically in the corner for a quite incredible score.

Jackson, from the touchline, slotted over the conversion, to make it 14-0.

Newcastle, as you’d expect from a side in such fine form, refused to lie down and they scored their first points of the contest on 36 minutes, when – from a sustained period of possession deep in the Irish 22 – the ball was eventually slung wide to Ben Stevenson, who darted over in the corner.

Irish were forced into a change shortly before half-time, with Sekope Kepu replaced by Lovejoy Chawatama, on for his 50th appearance in an Exiles jersey.

The Falcons were awarded a penalty on the stroke of half-time, which Hodgson kicked, to narrow the gap to six, as Irish went in 14-8 up at the break.

It was a relentless half of rugby, with neither side giving an inch.

Terrence Hepetema entered the fray at the start of the second half for his first appearance of the season following a wrist injury, replacing Meakes.

A kicking contest ensued at the start of the half, with Irish and Falcons each opting to punt for territory, before both sets of players were finally able to catch breath, when a late challenge on Parton – following another kick upfield – resulted in an Irish penalty, and ten minutes in the sin bin for full-back Tom Penny.

Jackson stepped up to kick the resultant penalty, from just outside the 22, making no mistake, to maintain his 100 per-cent record with the boot.

Jackson was enjoying a fine afternoon with the boot – and his next kick, from inside his own half, led to a third Irish try.

Stokes arrived in the nick of time to latch onto the Irishman’s deft punt forward and when Parton latched onto his pass and offloaded to Rona, the Australian continued his incredible try-scoring form with a fourth of the season.

Jackson added the conversion, to make it 24-8, as the clock ticked towards the hour mark.

Both sides had used the majority of their quota of changes with 15 minutes to play, as the driving rain hit the Brentford Community Stadium, making conditions even more testing for both sets of players.

Newcastle weren’t about to lie down though, and with 71 minutes on the clock, replacement Sam Stuart – following phase after phase of possession – nudged over, with Hodgson kicking the extras.

The Falcons were growing stronger and stronger as the game progressed and they set-up a grandstand finish when Gary Graham scored, with Hodgson converting, to make it a two-point game with only a matter of minutes remaining.

But this Irish side are made of stern stuff and the victory they fully deserved was sealed two minutes from time when Motu Matu’u made sure of a bonus-point victory with a try, with Jackson – who else – having the final say with the boot, to secure a 31-22 victory!