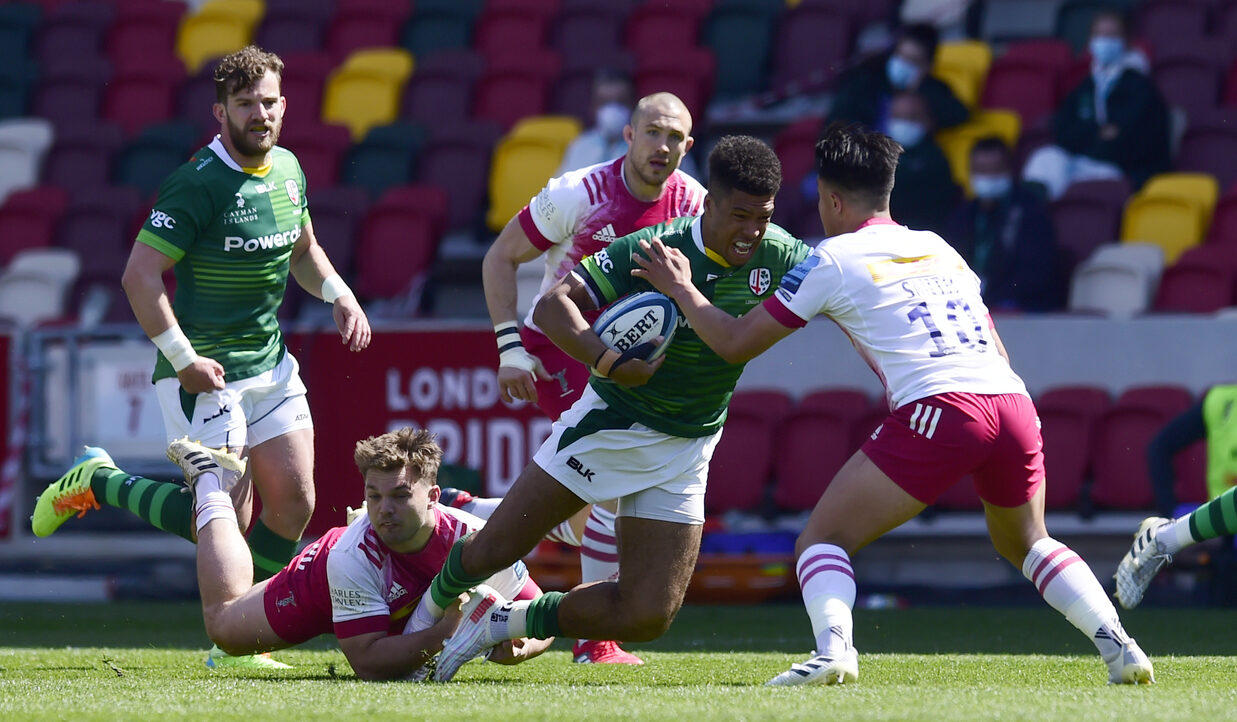 London Irish fell to an agonising defeat against Harlequins at the Brentford Community Stadium, going down 25-21 in a thrilling Round 17 encounter.

Marcus Smith’s last-minute try proved to be the difference as Quins got over the line with the final play of the game to secure a narrow victory.

On a stunning Saturday lunchtime in the capital, the early exchanges swung to and fro from end to end.

Both sides conceded penalties in that period – but the first one of note in a kickable position fell to Irish, and Paddy Jackson slotted over from just inside the 22 to hand the hosts a tenth minute lead.

Quins responded well, forcing Irish deep into their own territory, but the Exiles dealt with the threat, with Mike Brown adjudged to have come up just short in his pursuit to get the ball over the whitewash.

Irish extended their advantage midway through the half – Jackson making no mistake with the boot to make it 6-0, after Quins were penalised at a scrum.

The visitors continued to ask questions as the half evolved – and they were rewarded on the half hour mark when Brown crashed over from close range, with Marcus Smith adding the extras.

Smith added a penalty five minutes later, to edge Quins into a 10-6 lead, but Irish responded just over a minute later, Jackson slotting home a three-pointer of his own after the visitors were penalised for their continuous overzealous orchestrations to the officials.

You sensed the final score of the half was always going to be key, and unfortunately for Irish, it was Quins who got it – Caden Murley sprinting over in the corner to make it 15-9 with the final play of the half.

Undeterred, Irish started the second strongly, putting Quins on the back-foot early on.

Eight minutes into the half, the visitors were reduced to 14 men, when Andre Esterhuizen was giving his marching orders for an elbow to the face on Curtis Rona.

The numerical advantage paid dividends almost immediately, with James Stokes and Rona combining to set up Loader, who turned on the afterburners to score in corner. Jackson added the extra two, to put Irish back in front.

Quins, to their credit, bounced back four minutes later, Smith nudging over another penalty, as the game continued to ebb and flow.

Irish would score next though – and it was a try right out of the top drawer.

Breaking from deep inside their own half, the Exiles got well over halfway, before Blair Cowan and Tom Parton sliced through the Quins backline, teeing up Hassell-Collins to dot down in the corner.

With just three points separating the sides heading into the final five minutes, nerves were on a knife-edge in both camps.

And the drama was saved to the final moment of the match, as Smith scored under the posts and then added the conversion, to break Irish’s hearts.

It was a thrilling encounter – but not the result Irish craved.

Rest up, re-coup and we go again at Newcastle in a fortnight’s time.