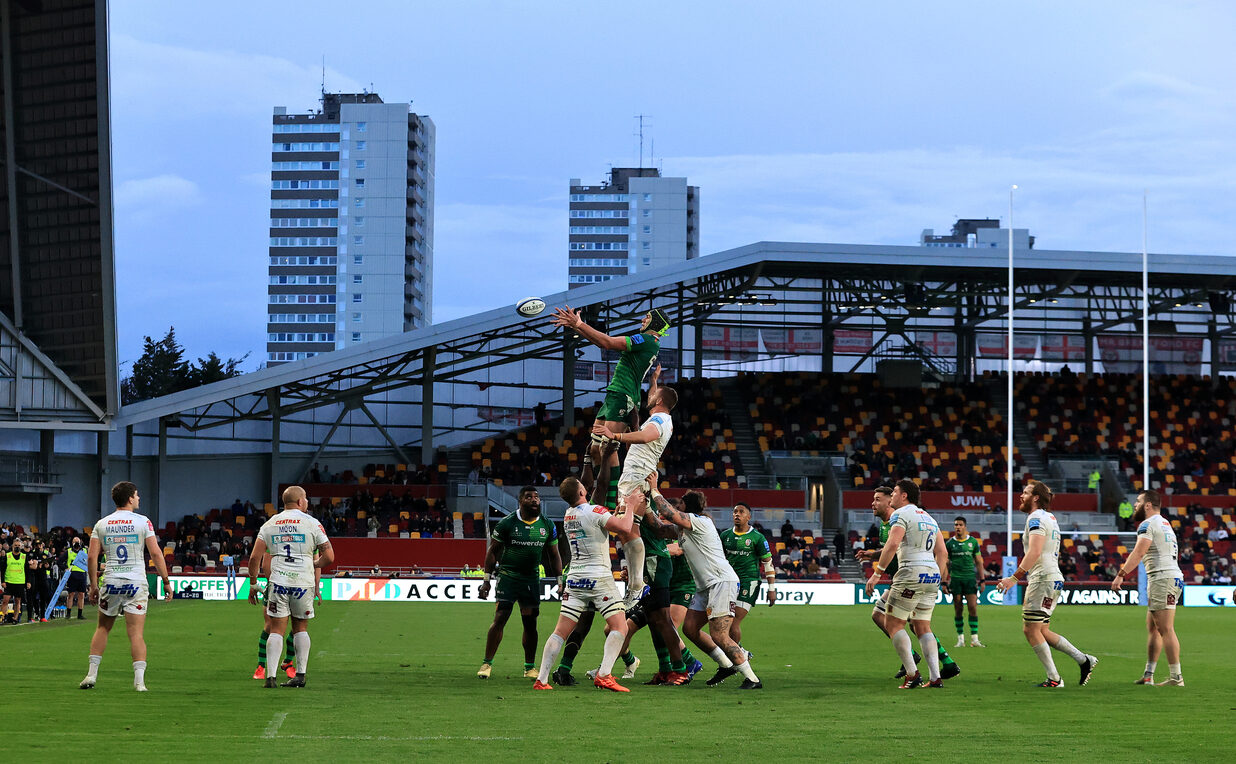 The final scoreline might not have been the one the returning Exile Nation craved, but the majority of the 3,988 crowd in attendance would have left the Brentford Community Stadium proud of Irish’s efforts.

Despite going down 31-12 to reigning European and domestic champions Exeter Chiefs – with Sam Simmonds’ bagging a hat-trick of tries for the visitors – Declan Kidney’s side gave absolutely everything in a keenly-contested Round 19 clash in west London.

On a cool May night, the roar of the crowd greeting the teams as they took to the pitch was a joy to behold, after six months of behind-closed-doors fixtures.

That joy for the Irish supporters was short-lived, however, when – after an even opening – Sam Simmonds crashed over for a seventh minute try, despite a lengthy TMO.

His brother Joe added the extras, to make it 7-0 early on.

Undeterred, the Exiles responded six minutes later with a try of their own. After a number of phases of possession deep in Chiefs territory, Ben Donnell – after another TMO, that this time perhaps owed as much to the orchestrations from the Irish crowd than anything else – went over, with Paddy Jackson adding the conversion to level proceedings.

The scores were coming thick and fast and midway through the half, Joe Simmonds spotted a gap in midfield, racing clear to touch down in the corner and restore the Chiefs lead.

Play was flowing from end-to-end now, with the heavy pre-match rainfall leading to one or two unforced errors, resulting in quick counters.

Sam Simmonds – as he has been all season long – was a constant threat, and he touched down for his second and the visitors’ third try on 25 minutes.

Irish were firmly up against it, but to their credit, they continued to ask questions of their own – and they were rewarded with a quite brilliant try on 31 minutes.

Jackson’s deft kick over the top was perfectly-weighted for the onrushing Ollie Hassell-Collins, who expertly offloaded the ball to Ben Loader to crash over the line. It was a stunning score – and the noise as the winger touched down was something special too. Wow!

That proved to be the final score of an enthralling half, with Exeter holding a narrow 19-12 advantage at the break.

The second period continued at an equally frenetic pace, but disaster struck for Irish eight minutes into the half when Tom O’Flaherty seized on a moments hesitancy from Loader to dot the ball down.

O’Flaherty was soon on the sidelines, however, shown a yellow card for taking Tom Parton out in the air.

With the numerical advantage, Irish went on the front foot immediately, with Jackson’s crossfield kick met by Parton, who – in mid air – unfortunately knocked on with the try-line at his mercy.

Genuine clear-cut chances were few and far between for either side though, and with the clock ticking down, Irish had it all to do, trailing by 12 with ten minutes to play.

The next score was always going to be crucial and it was Exeter – and that man Sam Simmonds again – who got it nine minutes from time, diving over in the corner to cap a masterful individual performance and seal the visitors’ victory.