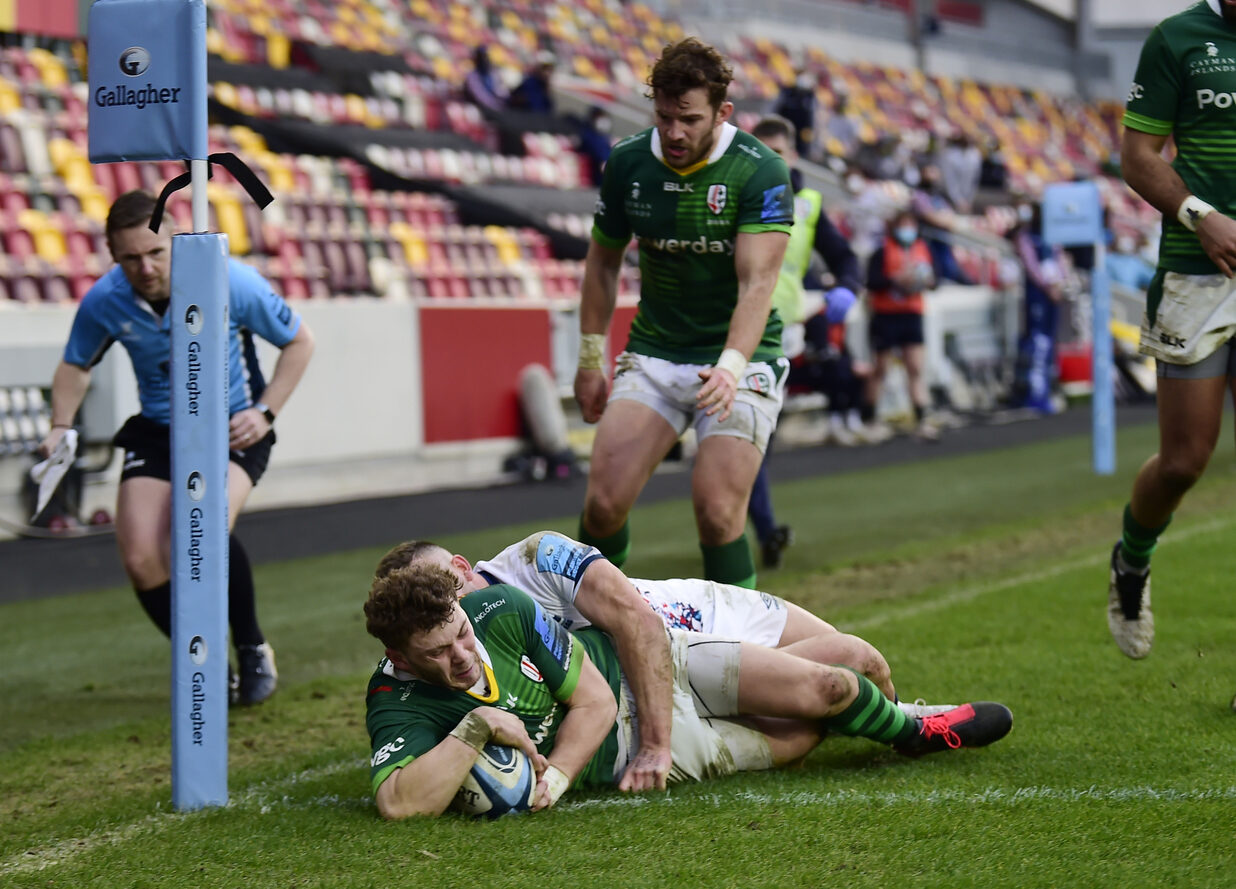 London Irish produced the kind of second half comeback you could only ever really dream about – to clinch a remarkable share of the spoils against table-topping Bristol Bears at the Brentford Community Stadium on Sunday afternoon.

A sensational second half fightback saw Irish, trailing 31-13 at the end of an extraordinary first half, score three unanswered tries to draw 34-34 in a game that had just about everything!

On a mild February afternoon, Irish were on the front foot early on, with an excellent move in midfield seeing Theo Brophy Clews break through the Bears back line.

The hosts were rewarded with a penalty soon after, which Paddy Jackson struck over, but not before Bears’ centre Sam Bedlow was sent to the bin, via the TMO, for a tip tackle on Brophy Clews.

Leading 3-0, the Exiles were straight back in the ascendancy from kick-off, only for an interception to gift the Bears a try, with Piers O’Conor finishing off – and Callum Sheedy adding the extras.

Remarkably, the Bears scored again moments later – another interception, this time with the Exiles camped deep in the Bristol 22 – gifting Siva Naulago a free run from inside his own half.

Sheedy again added the conversion – and a penalty soon after – to leave Irish with it all to do, trailing 17-3, with the visitors back to their full complement of players, with only 11 minutes on the clock!

It was a rip-roaring game, with play swinging from one end to the other, and both sides giving absolutely everything.

Irish were awarded another penalty on 25 minutes, which Jackson – from in front of the posts – fired over with ease.

But the all-important next try of the game would go the way of the visitors eight minutes before the break, with Chris Vui crashing over under the posts, and Sheedy adding the extras, to extend Bears’ lead.

The visitors were in full flow now and another free-flowing move ended with Naulago crossing for this second – and the Bears fourth – try of the contest.

Irish, to their credit, responded with a try of their own just before the break, thanks to Steve Mafi, who picked from a ruck and brushed off two tackles, before diving over. Jackson added the conversion, but Irish trailed 31-13 at the half.

Buoyed by that score just before the break, Declan Kidney’s side returned with renewed vigour at the start of the second half.

Try-scoring opportunities, however, remained few and far between for either side, in fairness, as the clock ticked towards the 55 minute mark.

Ben Loader was sent to the sin bin for a deliberate knock-on in the 57th minute, and from the penalty, Sheedy made it 34-13.

It was 14v14, temporarily, when Mitch Eadie received a yellow card for a shoulder barge off the ball on Irish replacement Nick Phipps.

Brophy Clews got the try his performance undoubtedly deserved with 16 minutes to play, when a strong phase of Irish possession, involving Mafi and Sean O’Brien, ended with the centre diving over in the corner. Jackson kicked the conversion from the touchline, to make it 20-34 with a quarter of an hour to play.

Irish were not done yet, and with Loader back on and the Exiles with the man advantage, the hosts – inspired by a terrific run from replacement Tom Parton – scored again. After quick ball, Phipps went in under the posts, with Jackson converting, to make it 27-34 and set up a grandstand finish.

Remarkably, there was still time for one last twist – when Parton darted over following an outstanding passage of Irish attacking play, with Jackson converting, to level the scores.

It was so nearly a fairytale ending, the like which you'd rarely ever see, when a 3-on-1 to Irish out wide presented another glorious chance, but this time the ball was knocked on, denying the Exiles the chance of what would have been the mother of all comebacks.

Still, having trailed 31-13 at the break, the draw will do. On to Wasps next weekend.