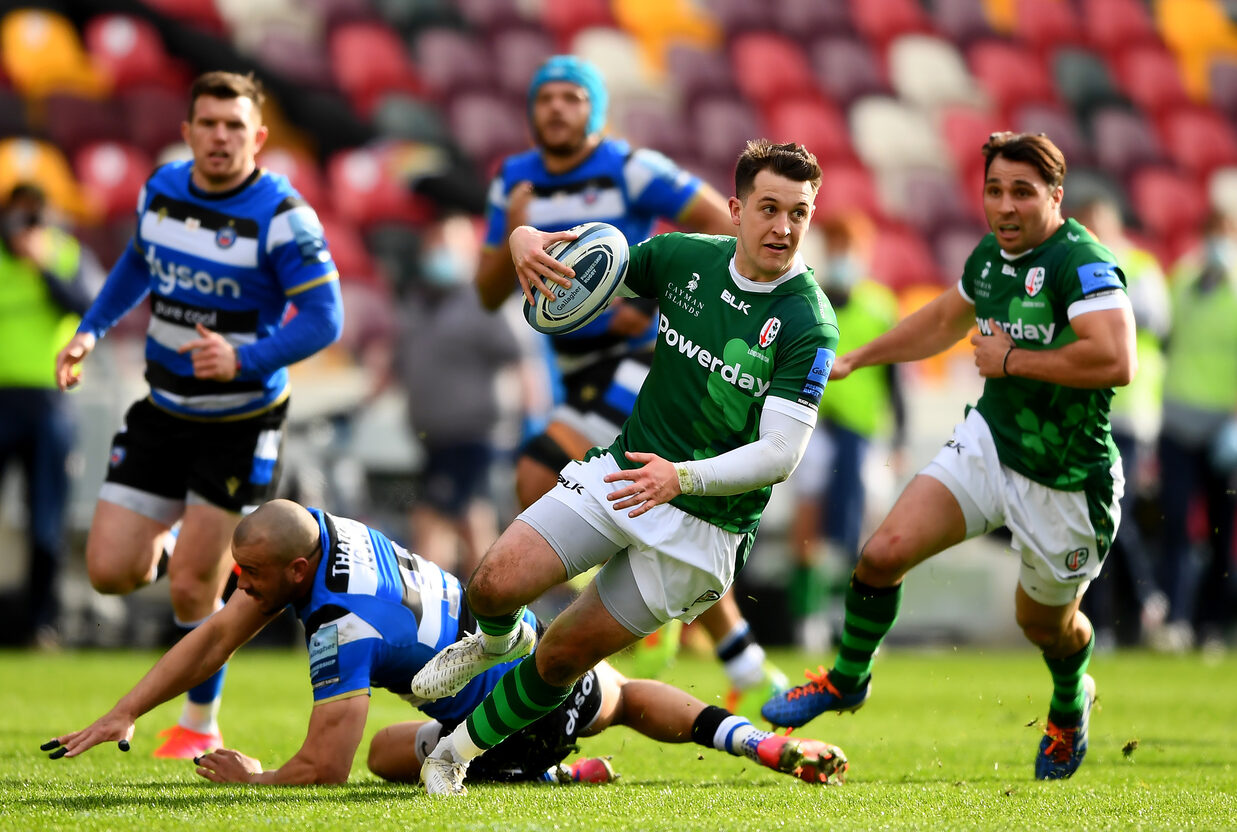 The Exile Nation may have been missing, but London Irish put on a show in their annual St Patrick’s Party fixture at the Brentford Community Stadium, seeing off Bath Rugby in an absolute classic!

In a fixture that just about had it all – nine tries, two red cards, a handful of yellows and everything else you could imagine in between – Declan Kidney’s side triumphed 36-33 at the end of a pulsating encounter.

It was a chaotic start at the Brentford Community Stadium– with the ball in play for the lion’s share of the opening five minutes, as both sides seemed intent on throwing the ball around.

Bath were enjoying the better of the opening exchanges though and they were rewarded in the eighth minute, with Will Muir dotting down after a sustained period of play – Ben Spencer adding the extras.

Irish were on the front foot from the restart, however, and when Bath were penalised for failing to roll away from a tackle, Paddy Jackson made no mistake with the boot to reduce the buffer.

The visitors’ seven-point advantage was quickly restored though – with Spencer, having missed an earlier opportunity, slotting home a left footed penalty of his own on 16 minutes.

Bath were reduced to 14 men midway through the half, when captain Charlie Ewels was sin binned for a high tackle on Ben Loader. The TMO took a long look at the collision in midfield, opting for a yellow card instead of a red, after a lengthy deliberation.

With the numerical advantage, Irish kicked for the corner – and a couple of phases later, they were level.

After twice going close, Ben Loader eventually jinked over, leaving three Bath players trailing in his wake, to dot down for his first try of the season.

Jackson kicked the conversion from in front of the posts, to make it 10-10.

Bath regained the lead a couple of minutes later, Spencer slotting over a penalty, with Irish adjudged to be offside.

Play continued to swing from one end to the other, and on 31 minutes, Irish took the lead for the first time.

Tom Parton provided the platform for the score – his incredible solo run making fully 40 metres – before offloading the ball to Ollie Hassell-Collins. With numbers out wide, Irish quickly recycled the ball out to the left wing, where Matt Rogerson crashed over.

Jackson, from the touchline, added the extras with a stupendous strike, to give the Exiles a four-point advantage.

The Irishman had another shot at goal with the final kick of the half, but this time his effort flew narrowly wide.

Bath started the second half on the front foot, scoring inside two minutes – Anthony Watson crashing over under the posts, with Spencer adding two with the boot to make it 20-17 to the visitors.

Spencer increased Bath’s lead to six with another penalty ten minutes later, but Irish bounced back with a terrific score of their own soon after.

Breaking from inside their own 22, replacement Sean O’Brien was involved twice – and after taking Irish beyond half-way, he played the all-important final pass to Parton, who turned on the afterburners, jinking outside before diving under the posts.

It was a fine team try – and Jackson, from in front of the posts, added the conversion.

Bath’s Tom Dunn was shown a red card soon after, with an off-the-ball elbow to the face of Agustin Creevy – and Irish were soon making their numerical advantage count yet again.

From the resultant period of play, Loader was in the right place at the right time to meet Jackson’s looping long pass, to score his second try of the afternoon in the corner. The imperious Jackson notched yet another conversion from out wide, to make it 31-23 to the Exiles!

It went from bad to worse for Bath a minute later, with Muir seeing yellow for taking out Rob Simmons in the air – and remarkably, it got even worse for the visitors within 60 seconds, when Ewels was shown a yellow card, his second of the game, and was dismissed, reducing Bath to 12!

It was a thankless task for the visitors, and when Irish wrestled the ball back from a knock-on in their own 22, the Exiles made the most of their numbers out wide. Loader, Parton and Theo Brophy Clews exchanged passes, before Curtis Rona dived over in the corner!

Jack Cooke was shown a yellow card moments after being introduced for dragging down a rolling maul – and Bath scored from their next attacking foray, Josh McNally diving over.

Ben Donnell was next in the sin bin, leaving Irish down to 13, and when Jack Walker crashed over for the visitors, it was a three-point ball game.

Bath won a penalty late on, but when their kick failed to find touch, it was left to Parton to bring an incredible game to its conclusion, kicking the ball into the stands, to ensure Irish held on for a quite incredible win!

That one was for you Exile Nation – and a belated happy St Patrick’s Day from all of us. We can’t wait to celebrate with you properly next year!