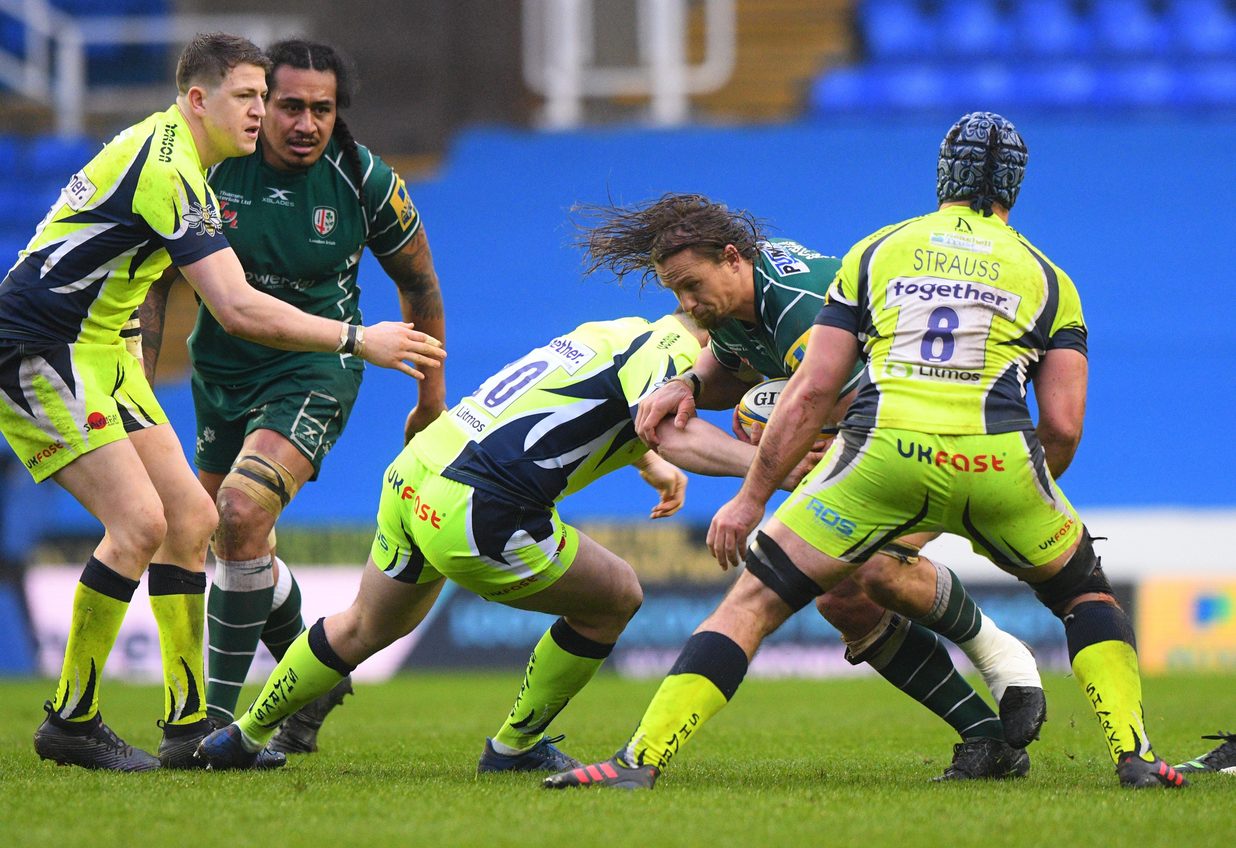 London Irish picked up a losing bonus point against Sale Sharks in the Aviva Premiership, the Exiles edged out 13-9 at a wet and greasy Madejski Stadium.

A Josh Strauss try on 29 minutes put Sale in the ascendancy going into the break, with Irish having to overturn a 10-3 deficit in the second half.

There was no lack of endeavour from the Exiles as they foiled a number of Sale attacks, while also going on the offensive in the latter stages of the contest as they went all out for the win.

Nick Kennedy’s men, who came into the contest on the back of four straight victories, now gear up for next Saturday’s trip to Northampton Saints before hosting Worcester Warriors on Sunday 25 February (kick-off 3pm).

Sale were 0-3 up inside four minutes, Faf De Klerk slotting home a penalty via the post after Irish were penalised for an infringement at the breakdown. The penalty came hot on the heels of a period of sustained pressure on Irish’s line, with Sale leaving the Exiles’ 22 with points to show for their efforts.

The Greater Manchester club increased their lead just short of the half hour mark courtesy of Strauss, who burrowed his way to the whitewash. De Klerk’s conversion stretched Sale’s lead to 0-10.

Tommy Bell replaced Theo Brophy Clews on 28 minutes, the fly-half having to go off for a head injury assessment. And within six minutes of his introduction, Bell kicked a penalty to take him over 100 points for the season and the scoreline to 3-10.

The second half began in frantic fashion, Exiles’ Arno Botha and David Paice continuing to hit the hard yards in testing conditions. Sale thought they had chalked up their second try of the afternoon on 56 minutes when rugby league convert Josh Charnley was ruled to have fumbled the ball over the line.

Bell, who slotted in at full-back with James Marshall moving to fly-half, cut the gap to four points to set up an enthralling final quarter. However, De Klerk restored Sale’s seven point advantage on 62 minutes following a high tackle from Ofisa Treviranus. Bell notched up his third penalty success nine minutes from time, meaning a London Irish try would be enough for the win. The likes of Petrus Du Plessis, Harry Elrington and centre Tom Fowlie looked to puncture holes in Sale’s defensive line in the closing stages, but the visitors held on for a narrow win.