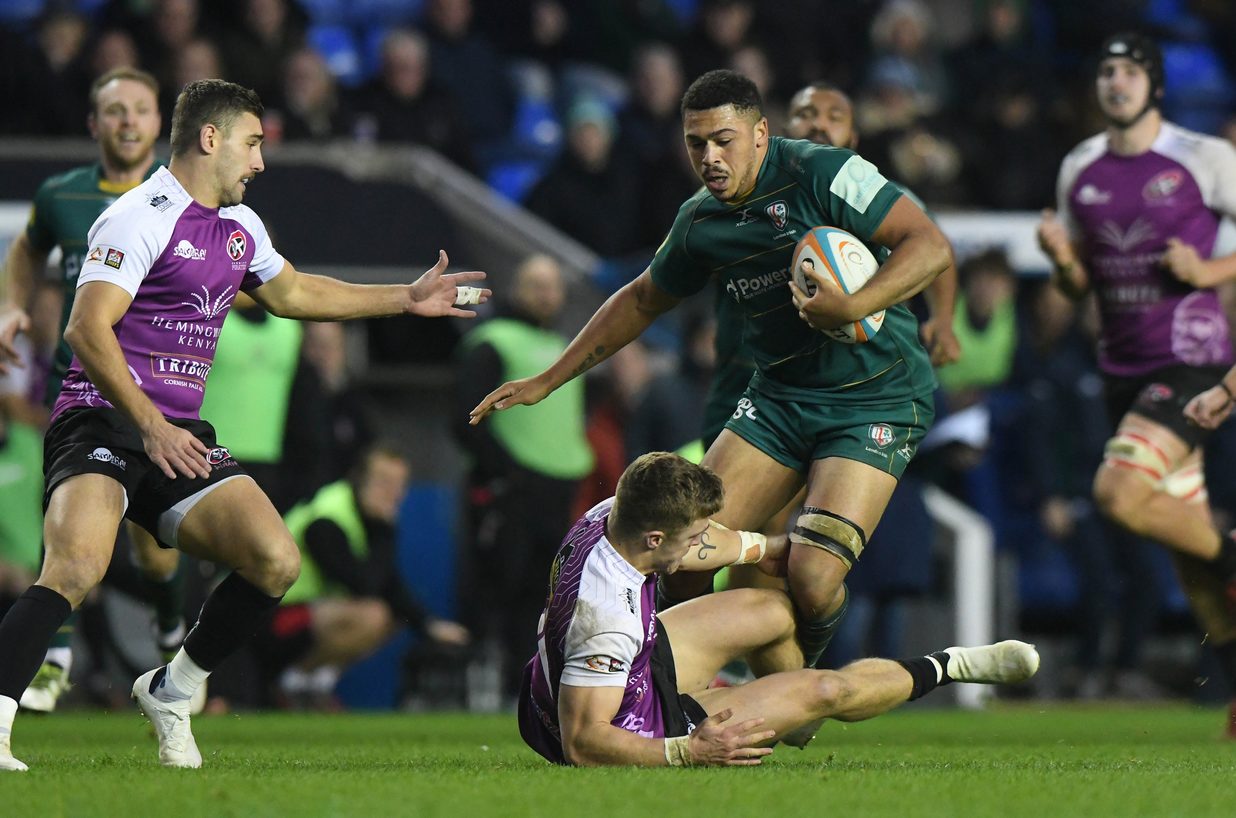 London Irish made it two bonus-point wins out of two in the Championship Cup, as the Exiles ran in nine tries to secure victory over Cornish Pirates.

Led out by centurion scrum-half Scott Steele, the Exiles got off to a steady start thanks to the boot of fly-half Stephen Myler. The Pirates were punished after an infringement at the breakdown and Myler kicked the home side into a 3-0 lead.

After a cagey battle for possession, Irish looked to add to their lead thanks to a clever grubber kick from flanker Max Northcote-Green but, winger Ben Loader was unable to get to the ball in front of the rushing Pirates defence.

The first try did come, in the form of a rampaging Chawatama. The charismatic prop sprinted clear to touch down after a powerful break from Nalaga. Myler added the extras from in front of the posts and took the hosts lead to 10-0 on the 15 minute mark.

London Irish academy graduate Tom Fowlie jumped onto the end of a well-worked move to dot down for Irish’s second try of the match after 20 minutes of play. Myler again slotted the conversion to extend the lead to 17-0.

Undeterred by the hosts start, the Pirates hit back with an attacking passage of their own. The Penzance side peppered away at the Irish defence but were stopped in their tracks by debutant Terrance Hepetema with a crunching tackle.

On the half hour mark, Irish were reduced to 14 men after back-row Jake Schatz was shown a yellow card for illegally slowing down the Pirates attack.

Two minutes later, Pirates made the extra man count as winger Alex O’Meara slid over in the corner to cut Irish’s lead. Fly-half Javier Rojas Alvarez converted from out wide to cut the deficit to 17-7.

The home side fought back thanks to a clever break from Steele. The tenacious scrum-half broke clear of the Pirates defence before putting Greig Tonks one-on-one with the last defender. The former Scottish international stepped around the last man to extend the Exiles lead. The trustworthy boot of Myler was true to form and Irish’s lead moved to 24-7.

Tenacious defensive work from Ollie Hoskins earned the home side a turnover and a chance to get to the half-time break with a 24-7 lead.

Pirates started the second half strongly and were rewarded with a penalty in front of the posts. Rojas Alvarez slotted the penalty to make the score 24-10.

The Pirates penalty acted as a wake-up call for the Exiles as they applied pressure of their own thanks to a dominant scrum. A flurry of penalties resulted in referee Alexander Thomas awarding a penalty try on the 48 minute mark, taking the score to 31-10.

With 54 minutes gone, it was the Pirates turn to be reduced to 14 men. Centre Harry Strong was sent to the sin bin after replicating the previous Schatz infringement.

Three minutes later, Ollie Hoskins extended the lead after pushing his way over from close range. Myler’s conversion was successful and the score moved to 38-10.

Just one minute later, Loader latched onto a clever kick through from fellow England under-20 international Matt Williams to get himself on the scoresheet. Much to the delight of the crowd, Myler continued his form and kicked home the conversion to make the score 43-10.

As the clock reached the 65 minute mark, flanker Northcote-Green grabbed the last pass of a well worked move to dash over the Pirates line. With his last involvement of the match, Myler nailed the conversion to take his tally to seven out of seven.

Replacement Jacob Atkins wasted no time in getting involved and stripped a Pirates attacker metres from the Exiles line, no doubt a try-scoring opportunity denied by the young fly-half.

The visitors were undeterred by the scoreline and refused to give up. After 76 minutes, replacement front-rower Marlen Walker crashed over the hosts try line. Rojas Alvarez reduced the lead to 52-17.

Turning on the style, Irish scored on the back of a rolling maul with Jake Schatz getting the rewards for a great forwards display. Atkins took over the kicking duties and increased the lead to 59-10.

Moments later, Nalaga jumped on the back of another commanding rolling maul to dot down for the final score of the match. With Atkins unable to add the conversion from the touchline, Irish ran out 64-17 winners.