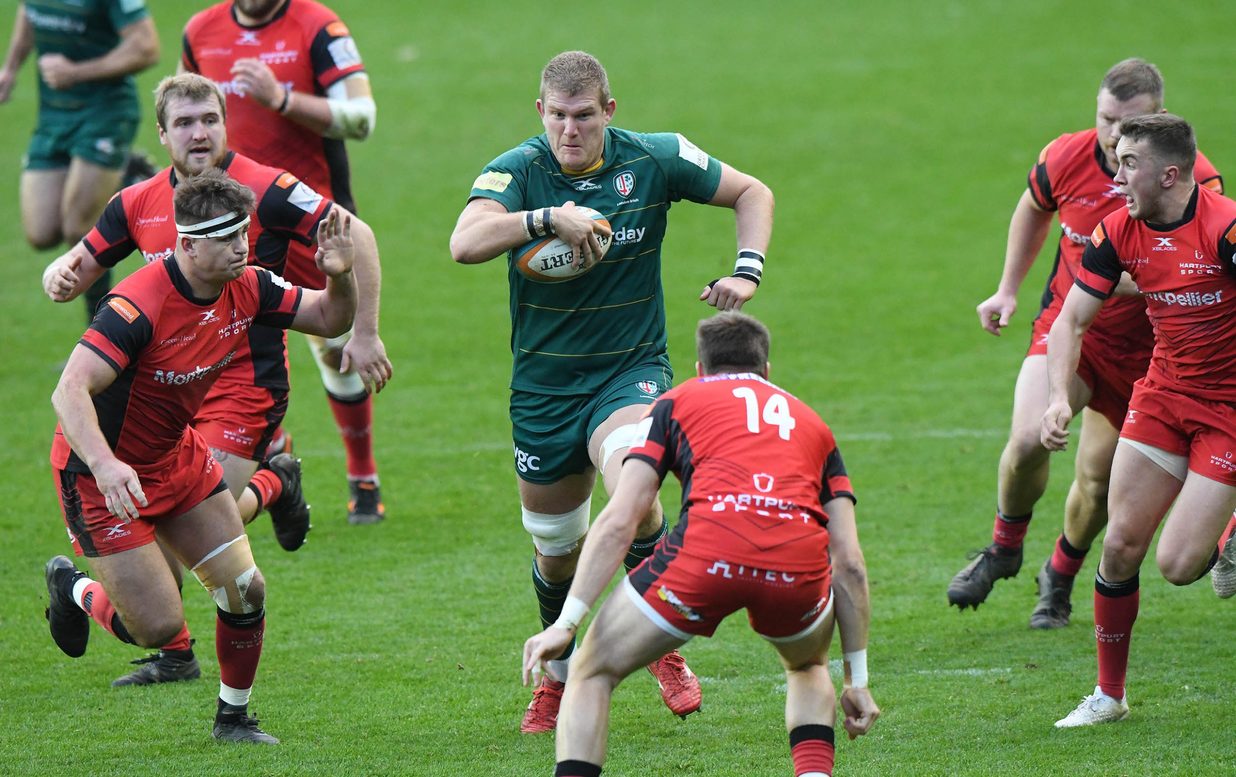 London Irish confirmed a home Championship Cup quarter final with an emphatic win over Hartpury at the Madejski Stadium.

Head Coach Les Kiss had asked for a fast start from the team, and he got what he wanted as the Exiles immediately went onto the front foot. Topsy Ojo won a Scott Steele box kick, Fergus Mulchrone sent a good kick ahead into the visitors’ 22, and from the lineout Ofisa Treviranus continued his strong running form from Bedford with a charge that was ended just shy of the line.

The forwards set their stall out with a powerful maul and scrum, and there was a scything Matt Williams break which brought the crowd to life. All of these had come within the opening three minutes, and already it seemed only a matter of time before a try would be forthcoming.

So it proved, Dave Porecki coming up with the ball from a driving maul in the fifth minute.

The same tactic paid dividends five minutes later, this time Ollie Hoskins the scorer, but while it was forward power that brought the score it was pace and awareness that set up the position, Porecki collecting an overthrown Hartpury lineout to race 40 metres upfield deep into the visitors’ territory. Barney Maddison took play on, and when Steele was tackled by an off-side player the ball was sent to the corner for the pack to do the rest.

Irish looked in the mood to play, and some lovely interplay on the right wing came within a final pass of a third try, the ball hitting the deck at the crucial moment. But there was no such error in the next green attacking wave, Mulchrone finding Steele intelligently with an inside ball after breaking through the defensive line and drawing the final man.

There was more of the same from Ojo and Greig Tonks to set up Luke McLean’s bonus point try at the end of the first quarter. A scrum penalty was sent to touch, and when the ball came quickly out wide Ojo came off his wing to make the extra man and create the opportunity for McLean to finish.

The opening four tries had been team efforts, but score number five was down to Williams’s strength and pace, the centre powering through five attempted tacklers to go into the clear and diving over.

Irish had been dominant on the way to a 31-0 lead before the half-hour. But Hartpury had shown in the reverse fixture that their pace deserved respect, and when winger Tom Seabrook’s dancing feet and neat grubber took his team to within sight of the line the visitors had the position to set up some serious pressure for the first time in the game.

Penalties for a high tackle and coming into the side of a maul were both sent to the corner, but the visitors were not able to convert this into a score. Instead it was Porecki who finished the half as he had begun it, diving over for his second try of the day, and with Jacob Atkins landing his fourth conversion the hosts headed into the changing rooms 38 points to the good.

Hartpury came out of the sheds rejuvenated by a couple of changes, and they began the second half looking to create holes in the home defence. But the Exiles were not fooled by the dummy runners, staying alert and patient without the ball and eventually winning a penalty when a Hartpury offload went to an offside player.

A couple of penalties later and Irish were again powering over the line, Porecki only denied his hat-trick score by the ball coming loose at the point the maul went past the whitewash.

The pressure was relentless, however, and with Seabrook seeing yellow for a dangerous tackle and repeated forward charges sucking in the defence it was only a matter of time before enough space was created for a score, McLean eventually going over for his second try in his final act of the day.

There was no denying Porecki in the 55th minute, the hooker keeping full control of the ball all the way to the floor in yet another maul, and when Mat Gilbert was stopped in his tracks by a shuddering hit in the Irish 22 the hosts quickly turned defence into attack.

Ojo took play into the visitors’ half, Paddy’s Whiskey Man of the Match Mulchrone came onto the ball at pace, and his nice offload put Bryce Campbell over unopposed.

The result was way past being in doubt, but Hartpury kept going and broke their duck through Mike Wilcox five minutes into the final quarter.

Although the action maintained its pace and intensity, and both sides continued to show intent, that was the final score of the afternoon and the Exiles will head to Penzance next week in good spirits.