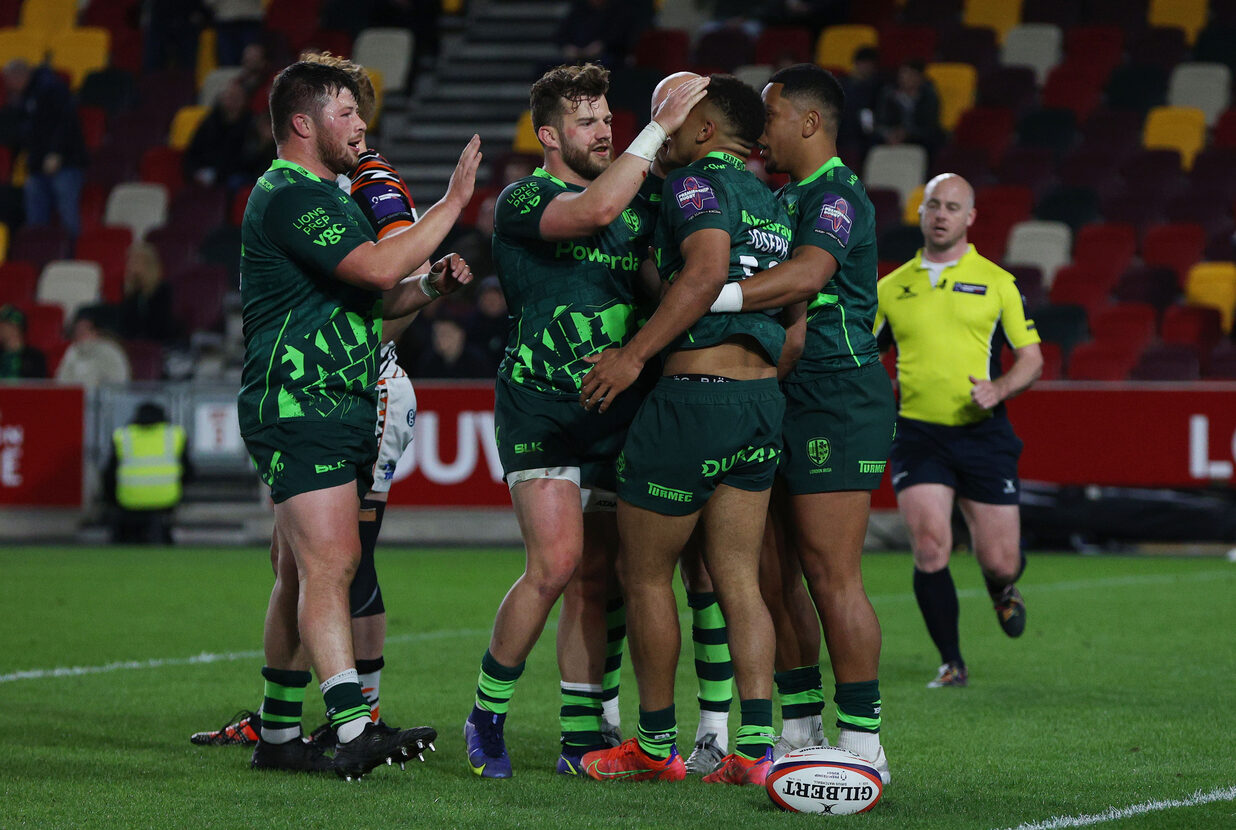 Declan Kidney’s London Irish made history this evening as they progressed to their first cup final as a Premiership side in 20 years with a thumping 59-20 win over Leicester Tigers in the semi-final of the Premiership Rugby Cup.

The Irish Globetrotters ran riot once more and treated the Exile Nation to 59 more points, 101 in the space of five days, with nine tries in total for the home team.

Henry Arundell and Albert Tuisue eached scored the first of their braces in the opening forty, added with efforts from Noel Reid and Ben Donnell.

The box-office full-back and eight helped themselves to more on an evening of plenty for Irish, complemented with more tries from James Stokes, Lucio Cinti and Will Joseph on a perfect night for the Boys in Green.

Jack van Poortvliet’s troublesome box-kicking caused issues for Irish in the opening four minutes, including a 50:22 kick, but a vital lineout steal from Jack Cooke took the pressure off the Exiles.

Bryce Hegarty kicked Tigers into an early lead from the tee and Irish were in need of a foothold in the affair as the first 10 minutes drew to a close.

Henry Arundell, one of the most promising prospects from behind the scenes at Hazelwood, was the man to hand Irish their first lead of the game after some fluid offloads involving James Stokes and Will Joseph before Arundell was released.

The youngster found enough green to dart into but not enough to see him clear to the whitewash, instead wisely choosing to chip and chase with the first bounce falling perfectly into the full-back’s arms to touch down under the posts, giving Noel Reid little to worry about in the way of a conversion.

Van Poortvielt thought he had the ball over the try line but the ball was dropped, Irish then outdoing Tigers at the third consecutive scrum in a great defensive showing.

Hegarty missed his second placed kick after good work from Tom Cowan-Dickie at the breakdown but it was Irish who had the game’s second score.

Mike Willemse charged down Dan Lancaster’s clearance and the South African nearly had a clear charge to the line himself, only to be tackled by the retreating fly-half but Willemse managed to get the ball free.

Referee Andrew Jackson took much deliberation on whether captain Jack Cooke had touched the ball while it rolled on the floor from Willemse’s hands, but there was no evidence for such and Albert Tuisue picked up for a short run into the goal area.

Noel Reid was over for his first try in Irish colours after phases of building to the try line, smartly jinking his body inside to get the better of Tigers defenders and converting his own try in the process.

Irish were not holding back in their pursuit of cup progression, Tuisue completing his brace with a pick up off the ruck to drive over and give Irish a 20-point cushion.

The next try was no less important although perhaps dripped in a little more glamour, the Exiles turning on the style with an impressive transition from defence to all-out attack before the break.

A great breakdown clearout earned Irish back possession and the ball found itself with Lucio Cinti, who set Cooke away down the left wing but smartly passed back inside to back-row partner Ben Donnell for his first try of the season.

Tuisue wasn’t the only Exile to bag a second, Arundell was next in line with Irish operating under the ‘keeping the ball alive’ mantra as the youngster dodged his way through two members of the East Midland rearguard to finish exceptionally with one hand.

There was no stemming the green tide for Tigers with James Stokes touching down minutes later, Joseph making a searing line break to find Ben White, whose smart kick into the backfield for replacement Phil Cokanasiga was instead touched down excellently by Stokes.

Lucio Cinti completed the outside back try-umverate with another smart finish, receiving the ball from White on the blindside of a put-in to keep his balance in check and cross inside.

Hosea Saumaki’s burgeoning run looked to expose Irish down the left flank and the Tongan did well to break into the 22, but it was substitute scrum-half Sam Edwards who got Leicester’s opening try on 68 minutes after Hegarty’s penetrating break.

Saumaki and Tigers seemingly got the taste for attacking rugby and the visitors were over for their second as the Tongan backtracked and went round the outside of the Exiles defence to touch down impressively.

London Irish, and Will Joseph, had the final laugh with the final try after picking up a loose ball in midfield to saunter over to cap off a mammoth performance fitting of the stirring occasion.