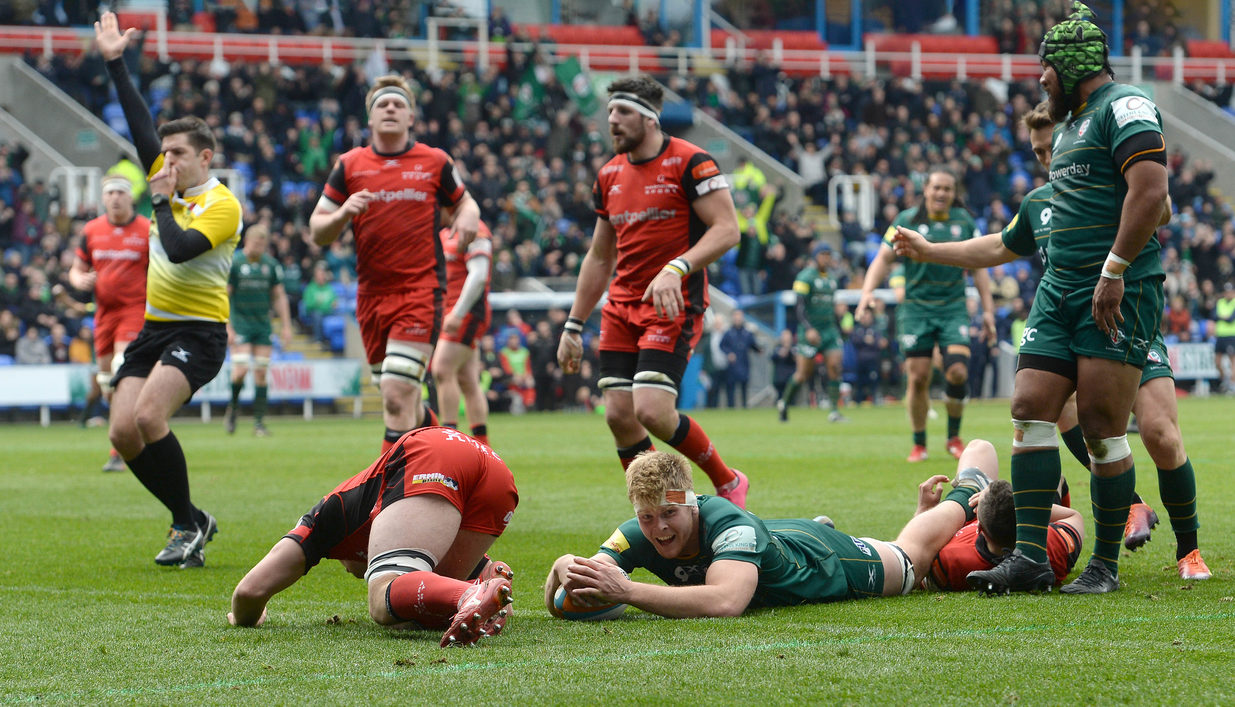 London Irish extended the run of bonus-point wins to three with a comprehensive performance against Hartpury RFC.

Despite the eventual winning margin Irish’s start was far from ideal, losing Ofisa Treviranus to a pitchside assessment and then conceding a try to Luke Stratford all within the opening three minutes.

It was an opening which stunned the Madejski Stadium faithful, but they had plenty to cheer thereafter.

Stung into action, Irish then forced themselves into a great position with some aggressive defence. A couple of penalties later they were over for a try, Ben Meehan using a free play to find Ben Loader on the outside with a floated pass.

Ian Keatley nailed the conversion from a difficult angle and the scores were tied. This was soon followed by Treviranus’s return to the action, but it was the dancing feet and swerving abilities of Alivereti Veitokani and Tom Stephenson which put Irish into their next good position.

The centre’s run brought a high tackle from a Hartpury defender, but also an unfortunate injury in the process and a lengthy stoppage. When play resumed Irish had a penalty to kick to the corner and Matt Williams on the field to mark his own return to action after a lengthy absence.

They capitalised on the opportunity, TJ Ioane coming up from the bottom of a maul with the ball and Keatley landing his second tricky conversion to make it 14-7.

Then with Hartpury struggling to adjust to losing fly-half Sam Leeming the hosts were back over the whitewash, albeit held up. Lovely handling from Ioane, centurion Fergus Mulchrone and Ollie Hoskins put the prop over, but while he was denied there was no stopping Treviranus from the resultant scrum.

Mulchrone also played a key role in try number four a minute later, his kick ahead causing havoc in the Hartpury backfield. The ball came back on the green side, and while the visitors’ defence tried to blitz, the patience in attack remained and Josh McNally cut a great line to take him all the way over.

The combination of handling, pace and power showed itself once more five minutes from the break, forwards and backs combining superbly down the left flank. Luke McLean’s grubber put Harry Cochrane onto the back foot, and while his kick found touch no one could stop Albert Tuisue going over for the fifth home score of the half.

Hartpury started the second half brightly, but within four minutes they were a further five points behind. A penalty at a scrum was kicked deep by Keatley, and when the ball came quickly to the backs McLean came off his wing to sell a dummy and put Veitokani over in the corner.

It was a superbly clinical move, but while it took Irish’s lead over 30 it also prompted Hartpury’s most concerted spell of possession since their score more than an hour of real time earlier. It was certainly their most patient period with ball in hand, and while it was largely matched by the home rearguard effort a penalty was sent to the corner and the forwards did the rest, number eight Sam Graham the beneficiary.

The scores thus far for both sides had been team efforts, but the next try was an outstanding solo highlight for the scrapbook. McLean’s floated pass to Veitokani may have given the full back man and ball, but with a 360 degree turn the Fijian was away, turning on the afterburners for his second inside 10 minutes.

A Williams interception and 30-metre sprint took Irish over the 50-point mark as Hartpury tried to play from deep. But with 10 minutes to go the hosts found themselves under immense pressure on their own line and two men in the bin, Lovejoy Chawatama and McNally following each other off the field in quick succession after being ruled to have illegally brought down Hartpury mauls.

The visitors were held up, too, and when Hartpury came again the defence held firm, stripping the ball over the line to win a 22. And this effort was rewarded in stunning style at the other end of the field by Williams, who was put over by back-of-the-hand passes from both Veitokani and Mulchrone.