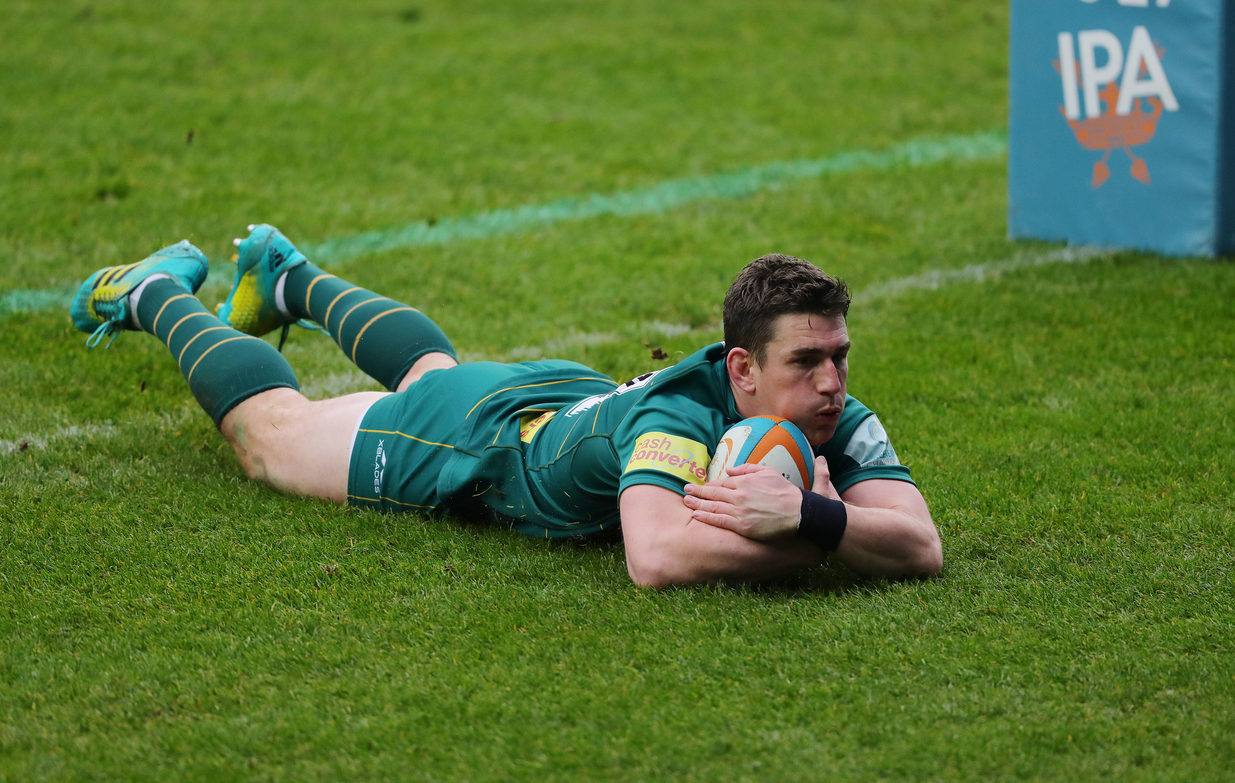 London Irish scored eight tries on their way to a bonus-point victory over Coventry Rugby in Round 15 of the Greene King IPA Championship.
Debutant Ian Keatley gave the Exiles faithful an early taste of what he can add to the squad. With only 2 minutes on the clock, the Ireland international exploited a gap in the Coventry defence to sprint clear and slide over the try line. Keatley popped over the conversion to move Irish’s lead to 7-0.
Keatley continued to impress the Madejski crowd as he showcased his impressive work-rate with a string of hard tackles.
Irish dominated possession but, it was Coventry Rugby who were the next to add to the scoreboard. Fly-half Dan Lewis slotted home a penalty on 26 minutes to reduce the deficit to 7-3.
With 26 minutes on the clock, Keatley was subject to a ferocious collision with Coventry full-back David Halaifonua. The Irishman went down hard but, thanks to the fantastic and quick work by the London Irish physios, managed to walk off the pitch to a standing ovation.
On 30 minutes, scrum-half Brendan McKibbin took the ball from the back of a rolling maul to squeeze over the line and move Irish’s lead to 12-3. Keatley’s replacement Jacob Atkins took on the kicking duties, added the extras and the score stood at 14-3 in Irish’s favour.
Coventry’s second-row James Voss was shown a yellow card by referee Matt Turvey for slowing the play down illegally to reduce the visitors to 14 men.
Just a minute later, Irish capitalised on the extra man through Dave Porecki. Another unstoppable rolling maul crashed over the line, with Porecki the ball carrier. The Exiles lead stood at 19-3 on 36 minutes, with Atkins’ conversion just sliding past the far post.
On the stroke of half-time, number 8 Matt Rogerson forced his way over the line but was judged to be held up and the half-time whistle blew.
The second half started with a scrappy few phases, but a moment of magic from London Irish Academy graduates Jacob Atkins and Ollie Hassell-Collins changed that.
Atkins kicked a perfectly weighted cross-field kick into the arms of the flying Hassell-Collins to slide over the visitor’s line and grab Irish the bonus-point try. The conversion from the touchline missed by inches so, the score was left with Irish leading 24-3.
McKibbin turned supplier on 52 minutes to set up Fijian international Albert Tuisue. A darting run from the scrum-half and a perfectly timed pass ensured a first try in the Exiles jersey for Tuisue. Atkins added the extras to extend the lead to 31-3.
Irish were handed a stumbling block in the form of a TJ Ioane yellow card with 56 minutes on the clock. The Samoan international was sent to the bin for a professional foul as Coventry looked to apply pressure.
Just one minute later, Coventry made the extra man count and Tom Jubb crossed for their first try of the day. Lewis struck the conversion through the posts to reduce the Exiles lead to 31-10.
Coventry used their momentum to make Irish pay just one minute later. This time, Scott Tolmie broke clear to touch down. Lewis again added the extras leaving the score 31-17.
With Coventry’s tails up, the Madejski Stadium crowd rose to give the home side an extra push.
This proved to be the difference as Tom Stephenson went on the offensive. The inside centre broke four tackles before going wide for Hassell-Collins to score his second try of the match.
Atkins smashed his touchline conversion through the posts to extend the Exiles lead once again. Heading into the last ten minutes, the score stood at 38-17 in the Exiles favour.
Alivereti Veitokani got the crowd on their feet with his quick feet before chasing a chip through and making a crunching tackle. From the next phase, replacement scrum-half Scott Steele forced a penalty with a turnover at a breakdown and earned himself a cheer from the supporters.
On 74 minutes, it was Brendan Macken’s turn to get on the scoresheet. The Irishman broke a string of tackles before cleverly rolling over the Coventry try line. Atkins added the extras to make the score 45-17.
Credit to Coventry, on 77 minutes they got a score back through Pete White. Cleverly slipping through a tackle, White made thee score 45-22 with the conversion missed by Lewis.
However, London Irish’s leading try scorer Topsy Ojo had the last say. Ojo was on the end of some quick hands from the Exiles backline to score in the corner. Atkins touchline conversion was confidently struck through the posts to move the final score to 52-22 in favour of the home side.