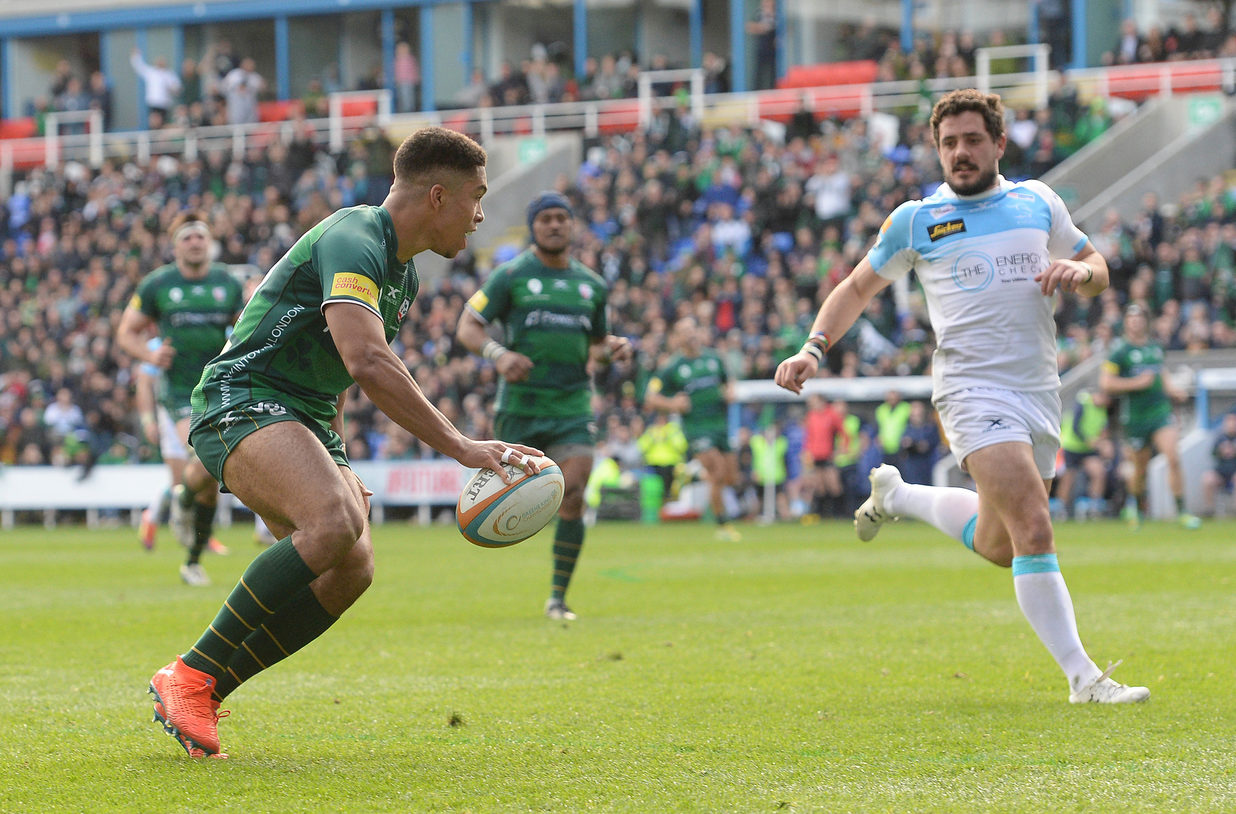 While the eventual winning margin was comfortable, the opening 20 minutes were scoreless, despite plenty of intent shown by both sides.

London Irish were first to come close, Ben Loader showed his stepping and acceleration inside the opening five minutes. He was brought down by Tyson Lewis but it was nevertheless a great position within sight of the whitewash. A scrum was chosen from a penalty, Tom Stephenson looked to go on the outside but Doncaster’s defence held and won a penalty to clear their lines.

Having done the hard work on their own line the Knights soon found themselves in a similar position at the other end of the field. A few penalties in quick succession allowed Doncaster to kick deep, but at the crucial moment the Irish counter-rucking did what it needed to do and Ian Keatley sent play upfield.

Doncaster had two main focal points of attack – either getting the ball wide as quickly as possible or trying to find an opening through the middle of rucks. Both were nullified by green shirts, but Doncaster’s patience with ball in hand was good, too, and eventually this created a dog-leg, which Ollie Stedman exploited to truck it up to the home 22.

However there were many more green shirts than white, the ball rebounding eventually to Keatley to clear. A Knights fumble then handed Irish possession in a fantastic position, but while Terrence Hepetema sent Stephenson through with a lovely offload and Alivereti Veitokani and Ben Loader then found themselves in space on the right in the next phase, the final pass remained elusive.

To that point Doncaster’s line may have not been broken, but the momentum was looking ominous for the Knights, and a minute into the second quarter the dam was broken. Luke McLean made a physical break up the left wing, and when the ball was quickly worked right a trademark swivel of the hips from Stephenson took the centre clear and over the line.

Four minutes later the lead was doubled, Albert Tuisue finishing the job after Matt Rogerson had driven to just shy of the line, with Keatley converting both.

Despite conceding the two sucker-punches Doncaster remained positive, Stedman and Mat Clark making physical breaks to take their team to the home 22. And their effort was rewarded when Charlie Beech went over.

Doncaster’s direct approach had paid dividends, but when they tried something a little bit different it backfired. Dwayne Polataivao spotted a bit of space behind a maul and chipped for Wilson to chase. But the kick was long, Loader collected the ball on the bounce, and after assessing his options for a split second showed lightning quick acceleration to take him through the chasers and all the way to the try line.

Irish came out of the blocks firing after the break, McLean showing physicality, pace and an eye for a gap to take his team deep into the visitors’ 22. The forwards took play within inches of the whitewash, Loader was denied by a great Lewis tackle, and when a penalty was sent to the corner Dave Porecki marked his 50th appearance by coming up with the ball for his 10th Championship try of the season.

Having conceded a try before the break by varying their approach, the Knights went back to Plan A in their first attack of the second half, Josh Tyrell the first of several big men to make a dent in the home rearguard.

For their part Irish were looking to stretch play at every opportunity. Keatley sent a kick which just eluded the chasing Alivereti Veitokani, and Loader combined with Ben Meehan with a pacy attack.

And it was this approach which brought rewards, Hepetema putting Loader through a gap for another eye-catching break. Stephenson was on the end of the move for his second, and when Keatley sold a dummy to go over the line with 12 minutes to go the game as a contest was over.

To their credit Doncaster kept on coming. Stedman’s physical performance rewarded with a try with seven minutes to play, and Cameron Cowell turned on the afterburners from the kick off, the break only ended when the replacement winger was shepherded into touch.

At the other end of the field Brendan Macken twice came close, and Tuisue was denied a second by a forward pass. Instead the final word went to Barney Maddison, who crashed over from close range three minutes from time.