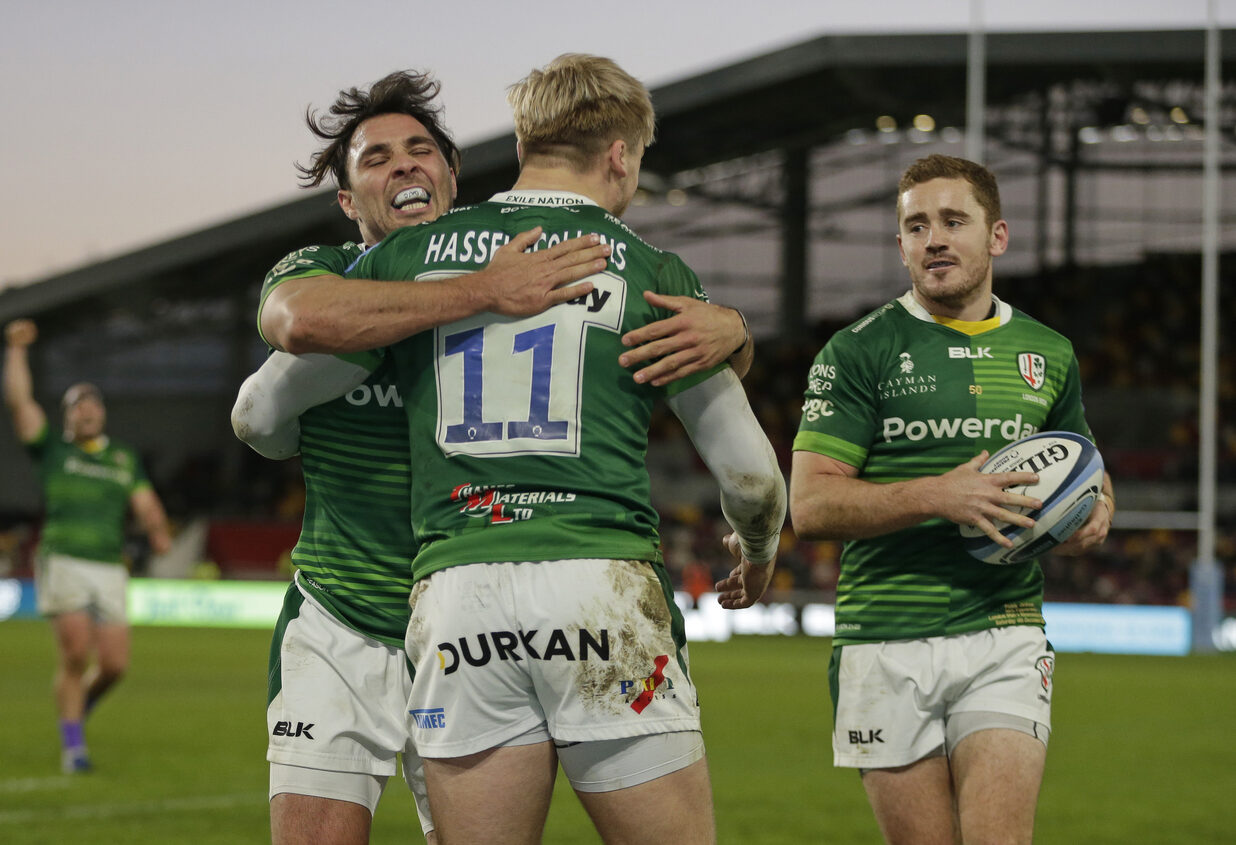 London Irish picked up where they left off at The Stoop with a commanding 43-21 bonus-point triumph over Newcastle Falcons, solidifying their top-eight credentials in the Gallagher Premiership.

The Exiles set the tone in the frantic opening proceedings, Kyle Rowe and Ollie Hassell-Collins dotting down in the first ten minutes with the latter’s second and Steve Mafi’s effort grasping the bonus-point in the first-half.

Agustin Creevy assisted Hassell-Collins’ third, whilst also adding his seventh try of the campaign, to cap off a commanding 80 minutes for Declan Kidney’s boys in green.

Irish got off to a lively start, following some traded kicks into the backfield Rowe was first to penetrate into the visitors 22 but Falcons did enough to usher the Exiles away with each phase.

Irish, and Rowe in particular, came back stronger and more determined, with the Scottish speedster feigning his way through the heart of the Newcastle defence to dot down under the posts.

Declan Kidney’s men continued to expose their opponent’s brittle backline, as Hassell-Collins took off from the 10-metre line in his own half to evade multiple bodies and cross the whitewash, Paddy Jackson adding his second conversion of the affair.

The Tynesiders maintained pressure in the red zone following a brutish scrum that saw them win their first penalty, with Mike Brown losing control of the ball after meeting Rowe’s resolute tackling.

Newcastle did eventually break through via lock Sean Robinson, who was on the receiving end of a smart dummy from Will Haydon-Wood to create space for the former to score.

A 7-point deficit did not last long, nonetheless, as Jackson located Hassell-Collins in the left wide channel with a pinpoint looping pass for the winger to register his brace nigh-on thirty minutes, the Irishman nudging over the extras from the touchline.

Second-row forward Mafi started and finished off the move that secured his side’s try-bonus point before the break, stealing a lineout deep into Falcons territory before bundling over from a ruck that was just short of the try line several phases later.

It was instead Newcastle who recorded the last score of a free-flowing half of rugby, England international Callum Chick picking up from the base of the ruck to touch down with Haydon-Wood’s conversion bringing the scoreline to two converted tries.

Jackson elected to split the posts in the opening minutes of the second period, creating ample room between the teams on the scoreboard in what was sure to be another cracking final 40.

Sure enough, Hassell-Collins completed his hat trick to round off a fast break for the Exiles which started on the opposite wing with Rowe, Augustin Creevy turning provider with a neat one-handed offload to the winger to score.

Nick Phipps’ smart utilisation of a 50:22 kick meant Irish had yet another red zone entry, but a sixth try of the afternoon via Olly Cracknell was overturned by TMO Wayne Barnes for a double movement by the number 8.

The Exiles’ sixth was not too far away, with try-machine Creevy bagging a score of his own crossing the whitewash a phase after Cracknell had another crack at the try line himself - Jackson adding his sixth successful kick of the affair.

With it all change with 15 minutes to go, Falcons squandered a chance for a catch-and-drive score after an overcooked lineout, followed by a stray pass from Chick evaded a free Mike Brown to find touch.

Debutant off the bench Juan Martin Gonzalez forced a turnover of possession at the breakdown, a sign of things to come for the exciting Argentine prospect.

The ever-present threat of Adam Radwan was able to leave his mark on the game with a try of his own, spotting a gap in midfield to dance his way through to the try line for the last impactful action of the game.