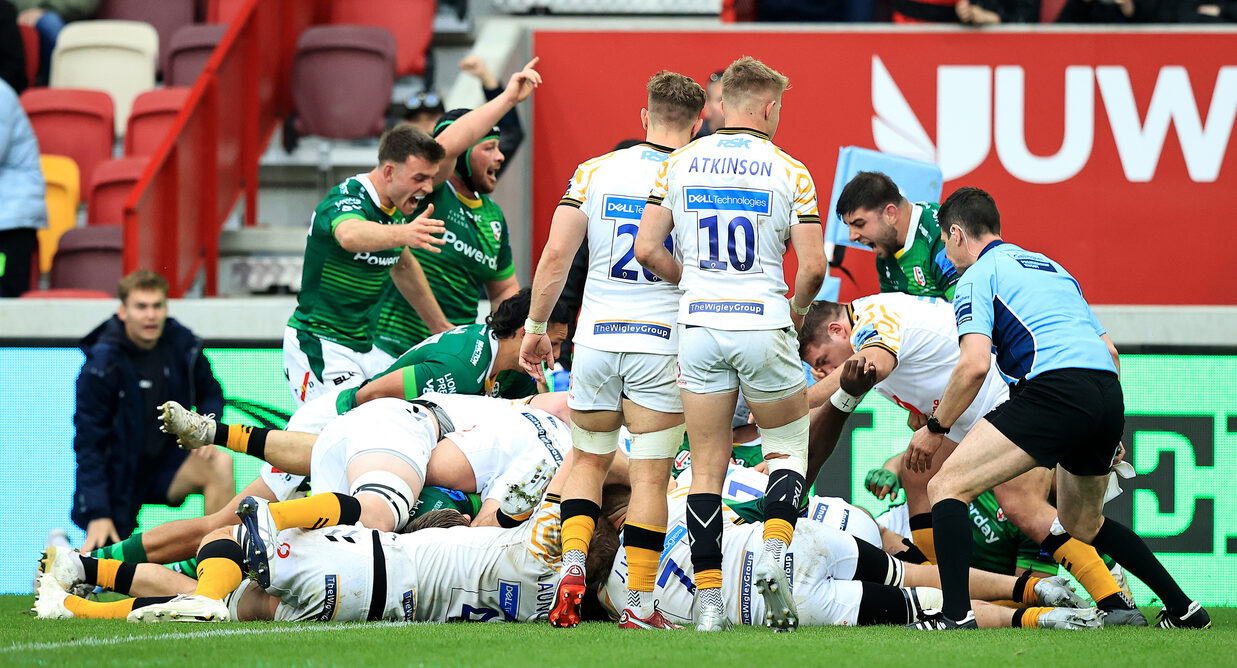 London Irish executed one of the most thrilling turnarounds in league history this afternoon in Round 24 of the Gallagher Premiership, coming back from 14-39 down in less than 20 minutes to level scores at 42-all at full-time.

The Exiles were level with the visitors after opening scores from two of the back three ensemble in Kyle Rowe and Tom Parton, but Lee Blackett’s men took a 14-24 lead into the break.

Wasps came out the better of the two sides in the opening of the second period, Francois Hougaard, Charlie Atkinson and Zach Kibirige taking them to a 25-point lead.

The mother of all fightbacks from the Exiles in the final quarter saw Irish cross an astounding four times with tries from Tom Pearson, Henry Arundell, Ollie Hassell-Collins and the all-important penalty try to nullify Jacob Umaga’s late penalty kick.

Nick Phipps’ diligent chase from a Kyle Rowe kick saw Irish earn back possession early on as the Australian’s opposite number Dan Robson didn’t release, but the Exiles were charged with facing a resilient backline thereafter.

There was nothing doing for the home side and a Curtis Rona knock-on concluded the Irish assault, and Wasps were in to capitalise with 15 minutes gone.

Gabriel Oghre was at the bottom of the Wasps heap after a catch-and-drive effort from the Midlanders and Jimmy Gopperth put away the extras.

Rona was held up over the line not long after, but Irish were not behind for long either.

Sean O’Brien collected the goal-line clearout and the next phase saw the ball worked out to Kyle Rowe, passing to Tom Pearson who offloaded gorgeously to Benhard Janse van Rensburg to set the South African away.

The centre was eventually caught on his venture down the right wing but an offload inside, this time to Rowe, set away the Scotsman to the line and over, Paddy Jackson bringing things all square from the tee.

Wasps threatened once again from the lineout but Phipps pilfered back possession excellently on Robson again, creating an Irish breakaway but van Rensburg was forced into touch in a thrilling encounter now heating up.

A knock-on in midfield from Wasps saw Irish with the put-in, and the Exiles hit the openside with a well-executed drill off the Hazelwood pitches with van Rensburg at the heart of it once again.

A pinpoint kick from his hand found Ollie Hassell-Collins out wide, taking two bounces before reaching the young prospect who made excellent ground before passing back inside to Tom Parton to score- simply breathtaking rugby.

The visitors used a strong set-piece as their platform once again from a five-metre scrum after the ball went dead in Jackson’s possession, Robson passing out to Francois Hougaard to run clear into the goal area.

Charlie Atkinson put Wasps back in front, shadowing Robson off the back of another rolling maul to cross the whitewash as Gopperth added his third conversion.

Gopperth split the posts before half-time to give Wasps a ten-point cushion after Robson’s forced kock-on on Phipps.

Wasps took the first vital score of the second-half through Hougaard, the winger found in space on a big overlap for the Black and Golds to cross over but Gopperth was unable to add the extras.

The veteran Kiwi’s placed kick after did nonetheless give Irish a mountain to climb by taking arrears to over two converted scores.

It soon became three with Josh Bassett’s searing run into the Irish 22, teasing a pass to Zack Kibirige to eventually transfer possession to the full-back to score.

No sides have scored more tries in the last 20 minutes of matches in this season’s Premiership than London Irish (28), so the Exile Nation could be forgiven for believing late on but what was to come could not have been more dramatic.

Irish had more in them, Tom Pearson recovering well from a Hougaard tackle in the previous phase where his offload to Hassell-Collins bore no points and play was brought back for a Wasps offside.

Jackson found touch and Pearson maneuvered off the following lineout to bundle over, the Irishman scoring his third conversion of the afternoon.

Replacement Henry Arundell found his rhythm immediately to take Irish to what could be a vital try bonus point, executing what is becoming a trademark chip-and-chase score as the lead was cut to 11 with Jackson’s conversion.

If the Exile Nation didn’t believe then, then they did when Ollie Hassell-Collins scored to send the BCS into raptures with Arundell playing a big hand in the try to offload to the winger on his native left channel.

Irish were however penalised at the breakdown after the restart for not releasing and replacement Jacob Umaga took the three points to alleviate pressure- briefly.

A monumental effort with what seemed like every Irish player at the ruck saw possession turned over in Irish’s favour and with the game in the balance by seven points, Paddy Jackson sent the Exiles into the corner.

A dominant maul took Irish over but Craig Maxwell-Keys was unable to see clear grounding, but what was clear was the green maul being brought down and a penalty try was awarded to take Irish level with the clock in the red.

Irish now sit a point ahead of Wasps in eighth in the Gallagher Premiership, having played a game more than their former London rivals.

One of the best finishes to any Gallagher Premiership game you will ever see, in the theatre of drama that is the Brentford Community Stadium.