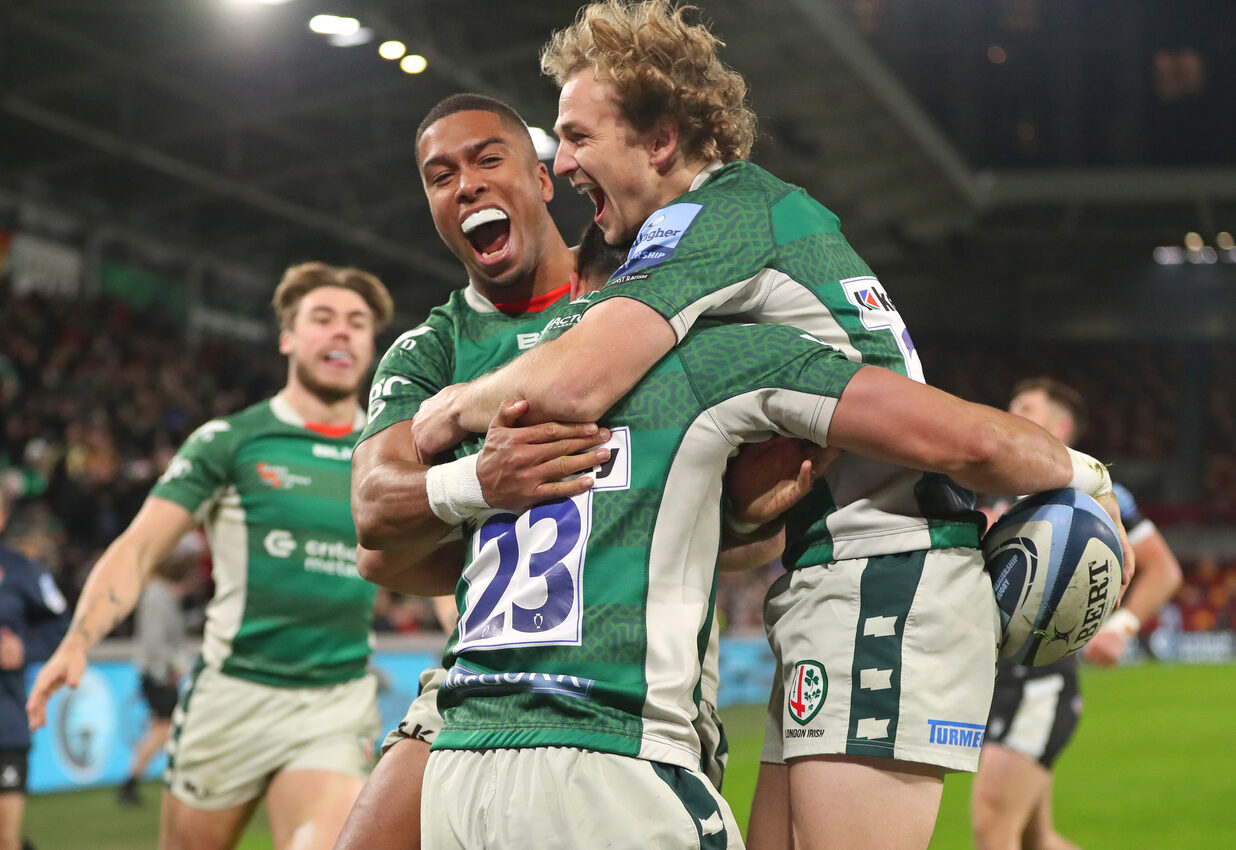 A return to home brought with it a return in the win column for Declan Kidney’s Exiles, London Irish taking a 39-17, bonus point victory against Newcastle Falcons in the twelfth round of the Gallagher Premiership at the Gtech Community Stadium.

A close first half saw Irish 13-7 ahead at the interval, two Paddy Jackson penalties were accompanied by a James Stokes score to cancel out Mateo Carreras’ score.

Brett Connon’s boot and Guy Pepper’s try off the rolling maul sent Falcons into the lead for the first time in the game, but an inspired remaining forty minutes saw the Exiles advance to a big lead.

Second-half efforts from Jackson, Adam Coleman and a Lucio Cinti brace saw Irish to a vital second win of the Premiership season.

Two dead balls from Newcastle Falcons in the opening five minutes of play stunted any growth in attack for the visitors, Irish putting out a good set in each of the following scrums.

The Exiles won a penalty at the set-piece and then went to the corner, gaining the advantage from the rolling maul before electing for another touch finder.

Facundo Gigena’s manoeuvre off the rolling maul brought his side close, but the Boys in Green worked wide through Paddy Jackson and then to James Stokes, finishing under contact from three Falcons, with Jackson then slotting the extras.

A penalty won in midfield for the traveling outfit afforded an opportunity to go for touch, going deep into Irish territory but was intitially shunted backwards and wide by a good counter maul.

The ball was spread and Adam Radwan’s work with ball in hand drew Irish defenders, spreading wide for Mateo Carreras to dot down as Brett Connon’s conversion levelled proceedings.

Elliot Obatoyinbo and Radwan asked questions down the right edge but good industry from try-scorer Stokes saw the Falcons Academy product out of play.

Juan Martín González showed just as much diligence without the ball, forcing a turnover over the ball to relieve some pressure, and with the northerly side caught offside in the following phases, Jackson slotted a placed kick to regain the lead.

A smart running line by Callum Chick penetrated through the Irish rearguard, but when the ball was recycled, Ollie Hassell-Collins was on hand to jackal the ball back.

An excellent run from the English winger through midfield advanced Irish after being on the receiving end of a pop pass from Jackson, and working with an advantage, Declan Kidney’s men went for the corner.

The ball was worked from right to left and back again, Will Joseph running clear to the whitewash but was brought down short of the line.

Just before the break, Irish went into the corner once more and with a nice move off the lineout, Josh Basham was first receiver to crash inches within the line but the home outfit elected for three more points through Jackson as play was brought back.

Newcastle held the advantage in play as the team were welcomed back in to the second half, reducing the deficit from six to three points from the boot of Connon after an offside infringement.

Captain Mickey Young was brought down by González short of the line after a linebreak from Ben Stevenson, but they were soon over from a catch and drive move finished off by Guy Pepper to retake the advantage.

Mike Willemse’s collection of a loose lineout set Irish on their way and was brought down with a high tackle as his team worked with the advantage from referee Wayne Barnes.

Irish’s determination was prevalent now, and Paddy Jackson reversed the scoreline to dive through the posts after a smart offload from Hassell-Collins, converting his own effort from under the uprights.

A penalty conceded for blocking by Newcastle gave Irish a foothold, pushing up the park with fluid passing off the lineout move.

Only one recycle of the ball was required to get the next try, Ben Loader locating replacement Lucio Cinti on the right wing to dot down with another brutish finish in contact.

Irish was now eight ahead, but Falcons felt there was more in the tie for them in the fourth quarter and consistent offside penalties saw the latter Club into the corner but strong defensive sets repelled the for the time being.

But with more penalties being conceded, more backs to the wall braun was required, arriving in the form of counter-rucking from Chandler Cunningham-South and Ben White, who was soon to be replaced by Joe Powell.

A speculative punt from Hassell-Collins from his own half bounced before touch to see the game’s first 50:22, paying off well as Irish were quick off the lineout with Jackson, his 44th mispass of the season, out to Willemse who was tackled with no arms.

The ball was worked to another replacement, the returning Adam Coleman, to dot down for Irish’s try bonus – Tom Penny penalised for the earlier penalty on the South African hooker with Jackson’s extras stretching Irish 15 to the good.

A move to the corner saw Irish work from left to right again, league-leading Jackson adding his 45th mispass out to Cinti, to cross over and all but secure all five points for Irish.

Falcons tried and failed for a third try, but an excellent set for the Boys in Green was completed with a Danilo Fischetti turnover to complete the 39-17 win!