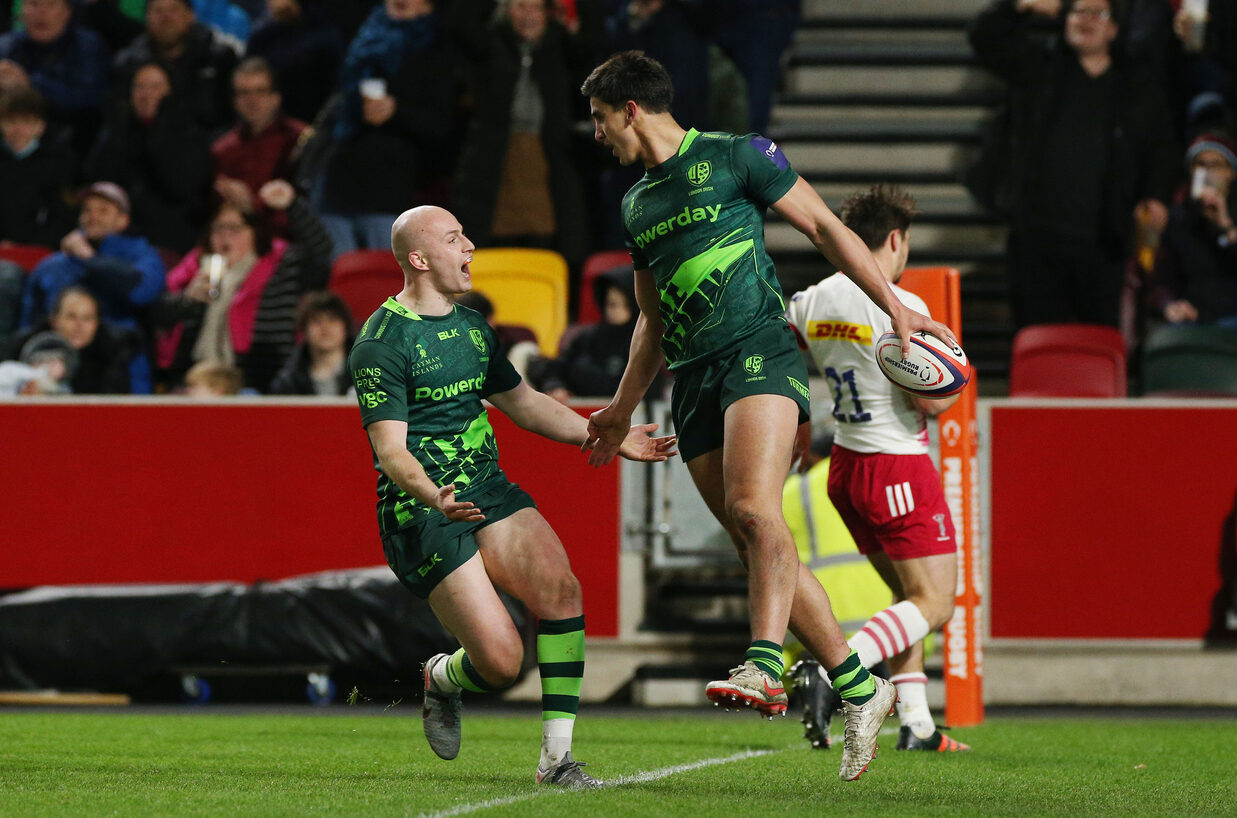 London Irish took the derby day spoils against Harlequins this evening under the Friday Night Lights, running in five tries to finish up 34-19 in the fourth round of the Premiership Rugby Cup.

It was the first time the Exiles’ have completed three successive Cup wins as a Premiership side since the 2001/02 campaign, with forward pairing Albert Tuisue and Mike Willemse leading Irish to a 17-12 lead at the interval.

Tom Parton’s long-awaited return to the field after an injury suffered at the Coventry Building Society Arena against Wasps was marked with a try for the lively full-back on his homecoming.

Despite some loose handling from Irish in midfield, the pack made up for it with successive scrum penalties won in the early first stanza, which saw the Exiles retain more of the ball.

The hosts were meeting the gain line and then some in attack with dominant carrying, and Albert Tuisue’s opening score was no different, who made his first Cup start since 2019.

Irish’s number eight was first receiver off a deep lineout in Quins’ territory and hulked through the away rearguard to touch down, Noel Reid then registering his first points in his nascent Irish career from the tee.

Harlequins looked to have their say within the first quarter and did put Irish under the cosh defensively, but resolute defence eventually allowed for Santiago Garcia Botta’s knock-on for Irish to clear.

Hammond himself was over in the corresponding corner minutes later to hand his side their first lead of the tie, former Exile Scott Steele employing Quins weapon of choice again from the boot to find the second-rower.

Irish’s dominance at the set-piece gave them an opportunity to claw back some of the five-point arrears and Hugh O’Sullivan did so from the tee at the 22 metre line.

A fifth scrum penalty of the opening half gave Declan Kidney’s men some relief late on, and quick advancement up the park led to a lineout drive finished off by Mike Willemse to nab the lead at the break.

On his first appearance in 2022, Tom Parton capped off the occasion with a well-earned five-pointer for the Exiles after several phases of build-up, finishing with an outstretched arm.

The Exiles were on the hunt for an all-important bonus-point try, and through Tuisue’s penetrative running they were looking dangerous, but it was fellow-back-row partner Matt Rogerson who crossed for Irish’s fourth.

The captain took Englefield’s pacy ball from the ruck capably and powered beyond the whitewash and into the goal area.

Quins’ replacement scrum-half Lewis Gjaltema pounced over from short distance with a little over ten minutes remaining in an attempt to keep the contest alive, with Chisholm adding his first two from the boot.

Vital interventions from Cillian Redmond and Kyle Rowe on Hayden Hyde and Huw Jones respectively at the try line kept the threatening visitors at bay in the closing minutes.

Rowe’s collection of a Harlequins punt offered the flying Scotsman ample space to try one of his trademark blazing runs, and was ominously accompanied by Lucio Cinti.

The Argentine finished off a kaleidoscopic attack in his first Cup appearance and in turn, the convincing win over our west London adversaries.

It was Irish’s first back-to-back wins against Harlequins since the 2017/18 league double, with our home league fixture yet to be played at the Brentford Community Stadium in two weeks time.