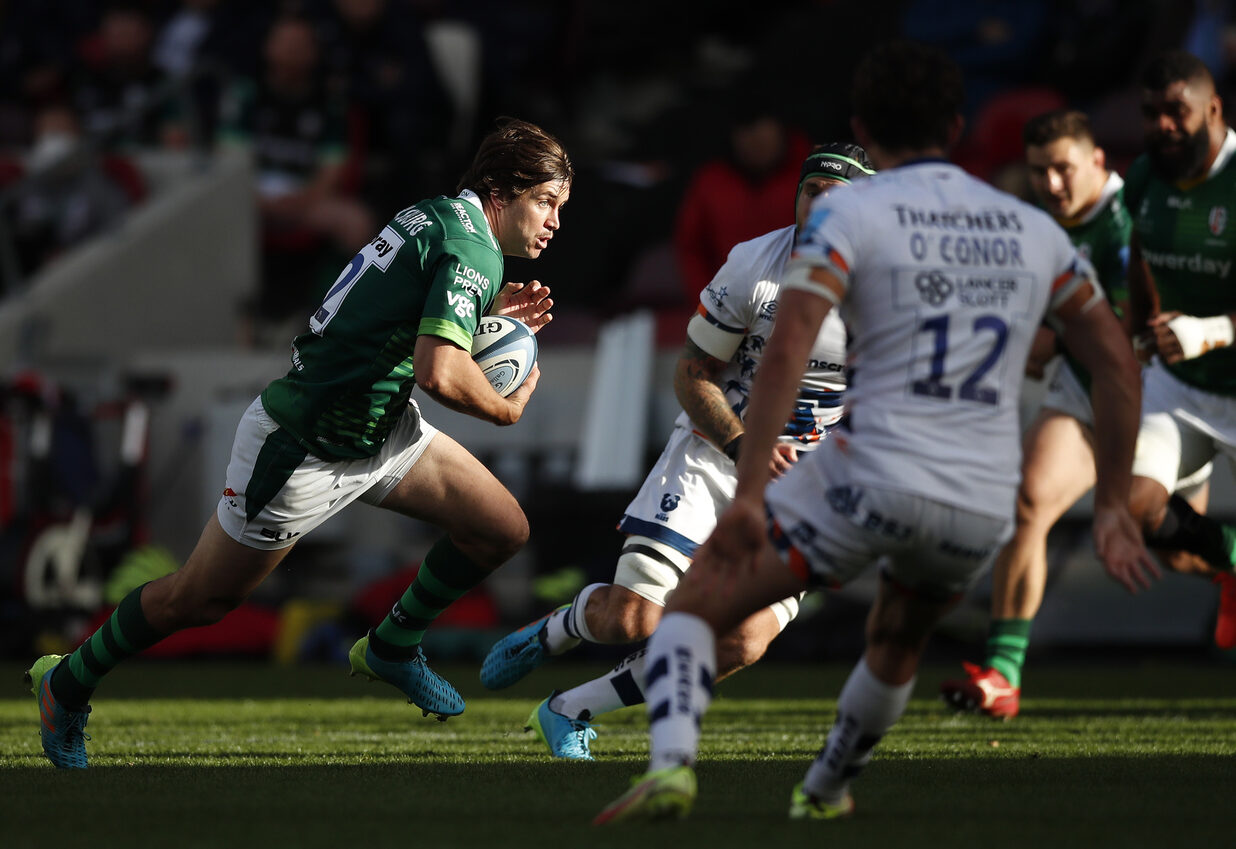 London Irish were beaten 45-33 by Bristol Bears in Round 7 of the Gallagher Premiership.

In an entertaining spectacle at the Brentford Community Stadium, the Bears – last season’s table-toppers – came out on top to register their second win of the season.

On a sunny October afternoon in the capital, the opening exchanges were nip and tuck.

It was Bristol who got the opening score of the game in the 11th minute though – Jake Heenan going over from a rolling maul.

That score came largely against the run of play – but when Bears scored again four minutes later, they were firmly on top.

From a break out wide, Toby Fricker was in the right place at the right time to dot down unopposed. Callum Sheedy added the extras.

Bad turned to worse for the hosts two minutes later, when – from another swift move – Jack Bates coasted through for another try, leaving Irish with it all to do, trailing 19-0.

Undeterred, from the next passage of play, Irish went over for their first try of the match.

After numerous phases of possession deep in Bears territory, Tom Parton offloaded the ball to James Stokes, who bustled his way over the line.

Buoyed by that score, the Exiles were back on the front foot straight away.

The hosts were a man down on 31 minutes, Heenan seeing yellow after Irish were awarded a handful of penalties in quick succession.

Despite their numerical disadvantage, Bristol – to their credit – weathered the storm.

Soon after, the visitors were reduced to 13, however, when Charles Piutau was sent to the sinbin for a deliberate knock-on, with Ollie Hassell-Collins bearing down on the try-line inside the 22.

Remarkably, Bristol were down to 12 men three minutes before the break, this time it was scrum-half Andy Uren who was give his marching orders to the bin.

A second Irish try had been coming – and it arrived on 38 minutes, when Mike Willemse dashed over from a well-worked line-out move, with Paddy Jackson adding the extras.

That brought an end to an eventful half of rugby.

The drama continued to unfold at the start of the second period – with Irish scoring a third try of the afternoon inside the opening 60 seconds of the half!

Referee Matt Carley was having a busy day – and on 47 minutes, he showed a fourth yellow card of the afternoon, with Albert Tuisue penalised for a high tackle.

With Bristol now back to their full complement, they forced their way back in front – Piers O’Conor touching down, with the try given following a lengthy TMO. Sheedy kicked the conversion to make it 26-19 to the Bears.

The visitors increased their lead on 57 minutes, replacement Harry Thacker going over under the posts, with Sheedy adding two more.

Irish were up against it now, with Sheedy kicking two penalties in quick succession to extend the Bears lead to 20 points.

The hosts kept plugging away though and they were rewarded ten minutes from time, when a superb counter-attack ended with Terrence Hepetema crossing the try-line, after some well-worked backs play.

Sheedy was back at it again though moments later, kicking his third penalty of the afternoon, to dent any hope Irish had of getting back into the game.

But this Irish side keep going, and replacement Kyle Rowe reduced the deficit yet again, going on a mazy run from inside his own half to score. Jackson added two more.

The final points would go the way of the Bears though, Sheedy taking his own individual tally to 20 points for the afternoon, as the visitors registered a 45-33 victory.