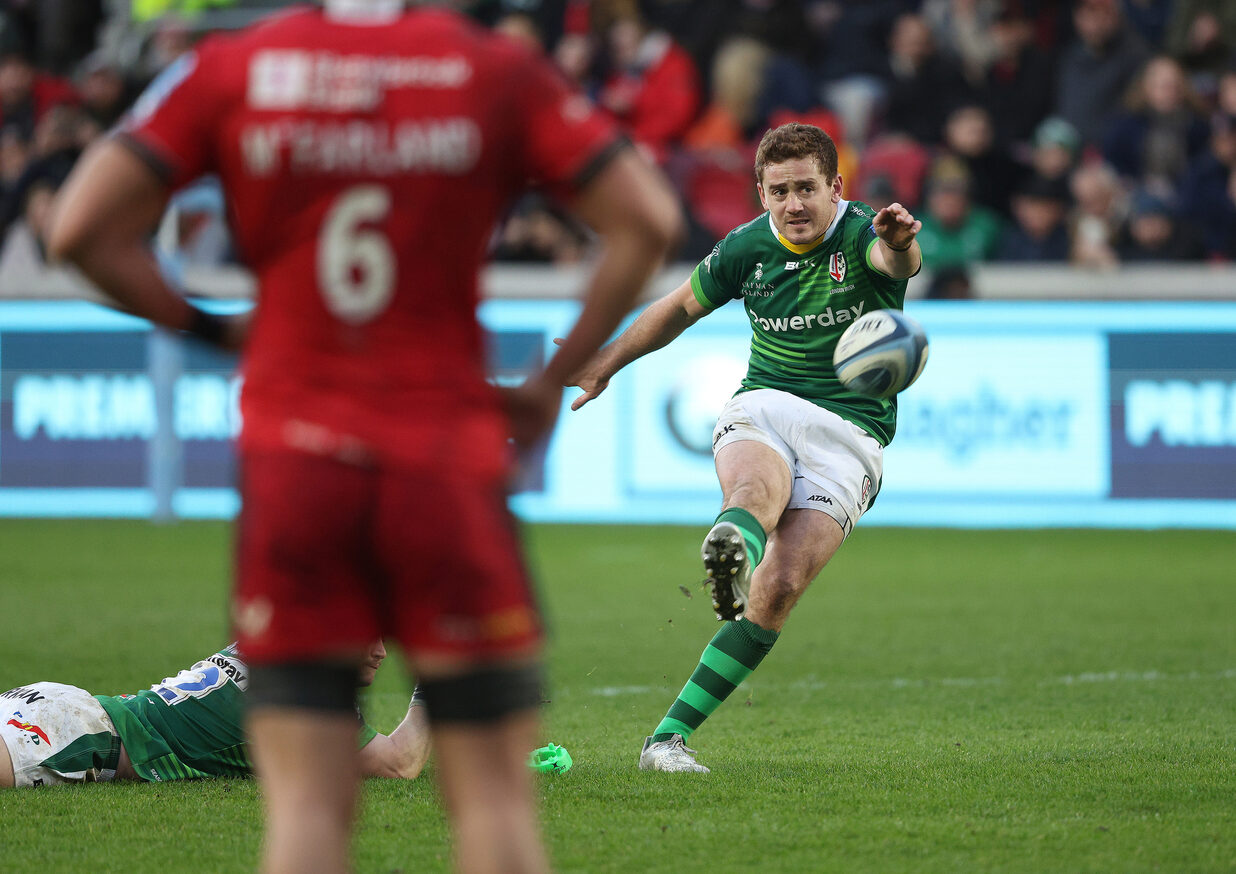 London Irish secured another famous London derby triumph in front of a rocking Brentford Community Stadium, Paddy Jackson’s penalty in the final throes of the tight game securing the 32-30 victory over Saracens.

Benhard Janse van Rensburg was on hand to register a first-half brace to take Irish to a 12-10 lead come half-time, despite Tom Woolstencroft bundling over late on in the half.

Adam Coleman wasted no time when returning to the pitch with a charge down effort, but a score from Rotimi Segun brought the visitors back into the game.

Ollie Hassell-Collins bagged the try bonus with Irish’s fourth of the afternoon, but Saracens took their first lead of the match with two minutes left through Nick Tomkins’ converted try- the boys in green fought back with what little time there was left which culminated in Jackson’s most important three points of the afternoon.

The first half got underway with a well executed turnover ball from a kick and chase which saw Irish breach into Saracens territory for the first time, with Curtis Rona then finding his midfield partner Benhard Janse van Rensburg in the wide left channel to dot down with just two minutes gone.

Alex Lozowski chipped away at the scoreboard from the tee and decided to do so again a matter of minutes later, this time from beyond halfway but did not have the same fortune a second time around.

Following a deliberate knock-on from Billy Vunipola, Paddy Jackson’s kick from hand situated his side deep into the opposition 22, and whilst the rolling maul bore no points, several phases later Irish were in again with a tried and tested combination.

It was that destructive pairing of Rona and van Rensburg that again unlocked Saracens, the South African crossing the whitewash on the right wing for his brace with Jackson converting this time.

Saracens were over for their first try of the afternoon via Tom Woolstencroft just before the interval, the hooker touching down from a rolling maul with Lozowski adding the extras.

The Exiles were however afforded one last crack at the try line before the first forty minutes were up, Sean O’Brien was the man looking to finish the half off on a high after a neat turnover on halfway, but was held up with the clock in the red.

Declan Kidney’s men made up for it with less than a minute on the clock into the second-half, when Adam Coleman charged down replacement Ruben de Haas’ box kick, Jackson’s conversion taking the Irish lead to nine points.

After extending their lead, the home side were tasked with soaking up Saracens unrelenting pressure, which eventually told after O’Brien was sent to the sin bin and Lozowski added three points to his tally.

With Sarries having been penalised at the scrum, it was Jackson’s turn to brave a kick from beyond halfway and the Irishman made no mistake to restore the nine-point swing.

The North Londoners resumed determined as ever, and with men over the far side Ben Earl assisted speedster Rotimi Segun to dot down despite James Stokes’ best efforts, Lozowki’s kick from the tee striking the right upright and over.

Industrious running from front-row pairing Ollie Hoskins and Will Goodrick-Clarke forced the Saracens rearguard into retreat, and with a quick recycle of the ball Ollie Hassell-Collins was over for the bonus-point try in the left corner, with Rona getting a hat-trick of assists and Jackson adding another impressive touchline conversion.

The visitors’ 13 brought the deficit back to just six with as many minutes remaining, and former Exile Alex Lewington’s fast breakaway threatened to give Saracens their first lead of the affair but he was stopped in his tracks by a recovering Coleman, who was adjudged to have made a dangerous tackle and was consequently sent off.

Nick Tompkins peeled off a subsequent rolling maul to cross over and set up Lozowski with what could have been the decisive kick, as the centre split the posts to take them into a one-point advantage.

The never-say-die attitude of this London Irish outfit meant the game was not over until Hamish Smales’ final whistle blew, and sheer grit and determination saw Ollie Hoskins retrieve the ball back with Irish then working their way through the phases.

The match was won through the boot of Paddy Jackson after an offside to conclude another thriller in TW8, kicking the Exiles to another brilliant victory in front of the posts to project Irish to fifth in the Gallagher Premiership.